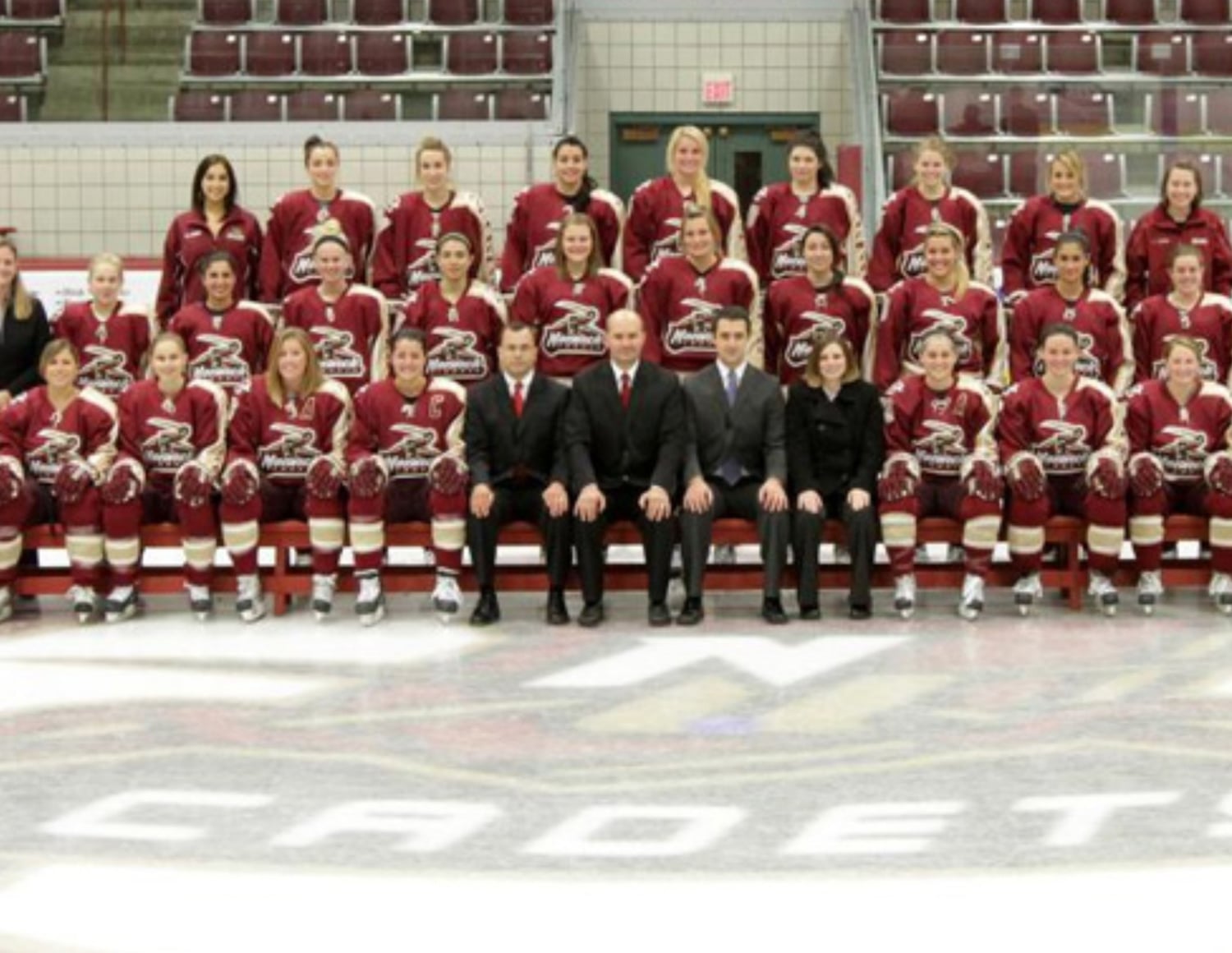 This year’s homecoming will for the first time feature two Hall of Fame induction ceremonies; the Class of 2020 will be formally inducted Sept. 23.

Here are the inductees:

Cindy Fortin ’11 — Fortin, who tended goal for the Cadets’ first national championship in 2011, is the second women’s ice hockey player chosen for the Hall of Fame. In four years as the team’s starting goalie, Fortin posted a 50-25-7 career record, a .910 save percentage, a 2.18 goals against average and 16 shutouts. She ranks first all-time in games and minutes played for a goaltender, first in saves, second in career wins and third in shutouts.

Christine Daniels Giannone ’11 — Daniels had a decorated four-year career on the women’s basketball team, becoming the Great Northeast Athletic Conference (GNAC) Player of the Year as a senior. She led all of NCAA Division III in double-doubles in 2010-11, compiling one in all 26 games. Daniels also earned New England Women’s Basketball Association (NEWBA) and Eastern College Athletic Conference (ECAC) second-team All-Region honors. She finished her career with 1,149 points and 946 rebounds. Her 380 rebounds as a senior tied for the GNAC single-season record.

This year’s homecoming will for the first time feature two Norwich Univiersity Athletics Hall of Fame induction ceremonies. The Class of 2020 will be formally inducted Sept. 23.

Michael Dan Mori ’91 — Dan Mori is one of the most accomplished men’s rugby players in the program’s 50-year-plus history. He was a four-time All-New England Team selection, two-time All-Vermont Team selection. He earned USA Rugby East Collegiate All Star honors and an invitation to the Eastern Conference All-Star Camp in 1989. In 1988, Mori was named to an All-New England team that toured Australia.

Robert Goodman ’86 — Goodman is the first of two Distinguished Letter Winners in this year’s class. He was a three-year member of Norwich University’s wrestling program, serving as a co-captain in his junior and senior seasons. Goodman tied for the most pinfalls on the team as a sophomore and earned the Coaches Award as a senior. He placed third at the New England Championships as a junior and fifth as senior, twice earning All-New England honors.

Chris Munn ’81 — Munn, who will be inducted posthumously, is the other Distinguished Letter Winner in this year’s class. Munn led the men’s rugby team in scoring as a junior and senior, was team captain in 1980-81 and was nominated to the New England Rugby Football Union All-Star squad in 1980. Munn was diagnosed with amyotrophic lateral sclerosis in 2013 and fought a courageous battle until he died in January 2020. The men’s rugby program established a spring 7s tournament named in Munn’s honor after he was diagnosed.

Ken Steblin ’71 — Steblin was a star in the Norwich men’s lacrosse program’s early years, earning first-team All-Colonial Division honors and first-team All-New England honors. During the 1970 season, he led the team with 13 goals and 29 assists for 42 points; the next closest player on the team had 23 points. The Cadets went 5-2 that season, beating Dartmouth, St. Michael’s, Plymouth State, New England College and Castleton.

Tony Mariano — Mariano, who will enter his 44th and final year at Norwich and his 30th as athletic director in 2021-22, is this year’s honorary Norwich Athletic Hall of Fame inductee. During Mariano’s tenure, the Cadets have won 12 national championships, including the first title of any kind in school history in 2000, and have won 75 conference championships. Also during his tenure, 16 Norwich student-athletes earned College Sports Information Directors of America Academic All-American honors for excellence in the classroom and athletics. In 2018, Mariano was named a National Association of Collegiate Directors of Athletics-Under Armour Athletic Director of the Year.

2010-11 women’s hockey team ­— This year’s team inductee into the Hall of Fame claimed the program’s first national championship in its fourth season of existence, topping Rochester Institute of Technology 5-2 in the title game. The Cadets finished 25-4-1 overall and made their second of three consecutive national championship game appearances. The 2010-11 team also won Norwich’s first ECAC East regular-season title, finishing unbeaten in the league at 17-0-1. Sophie Leclerc ’10 was named the ECAC East Player of the Year and an American Hockey Coaches Association first-team All-American after leading the Cadets with 26 goals and 28 assists for 54 points. Julie Fortier ’12, Melissa Rundlett ’12, Jillayne DeBus ’13 and Renee Lortie ’14 all had more than 30 points on the season.