An Esteemed Mind Explores Mysteries of the Brain, Trauma, and Well-being 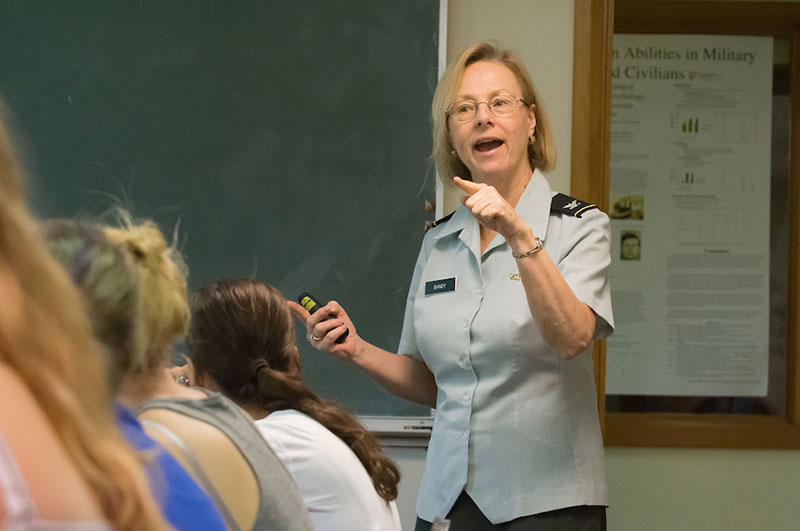 For more than two decades, Norwich University social psychologist Carole Bandy, PhD, has applied her innate curiosity about how the brain works to study real-world problems. Problems such as cultural stereotyping and shooting bias or post-traumatic stress disorder (PTSD).

Working with colleagues on campus and around the globe, she has applied eye-tracking and electroencephalogram (EEG) data studies in novel ways. Her research has helped illuminate how the clothes people wear can activate or suppress a stereotype and how Transcendental Meditation can boost resiliency or reverse PTSD.

Six years ago, the trio published a major study in the journal Social Neuroscience, which assessed how social perceptions and discrimination affect people’s decisions to shoot a gun in a weapons identification task.

Normally a comparison of how so-called “priming” photos of black and white men influence test subjects’ decisions to “shoot” a gun, Bandy and her colleagues were the first to introduce images of Middle Eastern men to the assessment.

The researchers found that clothing, not ethnicity, primed negative stereotypes. A photo of Middle Eastern man dressed in a traditional tunic and turban prompted a much higher error rate in test subjects. (“Shooting” at a photo of a hair-dryer or cordless drill, rather than another gun, for example.) While a picture of a Middle Eastern man dressed in a western suit did not.

“Clothing was the critical variable in discrimination,” Bandy says. “Stereotyping did not occur without it.” Those findings have now been downloaded countless times from Research Gate.

Since then, Bandy has continued to secure five-figure research grants and publish findings in respected journals, all while carrying a full teaching load. The achievement speaks to her drive to explore fundamental questions, even as retirement draws near. “The nature of research is that once you start down a path, the further you go with it, the more it pulls you,” Bandy says.

Many decades into that research journey, those questions have only grown more compelling. Among a raft of ongoing research projects, Bandy remains intently curious about Transcendental Meditation (TM), a practice she first encountered in graduate school over 45 years ago. She is particularly interested in TM’s demonstrated ability to reduce stress, anxiety, and depression and improve critical thinking and mental resilience.

For Bandy, the driving question is why the regular practice of restful awareness works. “Not whether it works. That much is clear,” she says. “But how? What is going in in the brain?”

Using self-report questionnaires, behavioral and eye-tracking tasks, and EEG data, Bandy and her colleagues assessed how individuals in both groups responded to threat. Early adopters of meditation showed lower levels of stress, anxiety, and depression and better critical thinking and mental resilience. These measures improved over time as cadets continued their meditation training, results confirmed in a second study of 60 cadets the following year.

Bandy has shared this research with members of the U.S. military, which has expressed interest in TM’s potential to reduce PTSD in troops entering or returning from combat.

More recently, Bandy has collaborated in two studies with colleagues in Iowa, Rwanda, and South Africa, including the University of South Africa, to measure the effectiveness of TM to treat PTSD in Congo refugees and South African college students. Endemic violence in both countries causes high incidences of PTSD in both groups.

Among students who started TM training, “there were significant drops in PTSD in as little as two weeks,” she says. Bandy notes that by 100 days, nearly all study participants practicing meditation showed sub-threshold measures for PTSD.

Bandy theorizes that transcendental meditation works for a very simple reason. It helps people with PTSD rebalance or optimize the relationship between two areas of the brain: the cognitive frontal area and the more primal limbic system, where our strongest emotional responses, such as extreme anger and extreme fear, originate.

In the future, Bandy plans to start a longitudinal study of Transcendental Meditation at Norwich.

Susan Limberg, a Class of 2015 graduate who commissioned last May into the U.S. Air Force as second lieutenant, was among the Norwich cadets who learned meditation in Bandy’s study. She describes it one of the highlights of her Norwich experience.

“[Carole] has consistently used her experiences as a scholar to informally mentor her Norwich colleagues and to formally mentor a multitude of psychology students,” says David Westerman, a Dana Professor of Geology and Associate Vice President for Research at Norwich.

Raised in Tennessee, Bandy earned her master’s degree from the University of Memphis and her PhD in social psychology from George Washington University. She joined the Norwich faculty in 1995 after serving as principal investigator on a $250,000 grant awarded to the Norwich University Applied Research Institutes to evaluate the effectiveness of a new gunnery training system for the National Guard.

Bandy remains deeply invested in undergraduate research at Norwich, where she was hired to teach junior and senior-year thesis seminars, classes she continues to teach 20 years later. “We are probably the only department in the country that requires [a senior research thesis] of all undergraduates.”

Doing so means students “have to literally be a researcher themselves and that’s the essence of the discipline,” Bandy says.

In recognition of her innovative scholarship and teaching, Bandy was recently named Norwich University’s newest Charles A. Dana Professor by university President Richard M. Schneider. “It’s a wonderful honor,” Bandy says. “It’s the highest honor, really, that a faculty member can get here at Norwich.”