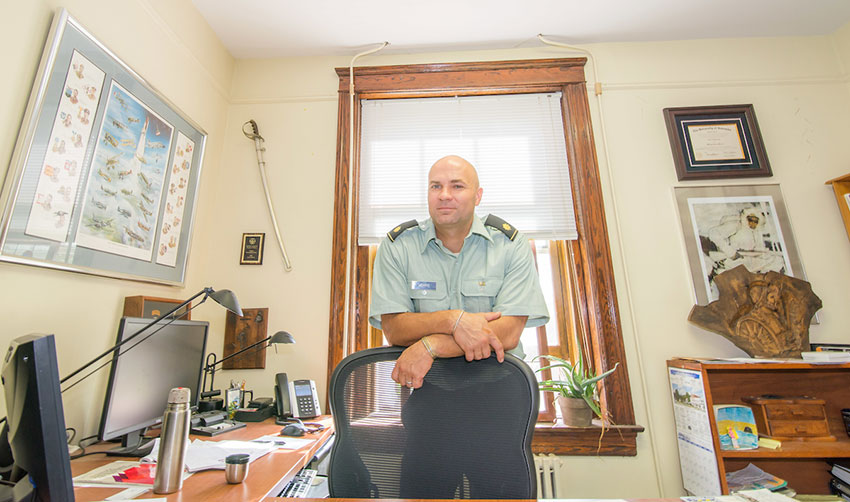 It’s been a busy year for Norwich Assistant Professor of Criminology and Criminal Justice Travis Morris. Recently named the director of the university’s Peace and War Center, Morris organized a NATO-sponsored advanced training course on counter terrorism in Macedonia for South Eastern Europe this past spring. He's also brought a Canadian Fulbright scholar to campus and co-led a summer trip to Israel and Palestine. The trip enabled students from Norwich and the Royal Military College of Canada to explore the roots of the Middle East conflict. All that while teaching and continuing his wide-ranging scholarship, which explores how ideas have shaped modern terrorism. His book, Dark Ideas: How Violent Jihadi and Neo-Nazi Ideologues Have Shaped Modern Terrorism is slated for publication later this year. Morris shares the backstory of nine objects from his office in Ainsworth Hall.

Great Moments in Aviation History Print
A gift from Morris’s father, a retired Air Force colonel, who taught at the Air Command Staff College at Maxwell AFB. “As a kid, I wanted to be a pilot and fly A-10s. But I didn't have 20/20 vision, so I had to let that dream go.” Morris says the poster is a nod to his father and “reminds me a little bit of growing up surrounded by aviators.”

Kentucky Colonel Certificate
When Morris was a police officer in Kentucky, his in-laws nominated him as a colonel in Kentucky’s honorary state militia. He received the certificate among his wedding gifts.

Mountain Bike
As a PhD student and father in Nebraska, Morris cycled to work to squeeze in a workout. “The problem was the wind.” Today, Morris still bikes to the office, albeit less frequently. “I don't have time just to go to the gym. So that's where that fits in.” More often he drives, dropping his kids off at school along the way.

Florida Folksong Book
“My grandfather was a fourth-generation Floridian.” His brother, Alton C. Morris, PhD, was an ethnographer who recorded and preserved folk songs and taught English at the University of Florida. Morris's grandfather constantly sang Florida folksongs to him as a child. The book speaks to the academic side of his family tree.

Miniature of Point Arena, Calif., Lighthouse
A gift from his father recalling Morris’s early childhood. The family lived on a remote USAF radar base in northern California that scanned the West Coast for the Soviet threat. “There were only several hundred people that lived on this remote mountain top. We had a doctor once a week.”

Scrimshaw Whale Tooth
Another memento from that time. Morris remembers it mostly as kid heaven. "It was like living in some outpost away from the rest of civilization—miles and miles and miles and miles of huge redwoods around us, and wild boars, and the long winding access road that made us car sick almost every time."

Carnegie Foundation Mug
Part of the grant writing endeavors Morris has taken on as director of the Peace and War Center.

Haifa Photo
Morris spent two years living in Israel with his wife and young daughter while studying Hebrew and doing research for his master’s thesis on the Israel national police. “Believe it or not, that's looking out our porch. If you turn your head slightly to the right you can see Lebanon.”

Family Photo Taken in Israel
“The girl in the middle is my little daughter, Eden. She was 6 months [old] when we lived there. She happens to be sitting on the Horns of Hattin, which is the site of a historic Crusader battle.” The 12th-century battle marked the turning point of the religious war. There’s no park, just a “small beat up metal sign at the end of a dirt path. You looked down from the battlefield to see the Sea of Galilee.”