With plaque, new museum nods to Norwich as ROTC birthplace 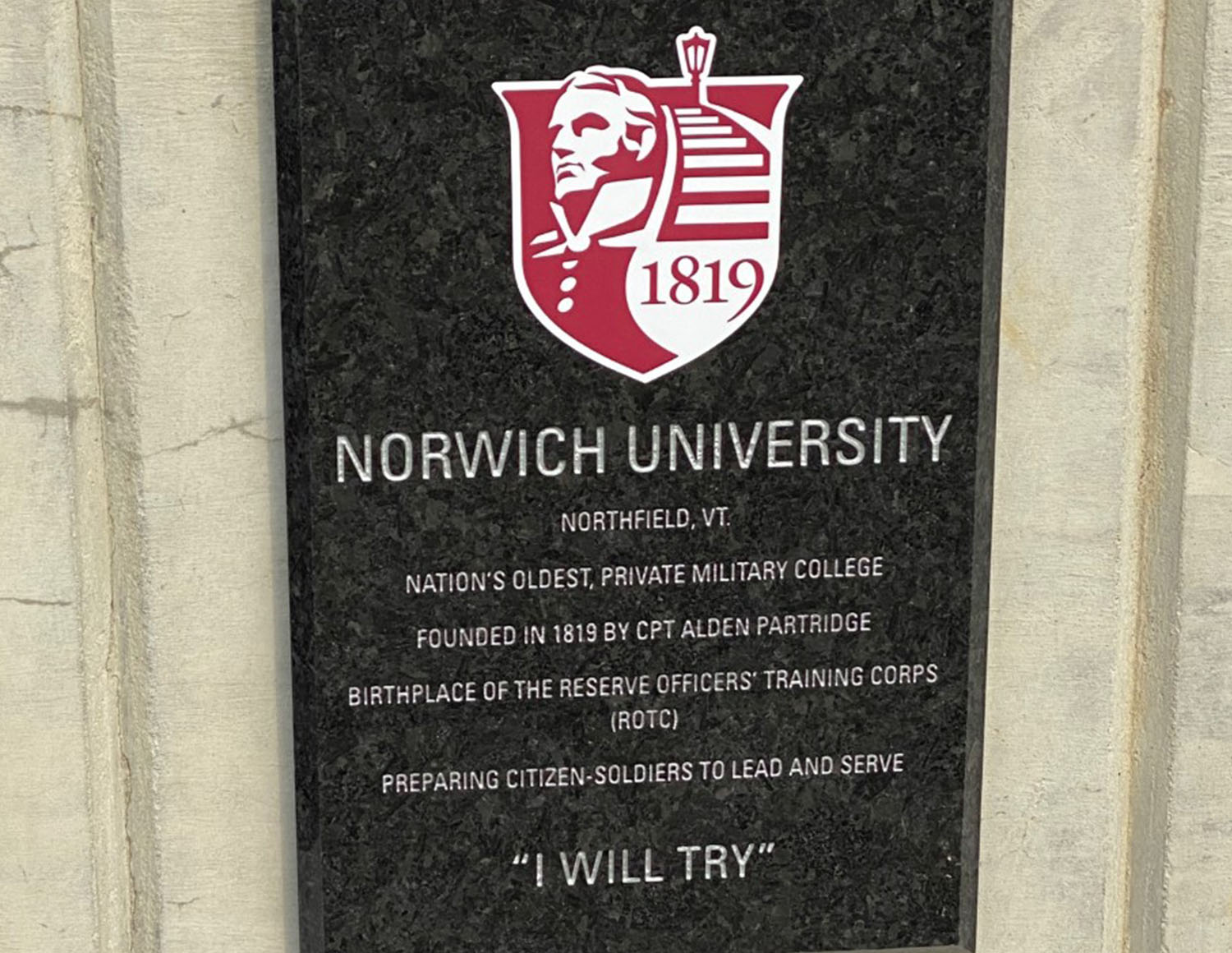 A milestone for the new National Museum of the U.S. Army, a stone-etched nod to Norwich University.

The museum, at Fort Belvoir, Virginia, will reopen from its coronavirus pandemic shutdown on June 14 to celebrate the Army’s 246th birthday. When it does, Norwich alumni and other visitors will see a tribute to the university, installed along the museum walkway.

The black stone plaque features Norwich’s maroon logo, which features the face of university founder Alden Partridge, a U.S. Army captain. In silver letters, the plaque also notes that Norwich is the nation’s oldest military college and the birthplace of the Reserve Officers’ Training Corps. “Preparing citizen-soldiers to lead and serve,” the plaque says above the university’s “I Will Try” motto.

“As the museum tells the history of our American Soldiers and honors their accomplishments and sacrifices, we will also reflect on their more recent service to our nation.”U.S. Army Secretary John Whitley

Roger Schultz, president of the Army Historical Foundation and a retired U.S. Army lieutenant general, worked with Norwich University Executive Vice President David Whaley to create the plaque, which he called a unit tribute to the home of the United States’ original ROTC program.

“You know the story (of Norwich as ROTC birthplace),” Schultz said in an email. “And it is certainly fitting to have Norwich University on display.”

The museum officially opened in November, but was closed because of COVID-19. A  website description says the museum portrays Army history and traditions from soldiers’ perspectives, preserving, interpreting and exhibiting hundreds of artifacts.

“As the museum tells the history of our American Soldiers and honors their accomplishments and sacrifices, we will also reflect on their more recent service to our nation, including their contributions to COVID-19 and disaster-relief efforts, and the protection they provide us all,” U.S. Army Secretary John Whitley said in a statement, adding that June is Army Heritage Month.

In May, Norwich commissioned 98 Class of 2021 students into the U.S. Army; six U.S. Army ROTC cadets ranked among the top 10 of all cadets within Cadet Command; 23 were named Distinguished Military Graduates. (The U.S. Army Cadet Command, formed in April 1986, oversees more than 400 Senior Army ROTC units and more than 800 Junior ROTC programs.)

Click here for details on museum exhibits and admission.