As Anarumo celebrates first full year as president, interviews look forward and back 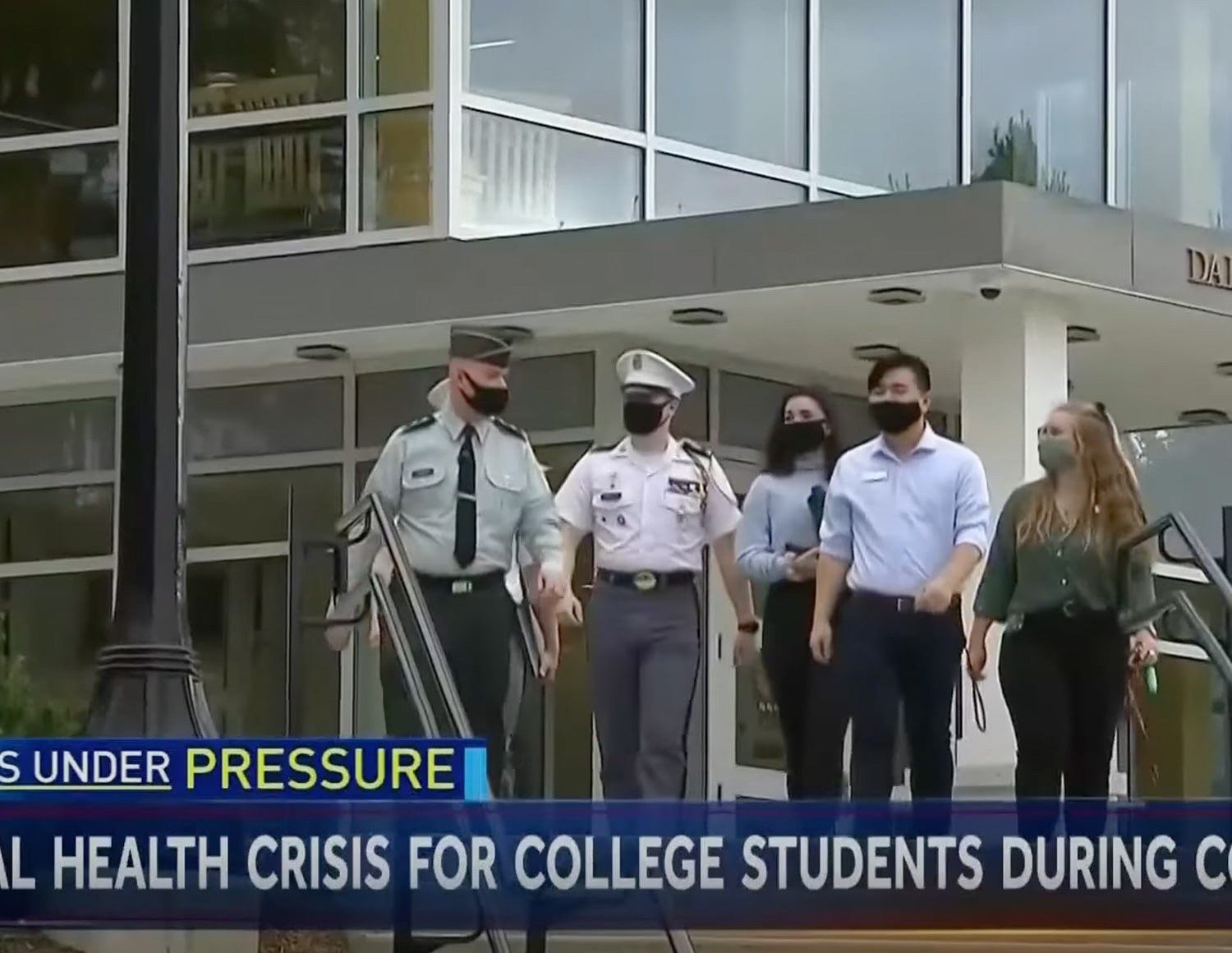 Dr. Mark Anarumo marked his first year as Norwich University’s president Tuesday, capping a tumultuous stint in which he steered students, faculty and staff through the coronavirus pandemic to finish both semesters with neither interruption nor shutdown.

Adhering to Vermont-mandated health and safety protocols helped Norwich mitigate a furious spike in positive COVID-19 cases (dropping it from 89 to zero) and stage in-person Commencement and Commissioning ceremonies when many other schools kept remote.

On April 18, Norwich University President Dr. Mark Anarumo and several students told their pandemic story on the NBC Nightly News. On May 5, Anarumo discussed pandemic tactics with Inside HigherEd; on May 10, he spoke with Comcast Newsmakers on education and leadership.

The media coverage continued April 18, when Anarumo and several students told their pandemic story on the NBC Nightly News with Kate Snow; May 5, when Anarumo discussed pandemic tactics with the academic industry magazine Inside HigherEd and May 10, when Anarumo spoke on education and leadership on Comcast Newsmakers.

The NBC Nightly News story, which came at the 12-minute mark of a 22-minute broadcast, showed Anarumo lugging gear and clothes, including his green Vermont Militia dress uniform, into Dalrymple Hall, where he spent an April week, and walking the building’s corridors with students. Cameras also caught fatigues-clad Corps of Cadets members walking the Upper Parade Ground.

Beck called the president’s barracks stay during the in-room quarantine, which kept students confined to their rooms except to collect meals and visit the restroom, a mission to listen and learn from students.

“It’s very unhealthy and not fair to those young men and women,” Anarumo said.  “They’re here for the social interaction; they’re here for experiential learning.”

Yang, a nursing major who participated in the end-of-semester pinning ceremony that marked the 2021 nursing cohort’s graduation, said he’s felt lonely during the lockdown.

Privett, a political science and history major who in May represented Norwich at the Council on Undergraduate Research’s virtual Posters on the Hill conference, had shared Yang’s despair.

“It’s so difficult,” Privett said. “FaceTime can only do so much.”

Not only did Norwich need to maintain students’ health on campus, Anarumo said, it needed to ensure the health of the Northfield, Vermont, community and its many older residents.

“We’ve done extraordinarily well,” Anarumo told Johnson. “We’re very proud of how the university has performed. Our students have been just remarkable in a very difficult landscape.”

When asked about upcoming goals, Anarumo said he hoped to make an already great university even better, a tall order as higher education is facing a shrinking pool of potential students.

The Washington Post reported in May that the number of 18-year-old prospective college students graduating from high schools has declined by an unprecedented 2.6 million, or 13% in the past decade.

The Post further reported that this college-age demographic is forecast to drop by 11% to 15% more, beginning in the mid-2020s. This drop relates to a U.S. birthrate the Centers for Disease Control and Prevention said dropped 4% in 2020, the sharpest decline in nearly 50 years. (The Associated Press said about 3.6 million babies were born in the U.S. in 2020, down from about 3.75 million in 2019. In 2007, when births were booming, the AP said, the U.S. recorded 4.3 million births.)

Anarumo said he hoped to revive initiatives and modernizations the pandemic sidelined.

“I think we have turned the corner,” he said, “and I look forward to getting to the next phase of the university.”

As he did with Johnson, Anarumo, who retired from the U.S. Air Force on Aug. 1, 2020, described his Norwich presidential arrival with Inside HigherEd’s Emma Whitford. He said succeeding Schneider had been daunting.

“With that level of longevity and adoration — very well-deserved adoration — it was difficult to follow that,” he said in the article, which included five first-year college presidents’ reflections on academic year 2020-21.

“I would have adhered to the most pessimistic models more aggressively,” Anarumo said of the pandemic. “I don’t think anyone expected it to be as challenging as it would be.”