To benefit veterans, pour a cup of GI joe 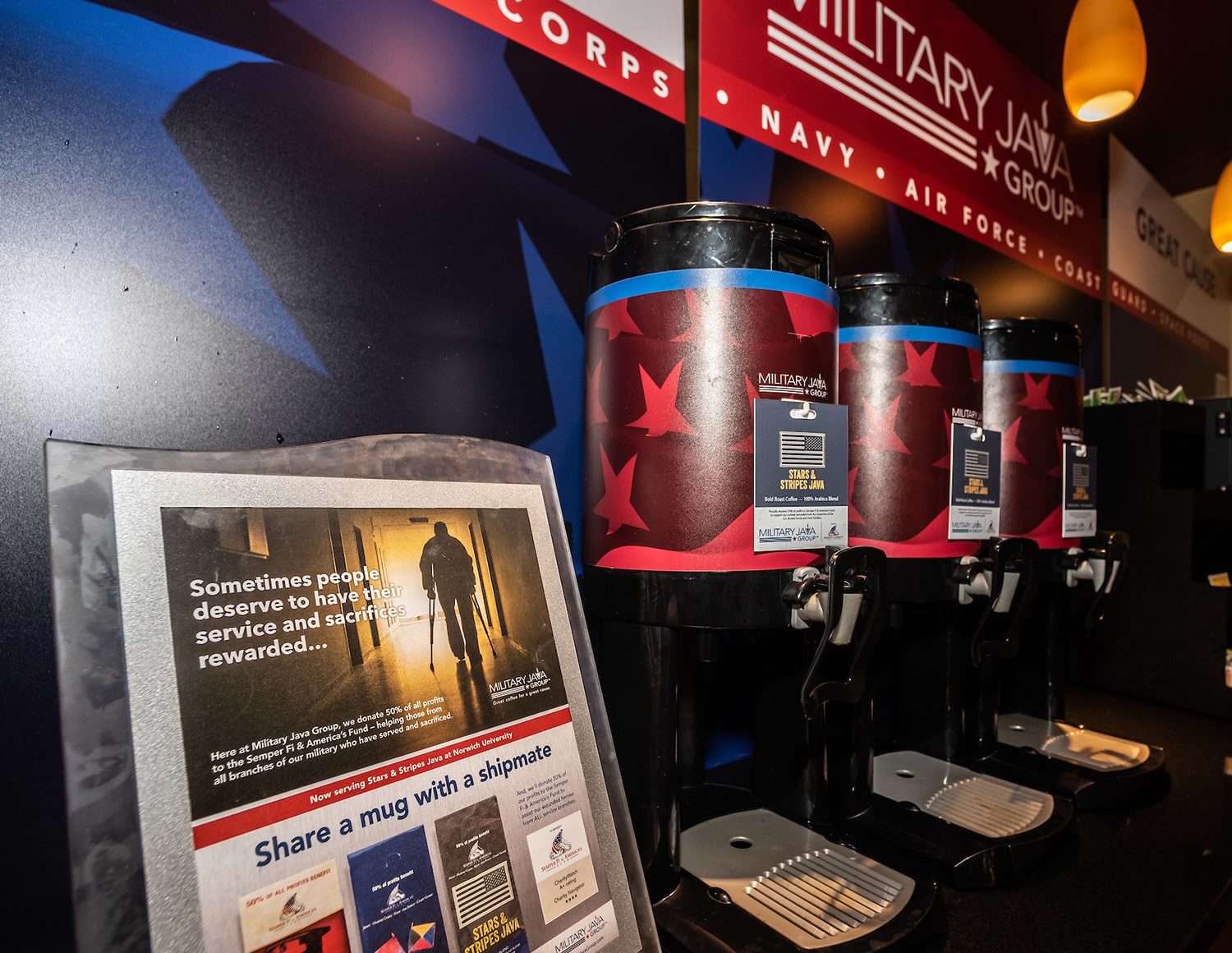 In the fall, when you go for coffee at Wise Campus Center’s dining hall, know you’re helping veterans while you lift your mug and clear your mental fog.

This semester, Norwich adopted Hendersonville, North Carolina-based Military Java Group as its coffee supplier for the Wise Campus Center dining and on-campus catered events. Military Java Group donates half of its profits to the Semper Fi & America’s Fund, a nonprofit group based at Camp Pendleton in Califronia that provides resources and support to combat-wounded, critically ill and catastrophically injured U.S. armed forces members and their families.

“This is a perfect pairing. Norwich University historically has provided our armed forces with many great military leaders and still today graduates special men and women who want to serve our country.”Matt Phillips, chief executive officer, Military Java Group

“We discussed if there was a way that this could be a cost-neutral and a tasty option for our students, that it (would be) a win-win for Norwich University and for Sodexo,” Heidenreich said.

“This is a perfect pairing,” he wrote in an email. “Norwich University historically has provided our armed forces with many great military leaders and still today graduates special men and women who want to serve our country.”

One uncle, Pierce, received a Silver Star with the U.S. Army’s 77th Division in the Meuse-Argonne offensive in 1918, Phillips said. One uncle, Dink, served in both world wars, enlisted in the U.S. Navy after the Japanese bombed Pearl Harbor in 1941. Phillips said Dink participated in four Pacific campaigns and had a son who also served in the Navy, as a submarine torpedoman. Both Dink and his son were involved in the U.S. invasion of Okinawa, Japan, in 1945.

Phillips lost an eye to injury early in life, which kept him from serving in the armed forces. But he deployed to Iraq to support Operation Iraqi Freedom through the U.S. Army’s Logistics Civil Augmentation Program. He said he hopes his donations from Norwich and elsewhere will especially help veterans through the coronavirus pandemic.

“The pandemic has created additional stress for the VA hospitals and their ability to meet the needs of our veterans who need support,” Phillips said. “(But) people are still drinking their coffee.”

Coffee and the armed forces have links stretching back to World War I. In 2016, Smithsonian National Museum of American History curator Jon Grinspan told NPR that journals from the national war archives show the word “coffee” was mentioned more than “war,” “bullet,” “cannon,” “slavery” or “Lincoln.” Grinspan added that Union soldiers, who received 36 pounds of coffee a year from the government, blockaded Southern ports and cut off the South’s access to coffee, leaving Confederate soldiers far less caffeinated.

In the same report, NPR said Union Gen. Benjamin Butler ordered coffee be carried in canteens and planned attacks for when his troops would be most wired. He reportedly  told other generals, “If your men get their coffee early in the morning, you can hold.”

Birth of a company

As Military Java Group’s website reports, Phillips debuted in the coffee business in 1979 as a runner with New York City’s Green Coffee Association. He has lived in Brazil, working as a trading manager for  New York-based green bean exporter Tristao Trading. From 1989 to 2005, he was president and CEO of Branco Peres, a Long Island, New York, coffee exporter.

Besides being served on Norwich’s campus, Phillips’ brands are sold on his company’s website, in the Midshipmans Store at the U.S. Naval Academy in Annapolis, Maryland. The store’s web version in a recent week was selling Jarhead Java Keurig cups and bagged beans.

Phillips said he hopes to eventually partner with other military colleges through the food service companies serving them. He added that Jarhead Java has been sold at 80 U.S. Marine Corps exchanges for five years and his Stars & Stripes Java is approved for sale at U.S. Army and U.S. Air Force exchanges and commissaries.

He said COVID-19 hampered his company’s revenue generation and stalled sales agreemenet. So out of good faith, he gave $30,000 of my own money to the Semper Fi Fund.

Though Military Java Group’s adoption meant the end of a partnership with Vermont-based Green Mountain Coffee, Heidenreich said her company remains committed to the state through its Vermont First Initiative, under which it devoted at least 10% of its food budget to buying Vermont products. Also, she said, Sodexo is working to land a contract with Hardwick, Vermont-based Kingdom Creamery for dairy products and buys its greens from Barre, Vermont-based Ceres Greens, which 2017 Norwich graduate Jacob Isham operates.

In a 2019 statement, Sodexo said it spent $2.8 million on Vermont products in 2018 and held stakeholder meetings and focus groups to address farming challenges.