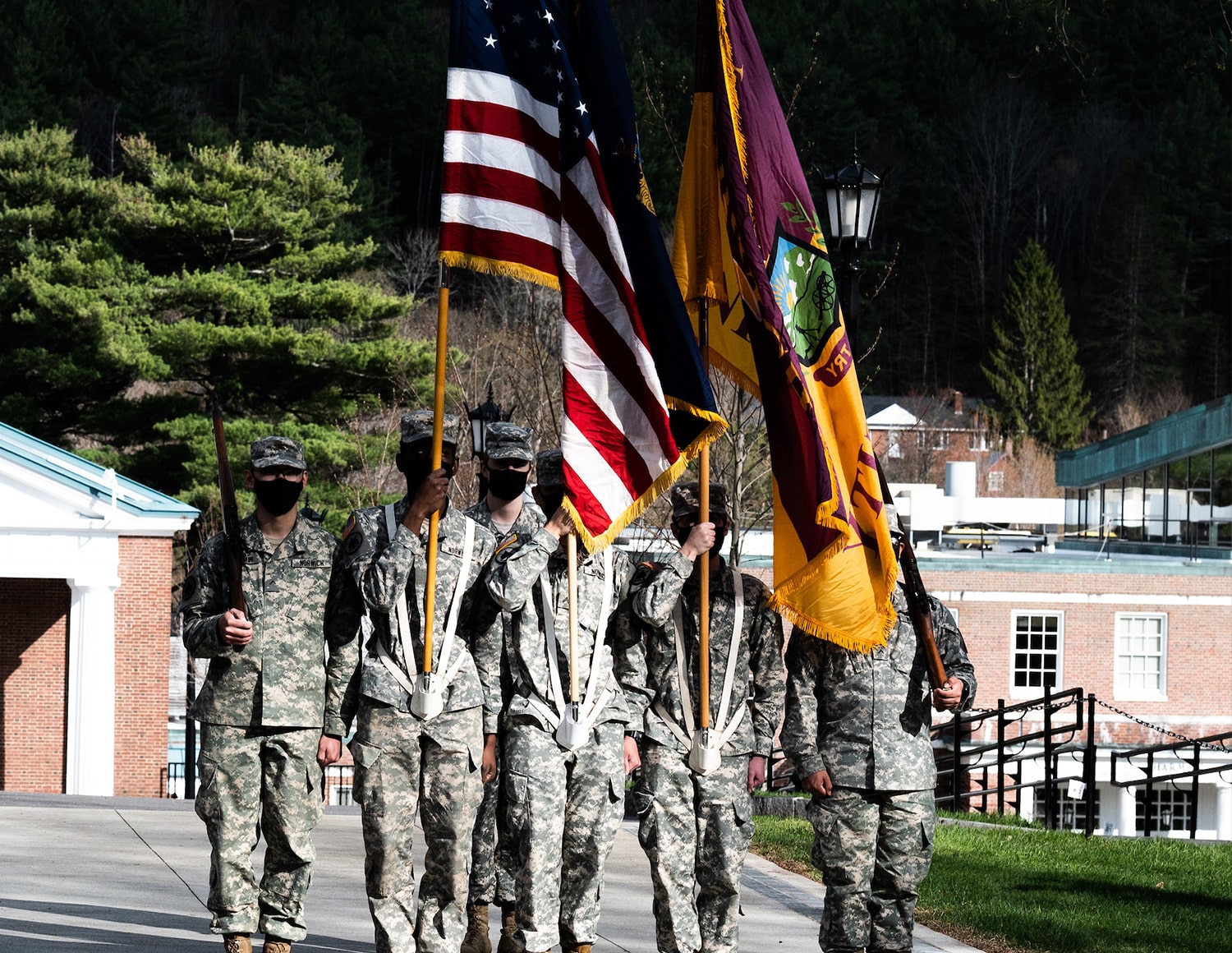 Corps of Cadets changes regimental commanders after review and retreat

On April 23, the fatigues-clad Corps gathered on the Upper Parade Ground for a review and retreat, complete with Regimental Band accompaniment, to usher out Caleb Miller, who’d been regimental commander through the COVID-19 pandemic’s worst, and usher in Matthew Cutting, who will take over in the fall.

“My biggest sense of accomplishment is today. I get to formally, in person, pass off my mantle of leadership to someone else.”Caleb Miller, 2020-21 regimental commander, Norwich University Corps of Cadets

Cutting, a rising senior and criminal justice major from Niskayuna, New York, near Albany, is contracted into the U.S. Army. On campus, Cutting has served as 1st sergeant for the Corps of Cadets’ Cadet Training Company 1. He was also on the Junior Ring Committee and in the Mountain and Cold Weather Company.

In a video posted April 27, Cutting said he’s seen leadership successes and stumbles in the Corps and will use what he’s learned.

“At Norwich, you’re thrown into many different positions of leadership and of servantship and you get to see what works well and what doesn’t work well,” Cutting said. “I think the biggest lesson I’ve learned is to be yourself and not try to emulate something, and somebody, that you aren’t.”

In person, in the moment

Miller, a fellow criminal justice major, said he was glad to cede Corps leadership in person.

“My biggest sense of accomplishment is today. I get to formally, in person, pass off my mantle of leadership to someone else,” Miller said in the video. “That we are still here today is a testament to Norwich University and the leadership we have at this school as well as the leadership that we teach.”

Miller, who began the academic year welcoming Class of 2024 rooks and encouraging them not to fear failure and carry on, told his Corps colleagues adversity had strengthened them.

“Hard times make strong people, and strong people create good times,” Miller said. “Let those words sit heavy on your mind as I don’t say (them) lightly. We all have a duty as Norwich men and women to go out into the world and leave it better than we found it.”

Like Miller, Cutting acknowledged the pandemic’s trials and said the Corps has overcome them. Cutting thanked his predecessor for leading, mentoring and groundwork laying.

“The Hill will not be the same without you,” Cutting said to Miller, “but I promise that your impact will be felt for years to come.”

A week after the Corps command change, Miller, who’s from Phoenix, stood under a tent on Wise Campus Center’s green and took a giant step toward following his own better-the-world advice. After taking his commissioning oath from U.S. Air Force Col. Scott Minton, Miller invited his parents, Paula Miller and Chris Miller to pin the new 2nd lieutenant’s insignia on his U.S. Marine Corps uniform.