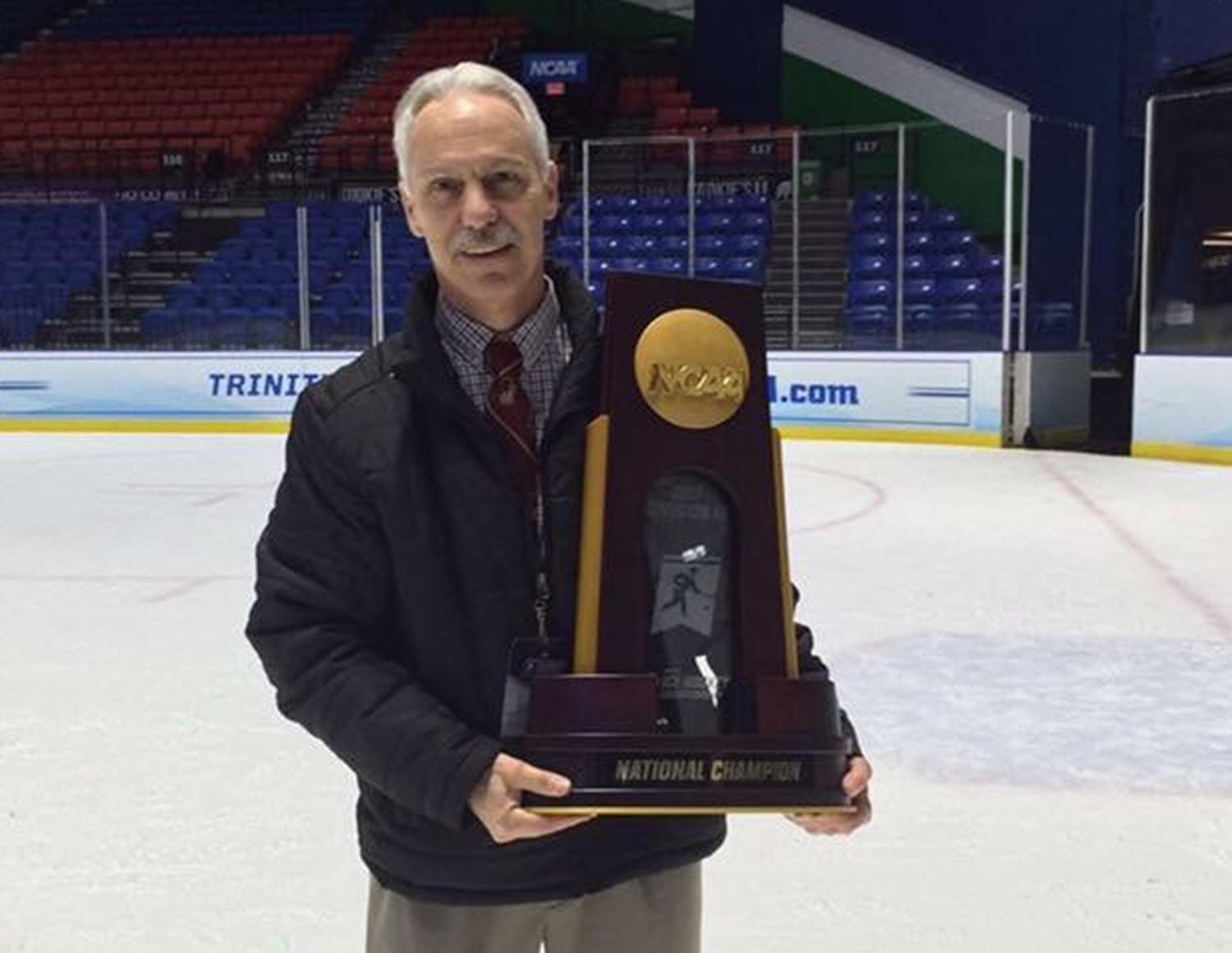 Longtime Norwich University Athletics Director Tony Mariano announced Monday that he will retire in Spring 2022. He will leave after 44 years at Norwich and three decades as Athletics Department leader.

“For over 40 years, Tony Mariano has bled Maroon and Gold, and has provided remarkable leadership in our athletic department,” Norwich University President Dr. Mark Anarumo said. “Tony has been a mentor for our coaches and staff, while creating a family atmosphere that has led to a culture of academic and athletic excellence in our athletic programs. Tony’s passion and unwavering loyalty to our university's mission have been admired by thousands of student-athletes, their families, fans and the entire Norwich community.

“He built a championship culture amongst our athletic department, while always prioritizing the installation of integrity and character in our athletes and university. I wish Tony and his wife, Gail all the best in their well-deserved retirement. There will always be a spot on every Norwich sideline for them to return and cheer on our teams as they’ve loved doing over the last 40-plus years.”

“Tony has been a mentor for our coaches and staff, while creating a family atmosphere that has led to a culture of academic and athletic excellence in our athletic programs.”Norwich University President Dr. Mark Anarumo

Mariano helped Norwich University’s athletic programs achieve unprecedented success. In his 30 years as athletic director, which started in 1992, the Cadets won 12 national championships. The first national title, which was the first in school history, came in 2000, when the men’s hockey team beat St. Thomas (Minn.) 2-1 in Superior, Wisconsin.

“Having the opportunity to work alongside Tony Mariano for the last decade has made a profound impact on my career and the type of administrator I am,” New England Hockey Conference Commissioner Katie Boldvich said. “As a young commissioner, Tony took me under his wing and helped cultivate my leadership style and administrative presence. For those teachings and support, I am forever grateful.

“Further, Tony’s impact on the hockey community, specifically within Division III in the East is immeasurable,” Boldvich added. “Through his leadership, the New England Hockey Conference (NEHC) has grown into one of the nation’s premier playing conferences in the country. His leadership on the Executive Committee has helped bring better administrative structure and strategic growth to the league. We’re thankful for his leadership and his presence will be greatly missed. We love you Coach!”

The Cadets have won 75 conference championships during Mariano’s athletic director tenure and have had 16 student-athletes earn College Sports Information Directors of America Academic All-American honors for athletic and academic excellence.

Mariano has served in numerous leadership roles within the Great Northeast Athletic Conference (GNAC) since Norwich joined the league in 1997. He has served on the Executive Committee, as GNAC treasurer and chair of Athletic Directors Council and men’s tennis.

“For the better part of two decades Tony has brought his sage wisdom to the GNAC,” said GNAC Commissioner Joe Walsh. “Tony is a consummate professional who has displayed leadership, compassion for fellow GNAC members, and has always embraced the GNAC mission of providing our student-athletes a high-quality experience and the best opportunity for student-athlete success.

“He is well respected by his peers in the GNAC, Division III and within the NCAA,” Walsh added. “Personally, I will miss working with Tony on a day-to-day basis, I greatly value the past 20 years of working beside Tony and I wish him and Gail the best as they enter the next part of their life.”

Mariano has helped overhaul Norwich's athletic facilities, overseeing the construction of Kreitzberg Arena and Doyle Hall and renovations to the Andrews Hall locker room and Sabine Field’s conversion into a multipurpose turf facility as part of Haynes Family Stadium.

In March 2018, Mariano was named an Under Armour® Athletic Director of the Year by the National Association of Collegiate Directors of Athletics.

Reflecting on his nearly half-century of service on the Hill, Mariano said, “Norwich gave me the wonderful opportunity to coach the two sports that I loved and to become an administrator at the collegiate level," he said. "I've had terrific mentors in Bob Priestley, Joe Sabol and Wally Baines during my early days at Norwich and have been blessed to work with many outstanding coaches and staff.

“My greatest thrill has been the ability to watch and get to know the hundreds of outstanding student-athletes that have participated in our programs and have enabled Norwich athletics to attain high levels of success,” Mariano added. “I marvel at what these athletes have done both academically and athletically and how they have gone on to pursue careers in the military and civilian life.”

Mariano arrived in Northfield in 1974 and earned his master’s degree in education the following year, during the early stages of the university's graduate school program. While pursuing his degree, Mariano served as an assistant coach with the men’s soccer and hockey teams in 1974-75.

In 1978, Tony returned to Norwich as the head men’s soccer coach. He was newly wed to his wife, Gail, who quickly became Norwich’s “superfan,” attending as many Norwich home games as possible to cheer on the Cadets.

“I am grateful to the Northfield community for opening up their arms and welcoming Gail and me when we first arrived in 1978,” Mariano said. “We have made great friends and those relationships will last a lifetime.

“The thrill of winning our first national championship will forever be etched in my memory and what that has meant for not only our athletic department but for the entire university,” Mariano added. “Watching our teams win conference championships and seeing the excitement in our athletes and coaches has always been a special part of being an administrator as well.”

In May 2021, the athletic department renamed the Male and Female Most Outstanding Senior Athlete awards to the Coach Mariano Award.

Mariano, a Rome, New York, native, was inducted into the Rome Sports Hall of Fame in 2001. He was a two-sport athlete at St. Lawrence University, playing hockey and soccer.

Playing hockey, he scored 19 goals and added 35 assists for 54 points in 80 games and was assistant team captain during his senior year.

He graduated from St, Lawrence University in 1974 with a bachelor’s degree in physical education.

Tony and Gail reside in Northfield just a heartbeat from the Norwich campus where both will remain welcomed fans. They have one son, Tommy, who is married to Missy Mariano, and have two grandchildren, Maggie and Tucker. Tommy serves as a leadership gifts officer at Colgate University; Missy is head field hockey coach at Hamilton College.

“Norwich has been my home and to see how much it has grown has been a wonder,” Mariano said. “I will miss the people and the day-to-day interactions I have had, but I will always bleed Maroon and Gold.”