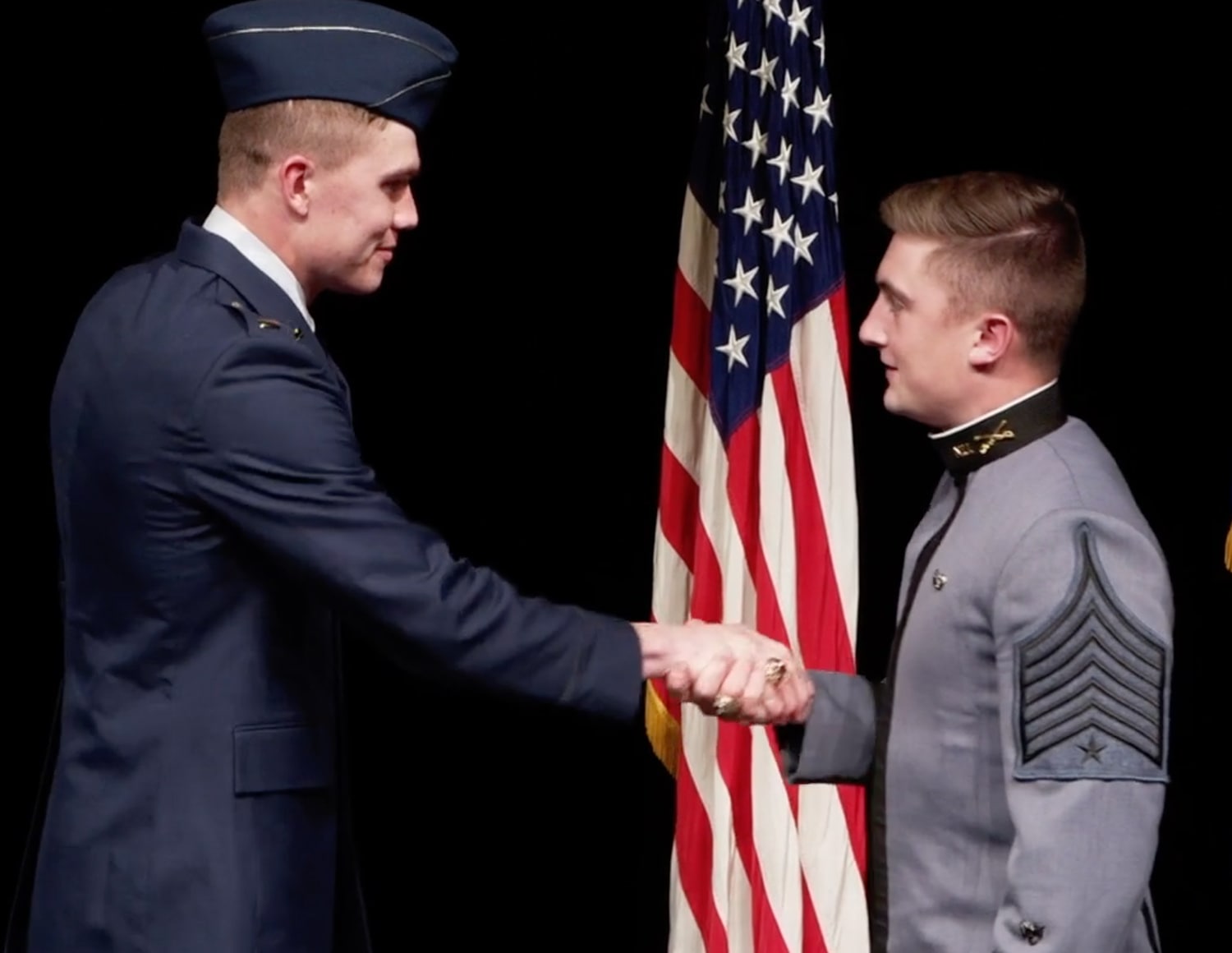 Norwich’s U.S. Air Force ROTC detachment, No. 867, made history on May 1, when it commissioned its largest group since 1972 — 40 cadets. And Col. Matthew Smith, the detachment’s commander, was proud and pleased.

“We usually don’t commission this many people,” Smith said May 1 in Mack Hall. “That means one of two things — they’re really, really good, or your cadre is really, really good. … I would argue it’s the cadets … the new lieutenants were tremendous.”

Smith told the soon-to-commission Class of 2021 that the moment was theirs and was a year in the making. Everyone from President Dr. Mark Anarumo to the Facilities Operations team to several cadets, had worked to make the moment special, he said.

Smith shared three favorite quotes his son, Peyton, who died in October at age 18 from an aggressive form of pediatric bone cancer, had called his favorites.

— “Don’t tell me the sky’s the limit when there are footprints on the moon.” — country musician Paul Brandt.

— “If you have the opportunity to play this game of life, you need to appreciate every moment. A lot of people don’t appreciate the moment until it’s passed.” — rapper Kanye West.

“The airmen, you’re going to supervise, the guardian (Space Force personnel) you’re going to supervise in the future have no idea who you are,” Smith said, “But here’s the deal. At the end of that assignment, at the end of your Air Force career, at the end of your Space Force career, you want to be unforgettable in the most positive manner possible. You want to drop that mic, hang up that uniform and say, ‘You know what? I left it all out there on the field.’”

Olsen on Sept. 10 transitioned from the U.S. Air Force to the U.S. Space Force. Anarumo, who retired from the Air Force in August as a colonel, administered Olsen’s oath. Olsen was the first Air Force officer in Vermont to transfer into the Space Force.

Smith sent the graduates off with gifts. To the four new lieutenants who were Distinguished Graduates, having finished in the top 10% of their graduating class, he gave copies of “The Bomber Mafia,” New Yorker magazine writer Malcolm Gladwell’s newly released book.

To all the commissionees, he gave items with the detachment’s special Yeti logo, patches, stickers and challenge coins, to replace the ones probably given away to the people delivering first salutes. Smith told the new officers to keep the coins with them, in a pocket in their fatigues, flight suit or dress uniform. By tradition, people caught without the coins buy drinks for people who challenge them to produce the coins.

Smith also gave away pens engraved with each new officer’s name. The names were in gold, like the 2nd lieutenant’s bars the commissionees had pinned on. The space next to the names were left blank, Smith said, so the pens’ holders could imagine filling in aspired-to ranks.