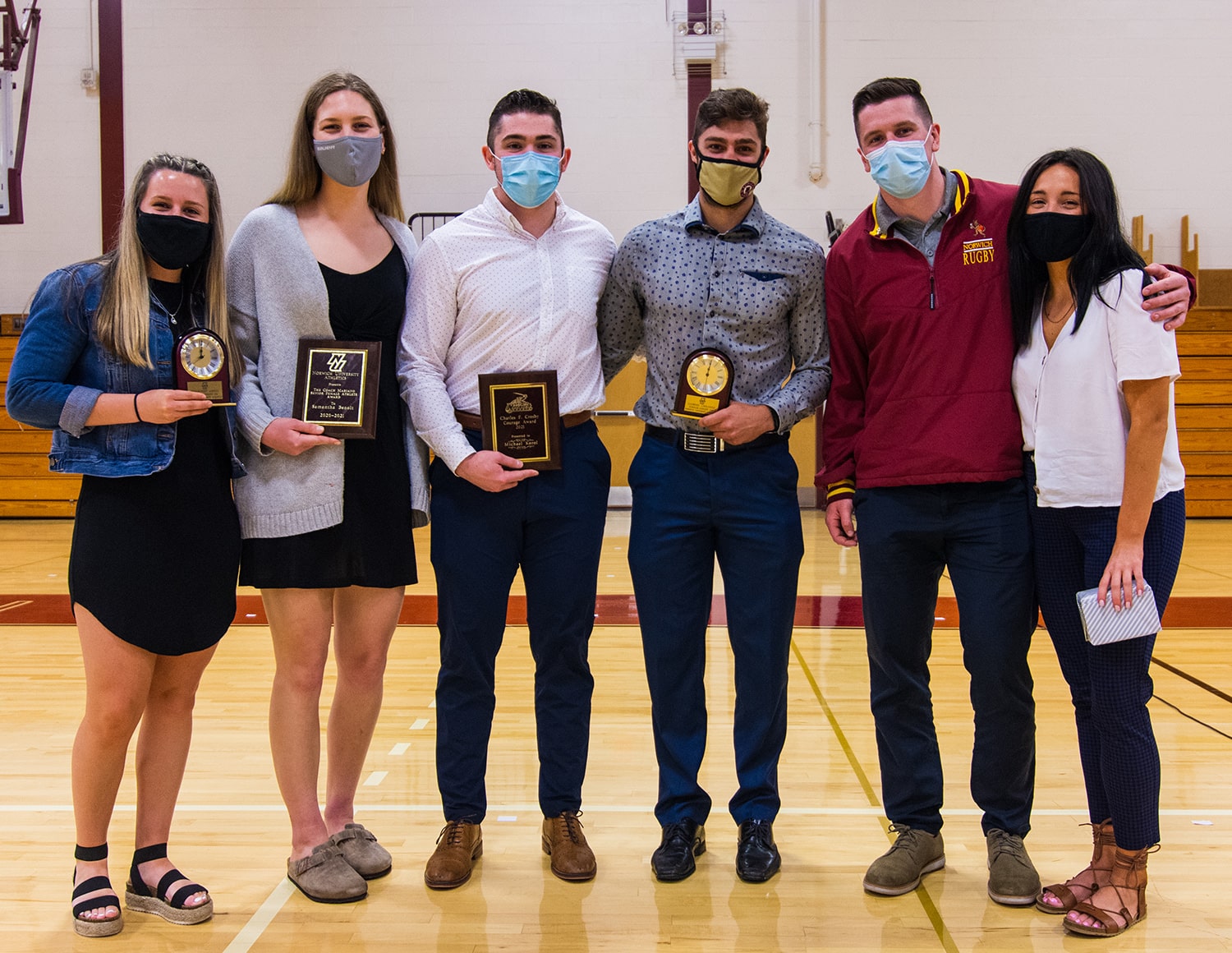 President Dr. Mark Anarumo and Athletic Director Anthony Mariano hailed student-athletes and distributed awards at the April 29 picnic, which replaced a traditional awards dinner and had been scheduled for Sabine Field until rainy weather intervened.

Anarumo said he understood the hurt of having an athletics season scrubbed by the pandemic, partly because he saw his son Mark Jr. lose his senior season of Division III ice hockey at the Air Force Academy in Colorado Springs, Colorado. Anarumo said his son’s team lost a chance to contend for a national title and his son lost a chance to visit Europe with the armed forces all-stars.

“You helped your team culture be the gold standard (for conduct) on this campus. I’m very grateful.”Norwich University President Dr. Mark Anarumo

Anarumo thanked the student-athletes for taking care of one another and helping the university succeed amid the pandemic.

“You helped your team culture be the gold standard (for conduct) on this campus,” he said. “I’m very grateful.”

Brassard and Benoit became the first student-athletes to receive the newly renamed Coach Mariano Award, given annually to the best male and female athletic career achievements as determined by a vote of Norwich coaches and staff. Men’s and women’s ice hockey players  — Tom Aubrun and Amanda Conway, both Class of 2020 — also swept the 2020 Norwich male and female most outstanding senior athlete awards.

“This is a great honor,” Mariano said of having his name on the award. “My time here at Norwich has been very special. The student-athletes that we’ve had here, the coaching staff … the training staff, the equipment room, without them, we wouldn’t have had the success that we’ve had over the years. It’s just been a great honor to be at the institution for this long.”

Shining on the ice

Benoit, of Bow, New Hampshire, became just the second defenseman and the 12th player overall to reach 100 career points. She helped lead Norwich to the 2018 NCAA Division III National Championship as a freshman and is a two-time AHCA first-team All-American (2019 and 2020). She was twice named New England Hockey Writers All-New England and NEHC first-team All-Conference.

She was also named the 2019 NEHC Tournament Most Valuable Player after assisting on four goals in a 6-0 championship game win over Castleton University.

Benoit, who scored 16 career Norwich goals, was on pace to break Norwich’s women’s hockey assists record when the pandemic shortened her senior season. She finished her career with 84 assists, third in program history, just seven short of now-head-coach Sophie Leclerc’s record of 91 assists. (Leclerc graduated from Norwich in 2010.)

Brassard, of St. Jean-sur-Richelieu, Quebec, was a 2020 American Hockey Coaches Association third-team All-American after complementing a team-high 18 goals with 13 assists for 31 points in 28 games.

Brassard earned All-New England honors in his junior season, helping Norwich to a 24-2-2 record and the No. 1 national Division III ranking in the pandemic-shortened 2019-20 season. He finished his Norwich career with 38 goals and 42 assists for 80 points in 94 games.

Rambin, this season’s men’s rugby captain, won the Garrity Award, given to the senior who has distinguished himself or herself athletically and academically and has displayed leadership in Norwich’s Corps of Cadets. The award is named for Joe Garrity ’27 who served as athletic director, baseball coach and graduate manager of athletics.

Rambin, an exercise science major, with a 3.65 cumulative GPA, commissioned into the U.S. Army and received the Jack Buncey Combat Arms Award for Outstanding Infantry Commissionee.

Bennett, of Hopkinton, New Hampshire, won the Looke Award, which goes to the senior who has distinguished himself or herself athletically and academically and led as a civilian. The award is named for longtime swimming and women’s soccer coach Roy Looke, the father of Steve Looke, a director in Norwich’s Center for Student Success.

Bennett, a four-year women’s basketball starter, was on pace for 1,000 career points when the pandemic shortened her senior season, for which she was team captain.

Bennett, a health science major with a 3.4 cumulative GPA, was a four-year member of the Student-Athlete Advisory Committee. She organized team attendance at the breast cancer awareness walk, volunteered for Special Olympics and served for two years on the university’s HOPE mental health awareness group.

Korol became the fifth recipient of the Charles F. Crosby Courage Award, which honors a graduating senior athlete or team manager who overcame adversity while at Norwich. The award was established in 2017 to honor Charlie Crosby ’63, a longtime Norwich athletics supporter and former sports information department member who battled leukemia for 15 years while working full time at the university.

Korol, of Saskatoon, Saskatchewan, lost his father to cancer in December and was a year removed from being on the Humboldt Broncos, the junior hockey program that lost 16 members in a tragic April 2018 bus accident. Korol was a teammate and close friend of many of the players and people who died.

“Even during the most difficult times, you realize there’s someone there for you or there is someone that is fighting their own battle,” Korol said as he accepted the award. “Therefore, I would like to … say, ‘Thank you,’ to my family, my friends and my teammates. Their love and support over the last four years, especially this year more than ever is something that I’ll be forever grateful for.”