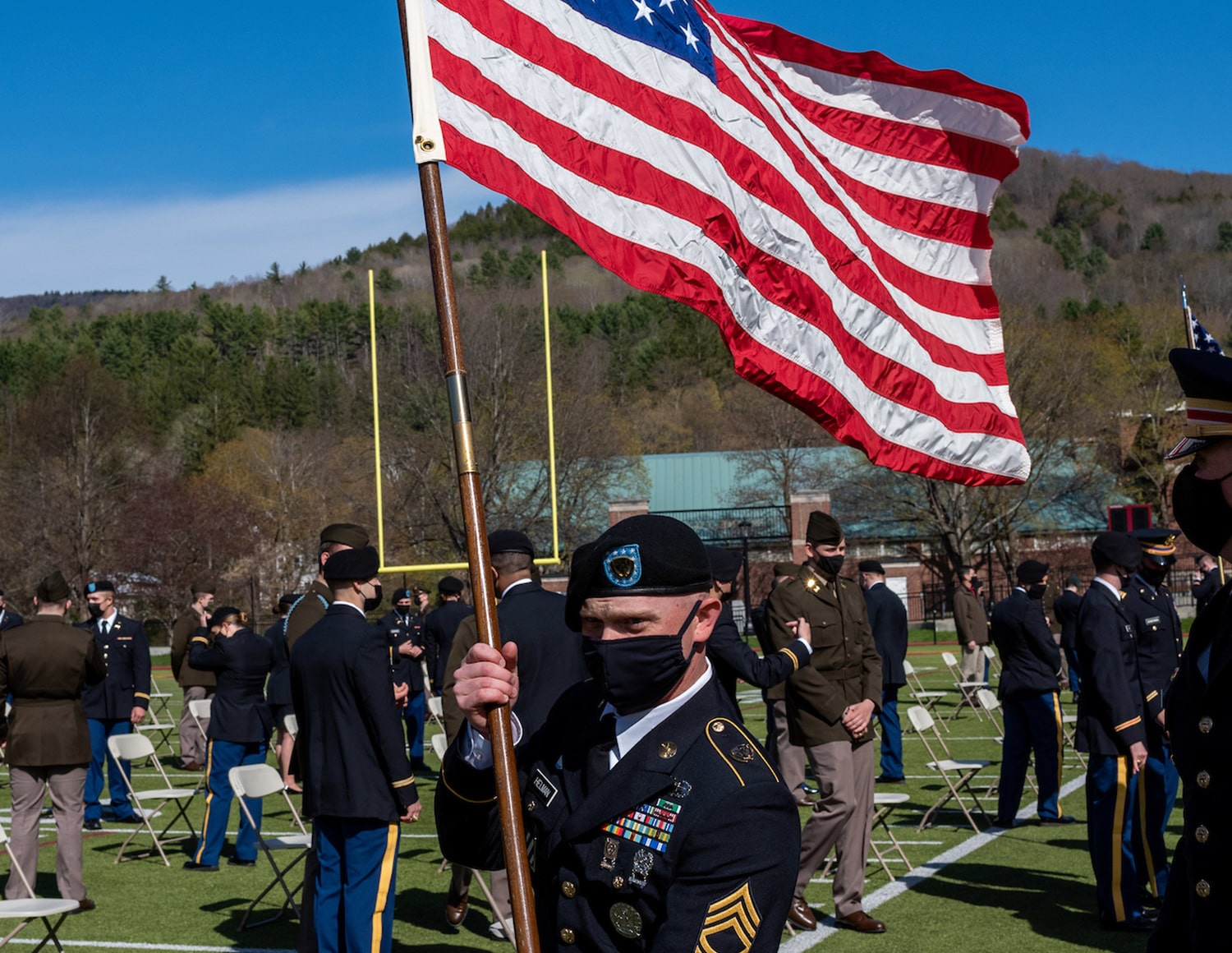 Six Army ROTC cadets, he said, had ranked among the top 10 of all cadets within Cadet Command, 23 were named Distinguished Military Graduates and 90% earned their first rank choices, topping the Armywide average of 68%, and 96% got one of their top three branch choices. (The U.S. Army Cadet Command, formed in April 1986, oversees more than 400 Senior Army ROTC units and more than 800 Junior ROTC programs.)

“The collective success of this program is tied directly to all of the individual accomplishments of all of you seated here, and I congratulate you on a job well done.” Col. Joel Newsom, U.S. Army ROTC commander, Norwich University

Overall, eight schools among the 274 senior Army Reserve Officers’ Training Corps units nationwide earn MacArthur Awards. On its website, the Army said the MacArthur Awards, announced April 15 and presented since 1989 by the Cadet Command and the nonprofit Gen. Douglas MacArthur Foundation, recognize the ideals of “duty, honor and country” that MacArthur (1880-1964), advocated as Army chief of staff in the 1930s and in his Pacific theater service during World War II.

“The ROTC motto is ‘leadership excellence,’ and these programs exemplify that ethos through their hard work and dedication,” Maj. Gen. John Evans, commander of U.S. Army Cadet Command, said. “Being named a MacArthur award winner acknowledges that these programs are going above and beyond to train the next generation of Army officers. They are the best in the nation.”

“The collective success of this program is tied directly to all of the individual accomplishments of all of you seated here,” he said, “and I congratulate you on a job well done.”

“You will commit to well and faithfully discharging your duties, meaning that you must give your best every day to accomplish the mission your commanders assign you, and, just as importantly, to serve the soldiers under your command.”

Good Army leaders, Newsom said, create climates of dignity and respect. They ensure soldiers can pursue education; are paid and can live in safe, suitable homes; and can experience life moments such as weddings, births and funerals.

“Among this group of future officers, there very well may be a future chief of staff of the Army or someone who is given the opportunity to lead in a battle that makes the history books,” Newsom said. “However, for most of us, I believe that our legacies in the Army will be directly tied to the soldiers and families we impact through good, positive leadership.”