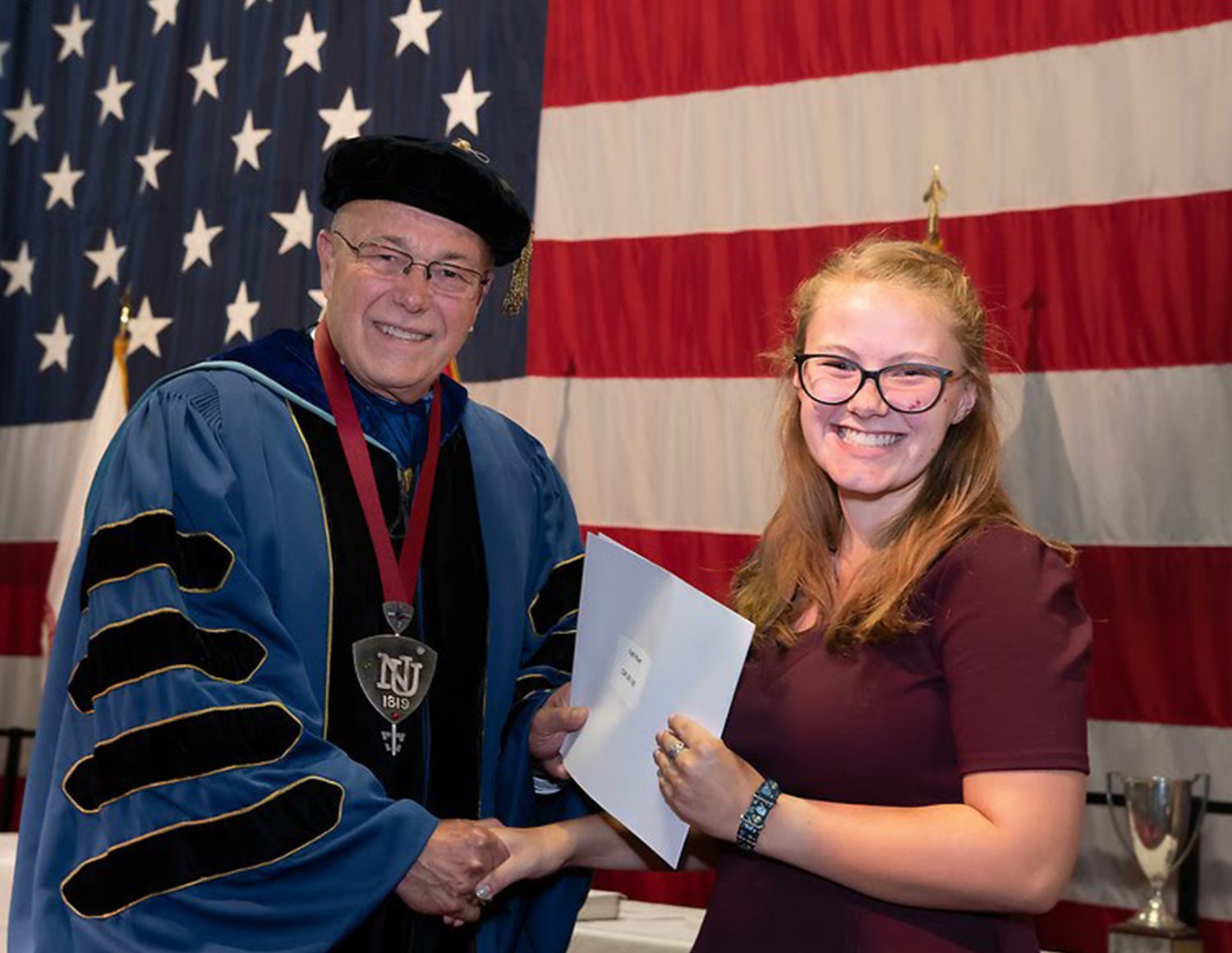 As a byproduct of her experience at Posters on the Hill, last week’s national research conference for college undergraduates, Norwich University junior Faith Privett met virtually with two aides from the offices of U.S. legislators representing Vermont, Rep. Peter Welch, a Democrat, and Sen. Bernie Sanders, an independent.

Privett, a Class of 2022 political science and history major from Proctor, Minnesota, was the only Vermont college student among the 60 students who presented at Posters on the Hill, an annual event presented April 27 and April 28 by the Gaithersburg, Maryland-based Council on Undergraduate Research.

“It was an honor to not only speak with them but also to represent Norwich and the state of Vermont in the process.” Faith Privett ’22

Privett was the sixth Norwich student in the past seven years to attend Posters on the Hill, which ran virtually but would have taken place in Washington, D.C., if not for the coronavirus pandemic.

Her research project was “Clad in Sheep’s Clothing: An Analysis of the Influence of Attitudinal and Extralegal Factors on Justice Antonin Scalia’s Decision-Making Process.” It tested votes by Scalia, who spent 27 years on the Supreme Court and died in 2016, on First Amendment, civil rights, labor unions, and privacy cases against his Segal-Cover score, an independent measure of ideology, the Stimson Mood Index, a measure of overall public mood in the United States, and custom public mood indexes.

“It was pretty quick, because they were working on appropriations this week,” she wrote in an email Thursday.

On April 29, Privett met with representatives from Sanders’ office, which had already sent an emissary to the virtual meet-the-researchers meeting during which Privett presented her findings. Privett had presented to a small group that also included her mother; Norwich University Associate Professor of Political Science Dr. Jason F. Jagemann and fellow student researcher Arish Vale of Iowa’s Grinnell College, and Katarina Lisaius, a representative from Sanders’ office in Burlington, Vermont.

On April 28, Privett met with Lisaius and Quinn Bornstein from Sanders’ office.

“Because (Lisaius was) at the poster presentation (Wednesday), they already got the gist of my research,” Privett wrote. “I was able to speak with them about advocacy a little bit. They stated that they and Senator Sanders support undergrad research as an important part of education.”

Privett said she was glad for the meetings.

“It was an honor to not only speak with them but also to represent Norwich and the state of Vermont in the process,” she wrote.