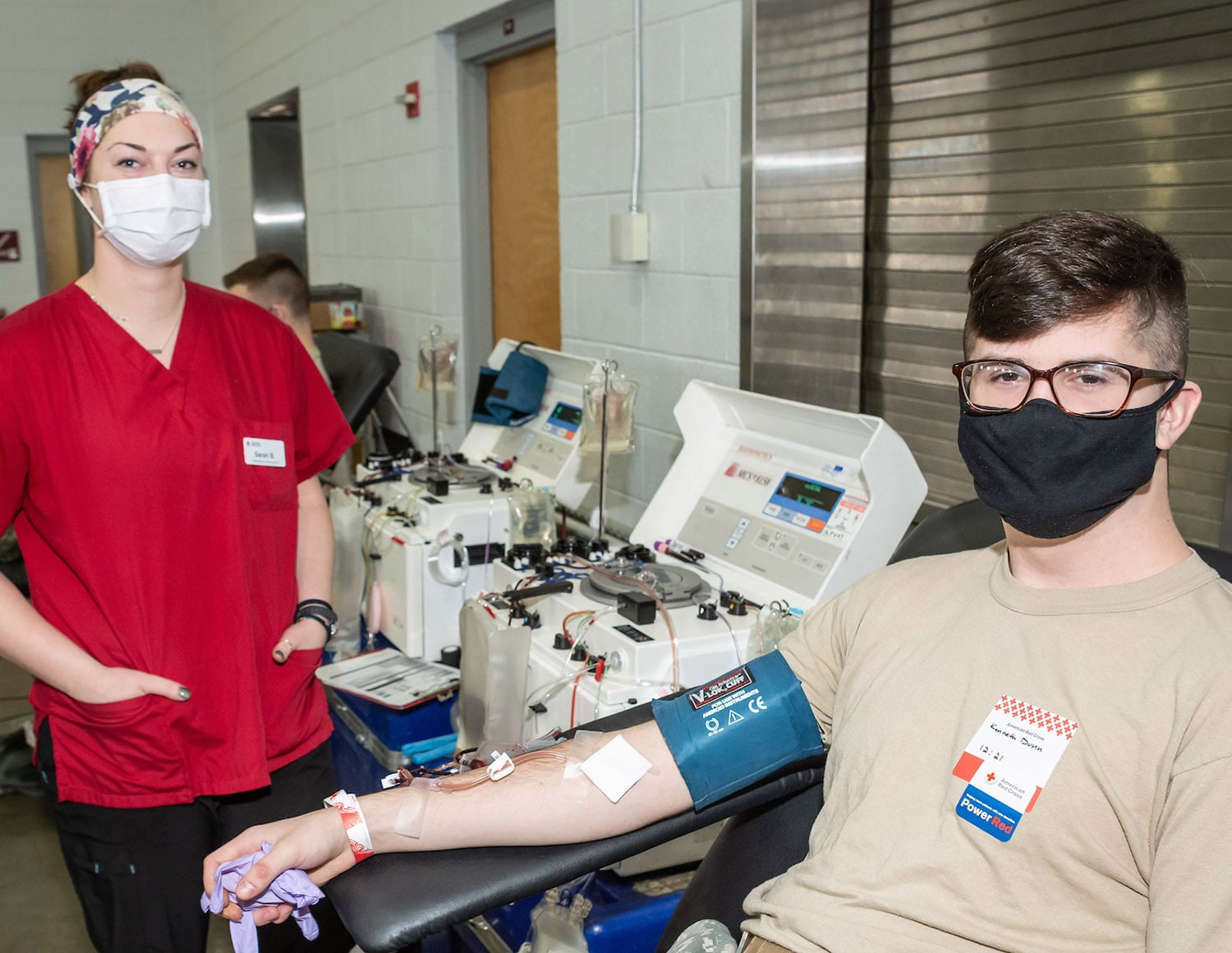 Spring 2020’s sudden campus shutdown to flatten the coronavirus infection curve scrubbed the Service, Learning and Leadership Recognition Celebration, a traditional in-person fete-and-feast. DiDomenico said she had neither time to plan nor enough digital experience to mount a virtual event.

But this year, DiDomenico and Assistant Director Abigail Joyal ’18, were ready. They honored 2021’s Civic Scholars — students who received scholarship aid for 500 hours of service over four years — and three students for honors earned in 2020.

“Now, more than ever, having this civically engaged volunteer soul and just being a good citizen is so important to preserving our civilization.”Angela (Roberts) Dolber ’95

Angela (Roberts) Dolber ’95, from the first class of Norwich’s five-year architecture program, delivered the keynote address. At Norwich, Dolber, a civilian student, served as a four-year resident adviser, was an American Institute of Architects class officer, worked with the Student Activities Office, participated in NU Visions Abroad and ran cross-country.

After college, Dolber kept volunteering, organizing service trips with Trinity College in Hartford, Connecticut. She also toured 21 nations and performed 1,000 service hours with Up with People, a Denver-based nonprofit focused on intercultural communication.

After displaying a quote from South African anti-apartheid revolutionary Nelson Mandela, “What counts in life is not the mere fact that we have lived. It is what difference we have made in the lives of others that will determine the significance of the life we lead,” Dolber hailed volunteering’s merits. She said Norwich and Up with People service taught her to respect all races, religions, politics, people of different economic status and their cultures.

Dolber, who lives in Whitinsville, Massachusetts, and works as a real estate agent, shared cultural anthropologist Margaret Mead’s assertion that all social change comes from the passion of individuals. Dolber then challenged listeners to go into the world and serve all the people as they can.

“Now, more than ever, having this civically engaged volunteer soul and just being a good citizen is so important to preserving our civilization, no matter who we are or where we come from,” Dolber said. “We just need to realize that we are simply human beings who deserve … to be loved and cared for to survive to keep our civilization moving forward and serving the ‘we’ and not the ‘me.’”

Norwich’s 2020 winners of the Leaders in Service Award from the Association of the U.S. Army consistently put “we” before “me.” The association is a nonprofit educational and professional development association serving the U.S. Army. Winners were Brandon Milburn ’20 (athletic service liaison), and two soon-to-graduate 2021 classmates, Victor Hinojosa (Norwich University Scouting Association president) and Destanie Decius (Buddy Up mentor).

Milburn, of Bridgewater, New Jersey, majored in criminal justice before graduating and commissioning as a New Jersey National Guard 2nd lieutenant. On the men’s lacrosse team, Milburn played goalkeeper and helped organize the annual Climb for Connor, a fundraiser in honor of Connor Roberts, a men’s lacrosse player who died in 2015 from a sudden, hypertrophic cardiomyopathy-triggered heart attack. Besides serving in the National Guard, Milburn is pursuing a master’s in criminology at Rutgers University.

Hinojosa, of Bristol, Vermont, majored in political science and minored in leadership studies. He volunteered with the scouting association in all four of his Norwich years and now works as a Berlin, Vermont, police officer. On Easter, Hinojosa, showing empathy, delivered Easter baskets to five young children in a Northfield, Vermont home. An elderly woman had died there that day during an Easter celebration.

Decius, of Fort Lauderdale, Florida, will graduate from Norwich this summer. She participated in the NU Visions Abroad program, visiting Tanzania in 2019 to volunteer, and now teaches English Language Arts in Barre, Vermont.

Because of the pandemic, there are no 2021 awards, and so no one will receive these awards this year, DiDomenico said.

Hinojosa said he was surprised and honored to receive the 2020 Leaders in Service award, which, as his webcam showed, he’d hung on a wall behind him. He recalled Camporees he’d organized and virtual merit badge sessions he’d led for Boy Scouts from Vermont and across America.

“(This award) meant a lot to me,” said Hinojosa, who will soon commission as a military police officer. “It’s a very humbling thing.”

The four-year Civic Scholars Program launched in 2017 and is modeled after AmeriCorps, a national volunteer program. Civic Scholars can receive a $3,000 annual scholarship for each year they complete program requirements; completing all four years means a $12,000 scholarship.

Sophia Raskosky, a Civic Scholar and freshman architecture major from Managua, Nicaragua, described volunteering at the COVID-19 testing site, which operated since the fall in Plumley Armory, and serving in the Adopt a Grandparent Program, which matched her with Harry Gross, a senior citizen and armed forces veteran from Williamstown, Vermont.

Raskosky said she shared stories and discussed current events with Gross every Monday.

“This whole experience is not only amazing because I’m able to be of company to Harry every week, but (because) also I get to learn a lot about the world through his experiences,” she said. “Helping out at the COVID testing site has become something (Civic Scholar volunteers) have come to look forward to every single week, because … we get to hang out with each other while also giving back to our community.”

“Norwich is service … (and) has stepped up in so many ways,” said DiDomenico, who ran the Plumley Armory COVID-19 testing site and tapped many students to help. “More than 80 percent of our students volunteer on a regular basis. It’s what makes Norwich stand out.”