In a site for testing soils, a legacy takes root 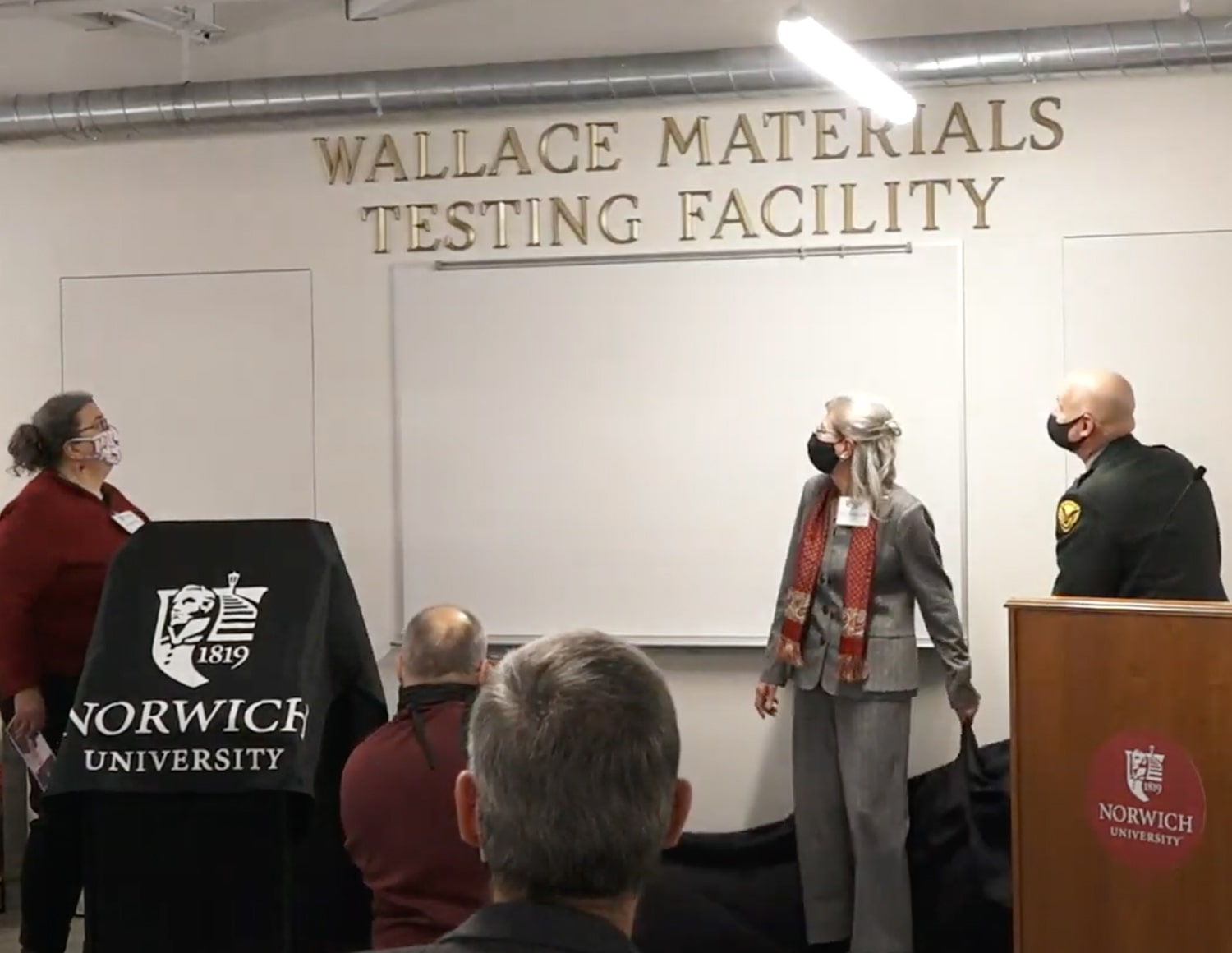 Don Wallace’s reputation preceded him, and succeeded him. The mechanical engineering professor spent 55 years teaching at Norwich University, long enough to coach students who’d meet, wed and send more students his way (their children), sometimes twice over. All who entered Wallace’s classroom abandoned hope of an easy ride; he was exacting.

But as President Dr. Mark Anarumo and Wallace’s colleagues related last month, Wallace was tough out of love and wisdom. He knew the world was taxing and wanted his students, whether they became engineers or not, to handle it and thrive. When he died in November 2018, Wallace left not only a crowd of grateful graduates, but a legacy. He donated $3 million to the university’s David Crawford School of Engineering for lab upgrades and other needs.

“It just gives me tremendous pleasure to see Dad’s gift and Dad’s love of Norwich being celebrated and being acknowledged by so many people. I’m really proud of him, and I’m really proud of all of you.”Beth Wallace, daughter of longtime Norwich professor Donald M. Wallace

The ceremony was livestreamed for the wider Norwich audience, including Wallace’s other daughter, Meg.

When Wallace bequeathed his gift, now-President Emeritus Richard W. Schneider told trustees Norwich would create an endowment to fund the Donald Wallace Visiting Professor Chair in Engineering, the lab upgrades and a scholarship fund for deserving juniors and seniors.

“Don’s impact on his colleagues and students during his career was profound and he had already left an impact on the university when he retired,” Schneider said in 2019. “What we did not know was that Don would have the final say in this story.”

On April 1, Anarumo, who succeeded Schneider in June 2020, said Wallace’s expectations were high and his conviction impenetrable. The students had great responsibility; they’d build things, like airplanes and bridges, that people trusted with their lives. Overall, Wallace figured, mechanical engineers’ work figured somewhere between invention and installation of all sorts of technology­ — from doorknobs and zip-top bags to robots — that made life work.

“This transformational gift ensured that the quality of instruction, the professors and the engineering program would remain strong long after he was gone,” Anarumo said. “The Wallace Materials Testing Facility will enrich experiential learning programs and create an environment that will continue to attract excellent engineering students and continue to provide them with the best education we can give them.”

Fitzhugh, who retired from Norwich in May 2020, said Wallace was loved by some people, feared by others but respected by everyone.

Hard on the outside, tender on the inside

“Don was a Tootsie Pop,” said Fitzhugh, a Wallace hire and, for 15 years, his colleague. “Don (was) hard on the outside … he was tough to his students because he knew if he was tough to his students in class, then, when they graduate they would be tough. They would be able to survive in industry or the military or wherever they wound up after college.

“But inside, Don (was) soft,” Fitzhugh added. “Once you got through that tough exterior, he (was) a puppy dog. And he had this love for his students and their success.”

Senior Looknauth Mahadeo, a construction management major and Corps of Cadets member, joined Sevi, a 1995 Norwich graduate, in showing some of the new equipment Wallace’s gift had brought, including a soil-strength testing machine.

Then, Bellinzier and Beth Wallace unveiled a plaque in Don Wallace’s honor, that described the professor’s signature pipe, mustache and eyeglasses, strong opinions and participation in faculty committees and leadership. The plaque also described Wallace’s love for gardening and hiking. (In 1980, the plaque read, Wallace became the fourth person to climb the highest points of all 50 U.S. states.)

The plaque also described Wallace’s service to Northfield, the town where the university stands, both with stints on the Selectboard and as an emergency medical technician. Beth Wallace said her father would be proud to see the lab improvements, equipment and plaque, although his face might not reveal it. More than anything, she said, her father cared about Norwich and making things better for students.

“This university was a big part of our family … this is where we grew up,” she said, remembering running around Tompkins Hall and climbing on the engineering school’s outdoor insignia. “It just gives me tremendous pleasure to see Dad’s gift and Dad’s love of Norwich being celebrated and being acknowledged by so many people. I’m really proud of him, and I’m really proud of all of you. I feel like you carry that spirit on.”