For bestselling historical author, past is dialogue 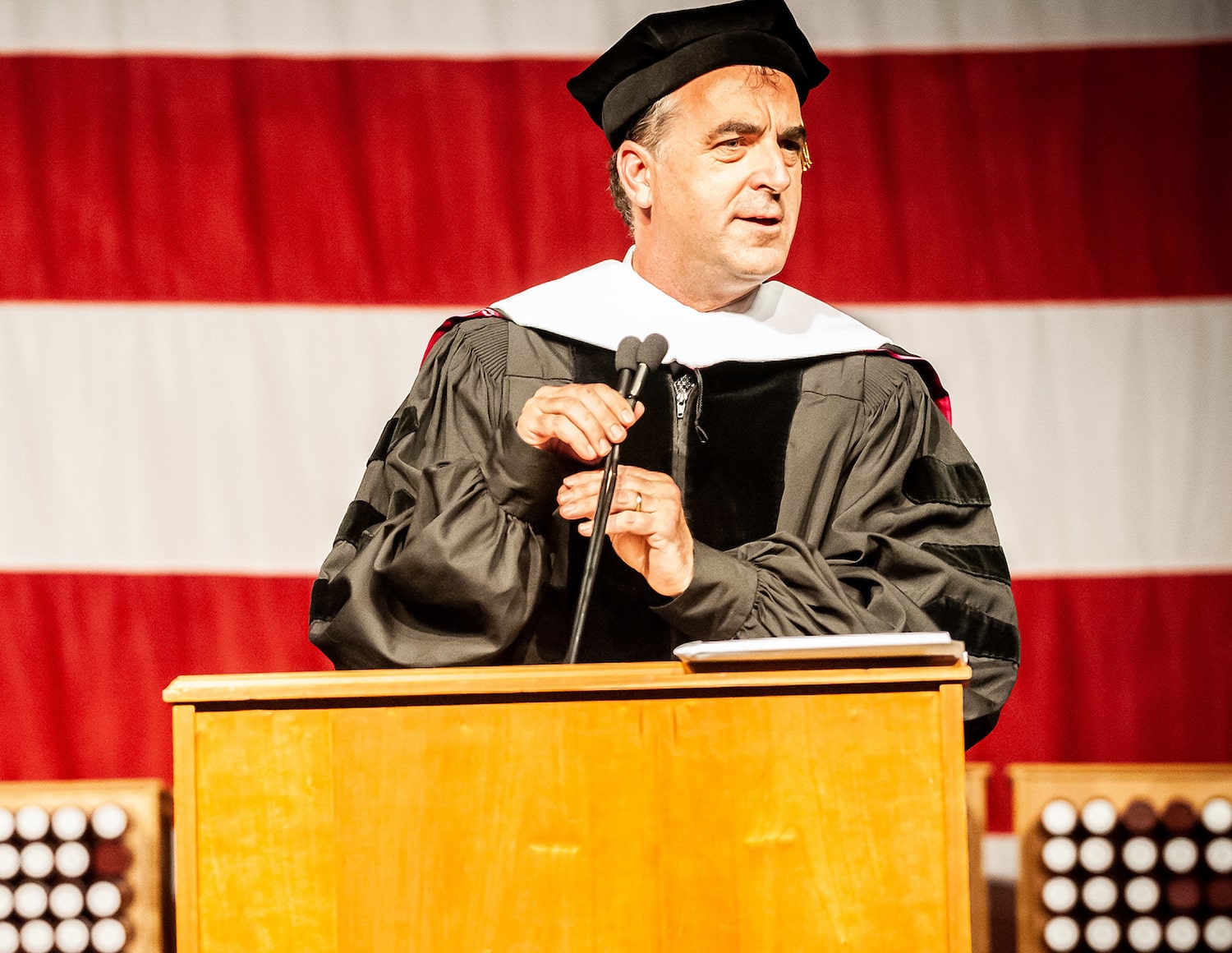 Hungry for a history snack? Alex Kershaw can satisfy. His Twitter feed, a tasting menu of this-day-in-history moments, hints at the gourmet spreads in his many bestselling books, which chronicle military history, specifically World War II. Two years ago, he wrote a book on Norwich University’s two-century history.

As much as he likes sharing history, Kershaw, a journalist, historian and author of 10 books, likes finding great new military books and writers. He hopes to keep doing so as Selection Committee chairman for the university’s signature William E. Colby Award. Kershaw took the post in February, succeeding Carlo D’Este ’58, who died in November.

On WDEV radio in February, historian Alex Kershaw argued that no other American institution can match Norwich for putting valiant warriors into key Civil War battles.

The Colby Award, in its 22nd year, is presented annually to a first solo work of fiction or nonfiction that has made a major contribution to the understanding of military history, intelligence operations or international affairs. It was named for the late ambassador and former CIA director William E. Colby.

Shortly after taking the Colby Awards post, Kershaw, whose books include “The Liberator” (2002), “The Longest Winter” (2007), “The Bedford Boys” (2008) and, most recently, “The First Wave” (2019), went on Waterbury, Vermont, radio station WDEV’s “Vermont Viewpoint” show to discuss his work and the Norwich post.

Kershaw told “Vermont Viewpoint” host Rick Cengeri that Norwich is unique for instilling a sense of service into students both military-focused and civilian.

“That’s a kind of really cool thing,” he said, “because we need to make sure that … the part of American society that serves in the military isn’t detached from the rest of society.”

Kershaw, a 54-year-old York, England, native, who graduated from University College, Oxford, and is a Friends of the National World War II Memorial board director, said Norwich provided countless armed forces warriors through its founding of ROTC and argued that no other American institution can match Norwich for putting valiant warriors into key Civil War battles.

For example, he said, Edmund Rice, who attended Norwich from 1856 to 1858 and earned his degree in 1874, defeated the last Confederate soldiers during Pickett’s Charge in July 1863 in Gettysburg, Pennsylvania, helping the Union secure victory and forever altering American history. (Rice would earn the Medal of Honor for his valor in the battle.)

Kershaw told Cengeri that his military history interest grew out of his journalism experience, which included writing for The Guardian, The Independent and The Sunday Times in Britain. The stories he heard from World War II veterans enthralled him.

The books chosen for Colby Awards have highlighted important historical moments, he said, citing 2011, Karl Marlantes’ “Matterhorn,” which chronicles day-to-day combat in the Vietnam War, James Bradley’s “Flags of Our Fathers,” which tells the story of the six U.S. Marines who raised the U.S. flag over Iwo Jima, Japan, in 1945 and Adam Higginbotham’s “Midnight in Chernobyl,” which examines the 1986 nuclear disaster in the then-Soviet Union, as good examples.

The Colby Award, Kershaw said, will bring him back to the Military Writers’ Symposium and Vermont, where he lived for most of two decades, and lets him mentor and vitally boost emerging authors of well-written, well-researched books. Such books, he said, deserve a shot at a wide audience.

In a February interview with norwich.edu, Kershaw expressed similar sentiment, saying the Colby Award highlighted important talent and important stories. He said he, like D’Este before him, wants to encourage young history writers to persevere.

“In a cluttered media landscape where people have low attention spans, it’s hard to get people’s attention, and really promote books properly,” he said. “The Colby Award serves a very important function from the point of view of publishers and authors everywhere. If you receive the Colby, that’s a really good start to your career.”

Besides promoting new writers, Kershaw said, promoting the Colby Award paid tribute to D’Este, whose own books were accessible and engaging.

“I’m thinking about the reader first,” Kershaw said. “I want … when people see that a book has received the Colby Award to say, ‘I’ve got to read that. That’s a book I’ve got to buy.’”

In a video announcing the book, Bicentennial Commemoration Committee Chairman Doug McCracken ’70 said he and university officials invited Kershaw to tour the Sullivan Museum and History Center and knew almost immediately that they wanted Kershaw to author the book.

“Alex is a very engaging and passionate person,” McCracken said. “He’s a great historian and the prospect of writing Norwich’s history was something he focused on and got excited about right away.”

Kershaw said he hopes to continue exciting people about history, wherever they are, however he can, even tweet by tweet.

“Any kind of use of any media, radio, TV. … making a movie, social media, Twitter, you just have to do whatever you can these days to reach an audience,” he said.