‘You exemplified America’s very best in an airman.’ 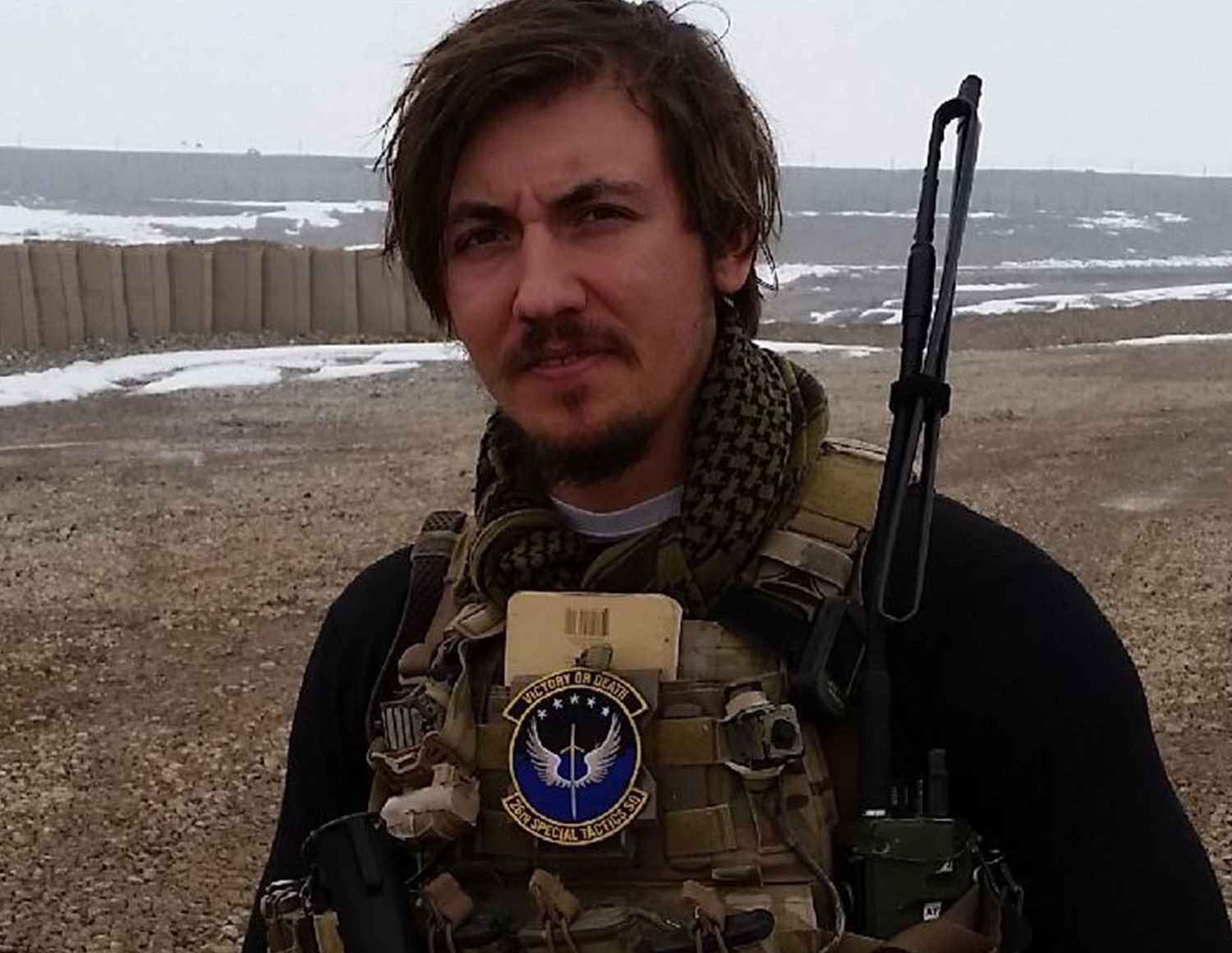 Alaxey Germanovich, a Special Tactics combat controller, joined the U.S. Air Force for its action and challenges — few other jobs would let him see the world, train as he’d trained, do what he’d do. In April 2017, attached to 7th Special Forces Group, he deployed for the first time, heading to Nangarhar Province, Afghanistan, serving as the team’s joint terminal attack controller. He went right into the firing line, facing more than two weeks straight of constant gunfire, bombs and danger.

An Operation Freedom’s Sentinel mission that was supposed to last a week lasted 17 days. Relying on training that allowed him to stay preternaturally calm and live in the moment, Germanovich, then a senior airman, risked his life. When a fierce firefight erupted during a patrol through an enemy-occupied village, he directed airstrikes, crawled through constant gunfire and saved 150 teammates.

For his bravery, Germanovich received the Air Force Cross on Dec. 10 in a physically distanced ceremony at Cannon Air Force Base in Curry County, New Mexico. Air Force Secretary Barbara Barrett attended Germanovich’s award ceremony, which was streamed live on Facebook, and recounted his heroism.

Alaxey Germanovich, who is now a U.S. Air Force staff sergeant and student in Norwich University’s Bachelor of Science in Strategic Studies and Defense Analysis Program, became the 12th Special Tactics airman to receive the award, second in stature only to the Medal of Honor, since the Sept. 11, 2001, terrorist attacks.

Germanovich, who is now an Air Force staff sergeant and student in Norwich University’s Bachelor of Science in Strategic Studies and Defense Analysis Program, became the 12th Special Tactics airman to receive the award, second in stature only to the Medal of Honor, since the Sept. 11, 2001, terrorist attacks.

In a Cannon Air Force Base video posted Dec. 15, Germanovich described the more-than-eight-hour April 8, 2017, firefight for which he received the honor. He directed airstrikes, faced gunfire, shielded a fallen colleague and saved lives.

Every moment of the operation to clear about 450 Islamic State fighters was TIC, or troops in contact, Germanovich said, packed with firefighting and ordnance dropping. As the enemy got pushed closer to the Pakistan border, he said, already robust violence intensified.

On April 8, Germanovich and his teammates had fought for days and hardly slept, save for short catnaps. After clearing a compound with a couple of Green Berets, he said he walked inside and sat down. He next remembered waking with a start to the sound of belt-fed machine-gun fire and finding himself alone.

“I look around and I see that I’m the only American sitting down right now and I don’t know where my friends are at. I just see two of my partner force pulling security out of the compound,” he said. “My friends are getting shot at.”

Germanovich said he put on his helmet, grabbed his rifle and sprinted out of the compound to find his team pinned next to a mountainside by a larger enemy force.

He ran through raking machine-gun fire and dove behind a rock. With another huge enemy force about 100 meters to the south near a tree line and the next proper cover 80 meters away, Germanovich said his team would have to bomb its way clear, dropping ordnance in an open stretch.

“As soon as the aircraft called ‘Weapons Away, 20 seconds,’ I just scream at my team, ‘Start running,’” Germanovich said. “(We) dive for cover, and as the last guy tucks behind the wall, this bomb just airbursts and you see the frag(ments) just … wipe everything.”

The team’s next problem was stopping a dug-in sniper who’d been shooting at the coalition force. Training paid off, he said, when a coalition team sergeant zeroed in on the sound of outgoing gunfire and amid the din of bursts, booms and staccato, discerned where the sniper had hidden. He was nestled narrowly between rocks in an outcrop.

“I’m like, ‘Oh boy,’” Germanovich said. “When you’re in the open and you’re getting shot at it’s a lot different than even having an industrial-size rock to hide behind. Everyone is basically proned out, in the open and (you’re) fighting for your life.”

The AC-130U Spooky’s fuel was running dangerously low; there was just enough to return to base to refuel. But Germanovich, sensing maximum danger, asked the pilot to squeeze out every last ounce of fuel it had left, dropping down to emergency levels.

Germanovich and his teammates had spent their ammunition, and enemy were all over the tree line. Germanovich saw gunfire rounds snap near the sliver of rock he was using for cover. Meanwhile, the gunship was back, dropping ordnance. The bomb blasts grew closer. Ninety meters. Then, 65 meters. Thirty-five meters. Twenty-five.

The team’s helicopters, which had also spent their ammunition, had gone to rearm. But Germanovich knew he needed to get De Alencar to the Medevac landing zone and left cover to run toward him.

“Everyone knew just what to do; there were formats and everybody was following them,” he said. “Me being the weird Air Force guy attached to the Green Beret team, I knew if I’d gotten schwacked that day, I know they would have done everything to leave with me that day. And that means everything to me.”

At the Air Force Cross ceremony, Barrett said Germanovich had been intrepid and relentless, repeatedly casting aside his personal survival instinct to protect his team.

“You exemplified America’s very best in an airman,” she said. “Your Air Force recognizes your gallantry and your nation honors your valor.”

Col. Matt Allen, the 24th Special Operations Wing commander, said airmen like Germanovich keep the promise to their teammates that they’ll never be outmatched in a gunfight. He said a cascade of choices — to join the Air Force during wartime, to pursue entry to the Special Operations Command and to prepare for combat — led to Germanovich’s heroism.

Germanovich said he was no braver than anyone else in the fight. Everyone else in that fight would have done all they could to help one another, he said; everyone was there for the team. De Alencar, whom he called D, had been extremely humble and professional.

He said helping to lead America’s defense and seizing Special Tactics’ one-of-a-kind challenges have made serving continuously interesting. Reaching the Special Tactics team and staying on it have required constant effort and have offered chances to grow and sharpen his skills incrementally.

“Once you … complete your training, and you make it to a team, you like the self-drive, that self-motivation … the desire to continue to get better.”

In his comments to Norwich and in the Cannon Air Force Base video, Germanovich said he most values proficiency, professionalism and humility.

“If you’re too proud to accept an answer or to accept a solution, just because someone’s … not from your enterprise or is a younger dude on (the) team … if you’re just super closed off to those things, then you’ve lost a chance to learn,” he told Norwich’s panel.

“When the time comes, you will do your job,” he said, “and you will do it extremely well.”