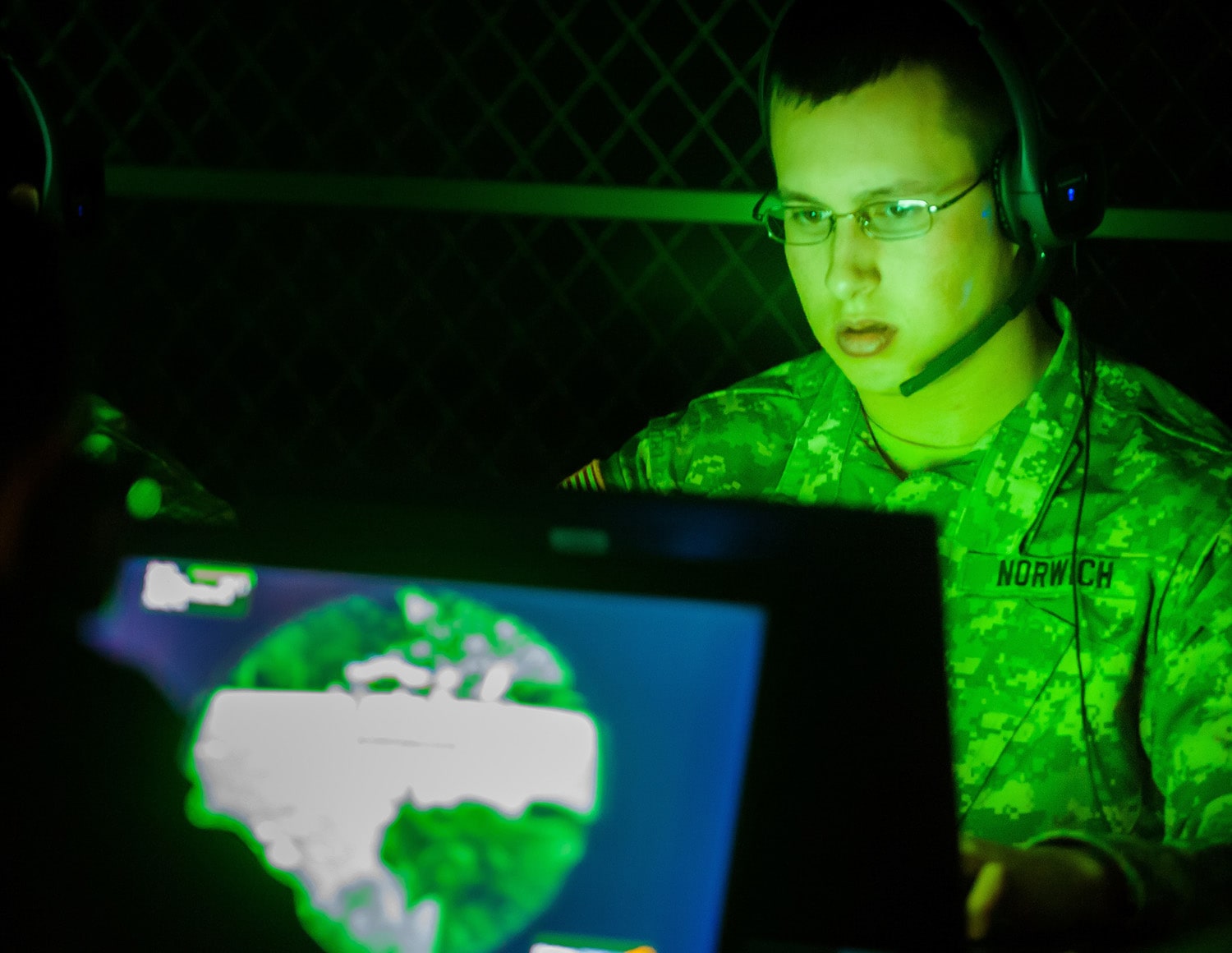 A smartwatch on every wrist, a smartphone in every pocket … and possible cyberthreats in all directions. On Thursday, a dozen Norwich students will combine skills and match wits with like-minded students from across the country in the National Security Agency’s annual Cyber Exercise.

In all, 200 students from 13 organizations will compete in the exercise, which runs Thursday through Saturday. Although participants from the U.S. Service Academies and Senior Military Colleges will compete for the championship trophy, the interns will not. The National Security Agency will announce the winner after competition concludes Saturday.

In all, 200 students from 13 organizations will compete in the exercise, which runs Thursday through Saturday. Norwich University will join the exercise for the second time; its first was in 2019.

Norwich University will join the exercise for the second time; its first was in 2019, when it was one of three Senior Military Colleges invited for inaugural runs. (The 2020 culmination exercise was canceled because of the coronavirus pandemic.) In an email, Phil Susmann, Norwich’s vice president of strategic partnerships and a cybersecurity expert, said he’d long advocated for having Norwich compete.

“Over the course of a cybersecurity career, future cyber leaders and warriors (military or civilian), may take on many different roles, including securing, defending and preserving data, networks and net-centric capabilities,” Janosek, said. “They may design, build, configure, operate and maintain information technology, networks and capabilities. Since these networks are both publicly and privately owned, cyber competency is a must.”

Norwich's students will join the Cyber Exercise from where they've studied this semester, some on campus, some off. Collier said the exercise gives them hands-on experience spotting digital vulnerabilities, cracking encryption and stopping threats. In the combat module, teams from the participating schools square off, taking turns attacking and defending.

“It reinforces the skills to show the students what they’ve been learning all along here at Norwich are viable skills that they can apply in the real world … whether (they) are headed off to military service or the civilian sector.”

As a video from the 2019 competition describes, the culminating exercise sharpens threat stopping and rewards cooperation.

“Cyber ultimately is like a team sport,” Stephon Tonko, a U.S. Army ROTC student, Corps of Cadets member and computer science major who graduated from Norwich University in 2020, said on the video. “There are a lot of different elements that’ll have to play together and work together.”

In the video, Norwich’s team huddles to review tactics, discussing a situation involving public riots and disabled civil services. One teammate suggests asking cybercommand whether federal cyberforces are available to deploy. Another teammate notices 42 states had been affected and wonders why the other eight weren’t.

Beyond skills testing, Collier said the culmination exercise broadens students’ perspectives and personal networks. This weekend’s rivals might one day be colleagues in the Defense Department, armed forces or private sector, he said, and in an industry with more complexity than any single person can master, collective knowledge matters.

“When you run into a problem that you can’t solve,” Collier said, “and you’re pounding your head against a wall and you’re going, ‘My God, what am I doing wrong here?,’’ you have somebody to call and say, ‘Hey, this is what I’ve got going on can I throw this by you?’”

Collier said his own network, which includes several thousand fellow U.S. Army Reserve warrant officers, has paid off in a pinch.

Once, he said, he needed to connect joint network nodes, military communications systems used for remote, satellite-based communication, in two vans parked side by side. Because the nodes are usually miles apart, connected by radio, Collier worried he’d burn out the radio equipment from such close range. He had to connect the vans without using the radio.

So, he called a former warrant officer school classmate from the U.S. Army Cyber Center of Excellence at Fort Gordon in Georgia who happened to be in a room with 15 other warrant officers. Collier asked his question.

“By doing that sounding board conversation with them, I had one of those ‘aha’ moments and I went, ‘You know what, this is going be simpler than I thought it was,’” Collier said. “I went out to the van, it took me five minutes and I got it.”

Although the chance at a trophy might cause some teams to emphasize winning, Collier said Norwich’s team will focus on performing and learning during the exercise.

“Have as much fun as you can have with this, do the best that you can,” Collier said, “and show everyone that the students at Norwich know what they’re doing.”