In ROTC unit’s show of thanks, Vermont National Guard yes to the Yeti 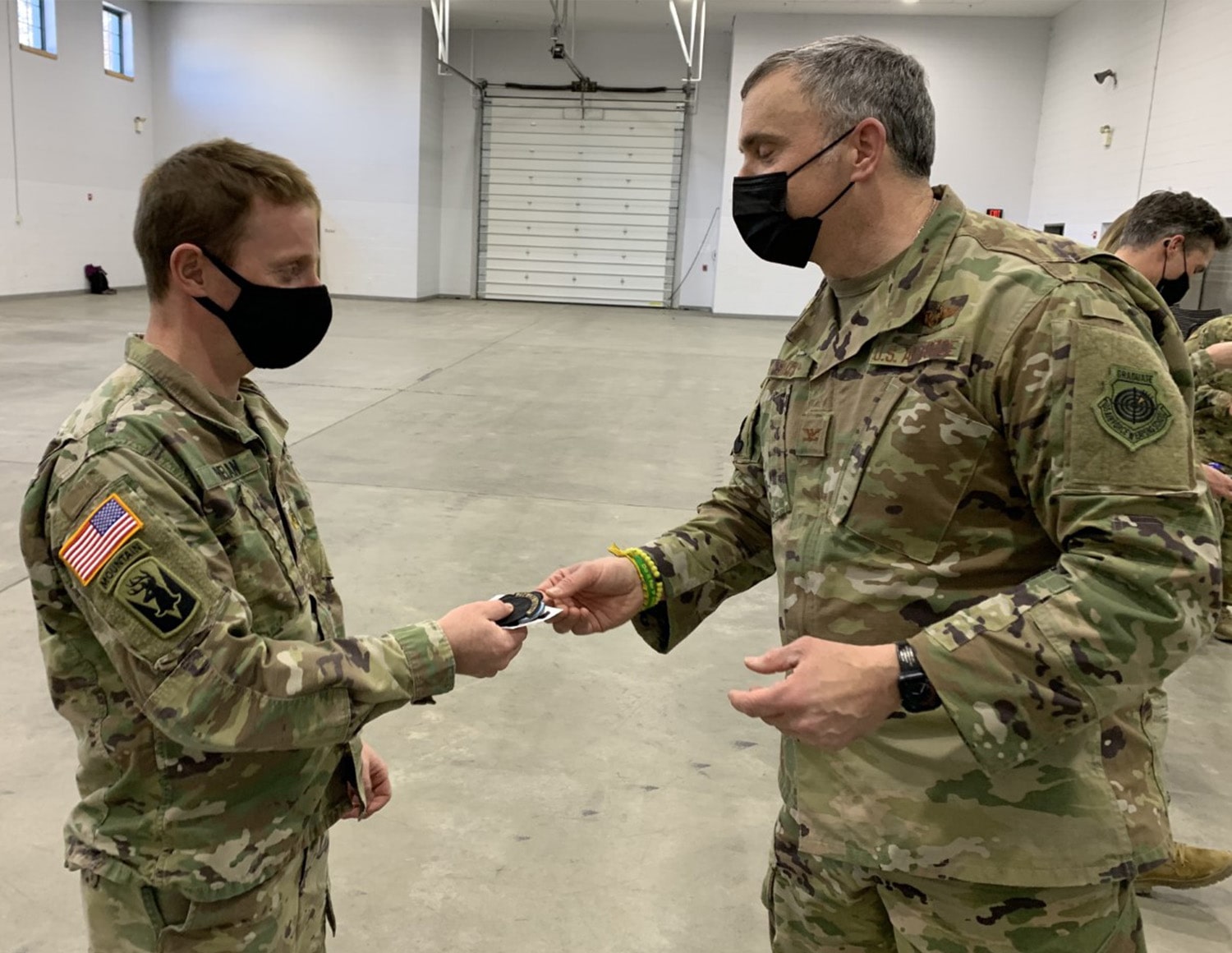 After more than a year of COVID-19 distancing, masks and shattered routines, the promise of vaccines felt like a blessing, U.S. Air Force Col. Matthew Smith said. When Vermont National Guard personnel came to deliver shots March 23, Smith wanted to thank them.

So he summoned his ROTC detachment’s mascot, the Yeti.

Vermont National Guard officials said 200 people, 88% of them students, were vaccinated at the clinic, funded by the Defense Department as part of Operation Warp Speed. And, as the New England Cable News’ Jack Thurston wrote in a Twitter thread, the Vermont Guard personnel administering the shots received memorabilia — patches, masks and special coins — featuring the Yeti, a towering mythological ape-man.

The Yeti on the patch and stickers, which Smith designed, wears a surgical mask perfect for COVID-19 protection. Air Force Lt. Col. Jason Clifford, who teaches aerospace science at Norwich designed the coin. Smith paid for the items himself.

“As cadets and cadre and faculty and staff we’ve wintered over in Northfield, Vermont. So, the patch is representative of the idea (that), ‘You know what? I did it, I can do it.’”U.S. Air Force Col. Matthew Smith, dean, College of National Service

Smith, dean of Norwich University’s College of National Service, said the Yeti is Air Force ROTC Detachment 867’s mascot because it could theoretically endure Vermont’s long, cold winters, which can start in late October and linger well into the spring.

In East Asian mythology, the Yeti, also called Meh-Teh, or the Abominable Snowman, has shaggy gray or white fur and huge teeth and feet. It’s said to wander along through the Himalayan mountains in Nepal and Tibet.

“I’d like to think Yetis are fairly resilient when it comes to the weather and the environment,” Smith said. “As cadets and cadre and faculty and staff we’ve wintered over in Northfield, Vermont. So, the patch is representative of the idea (that), ‘You know what? I did it, I can do it.’”

Although in some cultures, the Yeti is feared, Smith said it may have been misunderstood.

“As I say in my leadership philosophy, sometimes you need to listen to understand. Maybe nobody took an opportunity to listen to the Yeti,” he said. “Sometimes you are on your own, like the Yeti, you do need to be resilient and be your own person.”

“Col. Smith showed his gratitude as a Yeti does — and I know we are all expressing our appreciation to these tireless helpers in our own ways,” Thurston wrote. “So, THANK YOU to everyone who is helping Vermonters through the vaccination process!”

The Vermont National Guard’s personnel may have given the vaccines as an everyday duty, but Smith said their actions were profound. They were saving lives — COVID-19 has killed tens of thousands nationwide — and offering a step toward normalcy.

Because of these shots, Smith said, cadets will be able to attend officer training without worrying about getting sick. Because of the shots, Vermonters can imagine summer seeming normal.

Smith said the Vermont Guard personnel were coordinated and professional, impressive and inspiring. He spoke from his heart, and thanked them.

“I told them, ‘You guys provide hope,’” Smith said, “And that’s the best gift you can give anybody, especially in these challenging times.”