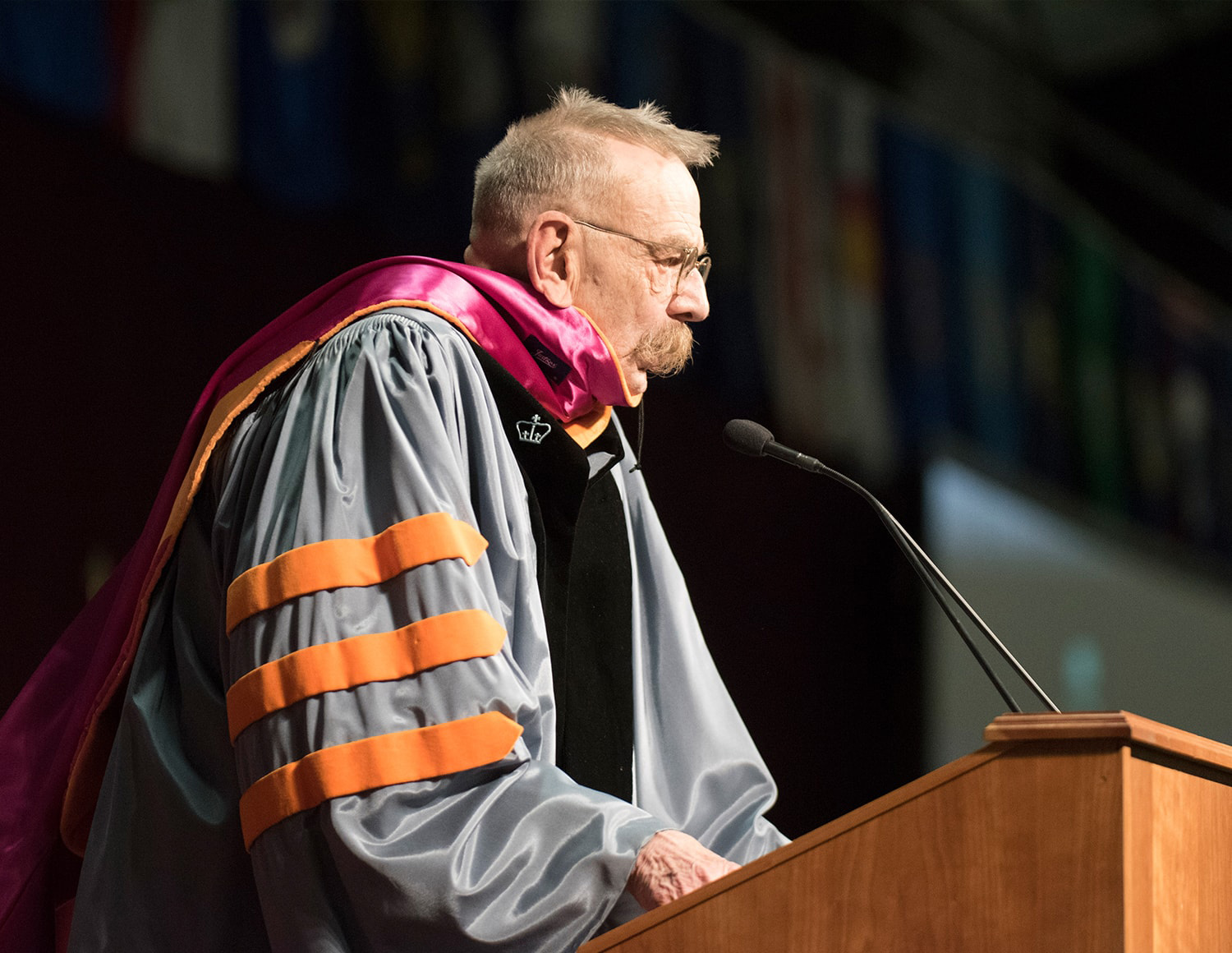 The dedication of a materials testing laboratory in honor of longtime engineering professor Don Wallace, the launch of a virtual Center for Civic Engagement book club and an Admissions Office webinar for prospective students on study tracks for medicine and health careers leads this week’s Norwich University activities calendar.

At 4:30 p.m. Thursday, Norwich University will dedicate the Wallace Materials Testing Facility in Juckett Hall’s basement in honor of Don Wallace, who taught at Norwich for 55 years and was known for holding his mechan­ical engineering students to rigorously high standards.

Wallace, who retired in 2017 and died in November 2018, bequeathed $3 million to the university. In 2018, then-Norwich University President Richard W. Schneider told trustees that a David Crawford School of Engineering endowment had been created to fund The Donald Wallace Visiting Professor Chair in Engineering; $500,000 in testing lab upgrades; and a scholarship fund for deserving juniors and seniors.

“Don’s impact on his colleagues and students during his career was profound and he had already left an impact on the university when he retired,” Schneider said. “What we did not know was that Don would have the final say in this story.”

As his obituary recounts, Wallace was born on June 24, 1934, in Glen Ridge, New Jersey. He served as a U.S. Army medic in 1954 during the Korean war, returned to the United States and graduated with a Bachelor of Science in mechanical engineering from the University of Vermont and added a master’s at the University of Illinois Urbana-Champaign. He joined Norwich’s faculty in 1962.

As a Vermont House of Representatives resolution detailed, Wallace was a dedicated and effective Northfield public servant. From 1986 until 2001, he was the Northfield representative to the Central Vermont Solid Waste Management District; his work led to a waste reduction program’s development and a local transfer station’s construction. He directed the community’s annual Green Up Day activities.

Wallace also served on the Northfield Selectboard from 1999 until 2008 and volunteered for 26 years as an emergency medical technician with the Northfield Ambulance Squad.

Click here for details on the virtual dedication ceremony.

The center in recent years started a Girls Who Code chapter on campus and seeks 15 readers for the discussion. The center will send copies of Saujani’s book to participants first come, first served.

Saujani, an Indian-American lawyer and activist, has degrees from the University of Illinois, Harvard’s Kennedy School of Government and Yale Law School. She made Fortune’s 40 Under 40 list; Fast Company’s 100 Most Creative People list and won the Harold W. McGraw Jr. Prize in Education.

In her book, published in 2019, Saujani recounted her failed 2010 campaign for Congress in New York’s 14th district. Although she had the New York Daily News’ endorsement and Wall Street Journal coverage, she managed just 19% of the vote, losing to Democratic incumbent Rep. Carolyn Maloney’s 81%.

In a 2016 TED Talk with more than 5.5 million views, Saujani said although the dismal poll performance could have crushed her, it taught her to fail, a skill she hopes to help teach other young women. Risk aversion disadvantages women pursuing many careers, especially technology she said, adding that in Silicon Valley no one is legit until they’ve had at least two failed startups.

“Some people worry about our federal deficit; I worry about our bravery deficit,” Saujani said. “Our economy, our society, we’re just losing out, because we’re not raising our girls to be brave. The bravery deficit is why girls are underrepresented in STEM (science, technology, engineering and mathematics) and (executive) suites and boardrooms and Congress.”

Email This email address is being protected from spambots. You need JavaScript enabled to view it. to reserve to reserve a book club spot.

SHOWTIME: The virtual French Tournées Film Festival will screen “Grace à Dieu” (“By the Grace of God”) at 6:30 p.m. Wednesday.

This movie by writer-director François Ozon, which won the Silver Bear Grand Jury Prize at the 2019 Berlin International Film Festival, dramatizes the events leading to the exposure of the most significant sex abuse scandal to date in the French Catholic church. It tells the story of three men who founded an organization to confront the Archdiocese of Lyon, which for decades had protected Bernard Preynat, a Catholic priest and scout leader who had abused dozens of children.

The film focuses on what happens to victims once they speak their truth.

“(Ozon) impressively juggles three protagonists with vastly different home lives whose only links to each other are their shared abuse,” reviewer Andrew Lapin said in October 2019 on NPR. “Over time, they’re finally able to wrest power back over their situation.”

HEALTH IN MIND: From 7 to 8 p.m. Monday, the Admissions Office will discuss its Preprofessional Pathway to ready students for medical/veterinary/dental/pharmaceutical school or careers in physical therapy, occupational therapy, physician assistant, athletic training.

Dr. Ethan Guth, an associate professor of biochemistry and  Norwich’s prehealth professions coordinator will describe how core health-related courses and flexibility to shape a curriculum, will prepare students.

CAREER MINDED: From 1 to 2 p.m. Tuesday, Career and Internship Center partner Fastenal will discuss its internship program and career tracks.

Winona, Minnesota-based Fastenal, a Fortune 500 company, distributes business products including fasteners, lighting, welding and motors. The presentation will go through the Handshake application.

CHECK AND MATE: The Campus Activities Board will hold a virtual chess tournament at 9 p.m. Wednesday. Test your skills against your peers. Click here for details.

The National Security Agency, the National Science Foundation and New Mexico Tech created the challenge to use Discord and Wiki and build a community of practice for expanding cybersecurity skills.

These events complement Wednesday’s continuation of the 2021 Peace and War Virtual Summit presented by the John and Mary Frances Patton Peace and War Center and  Tuesday’s Norwich Writers Series virtual presentation by “Call Me American” author Abdi Nor Iftin.