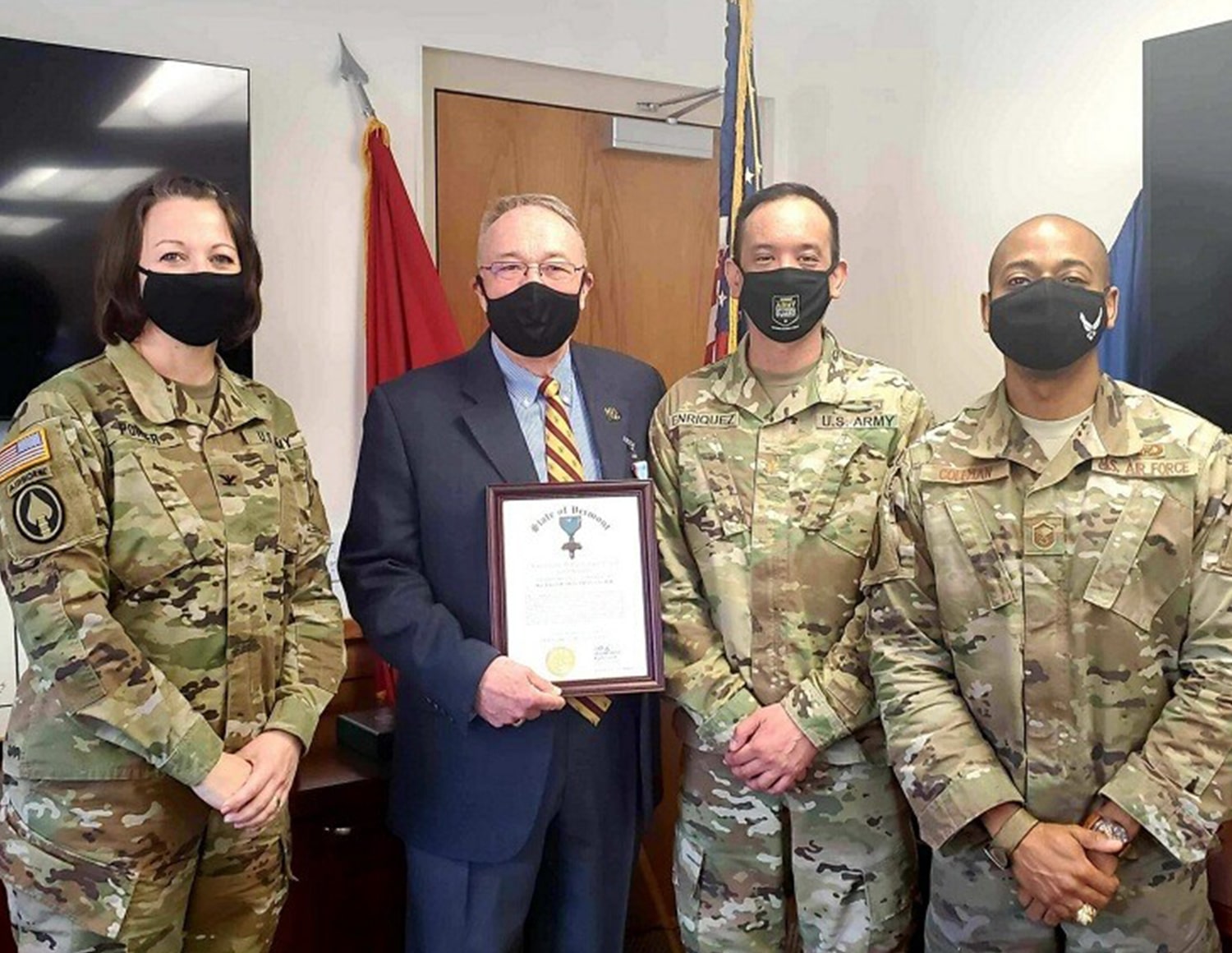 Norwich University has honored President Emeritus Richard W. Schneider’s 28 years of presidential stewardship many ways, renaming a campus building in his honor and etching his name of the top rung the Bicentennial Stairs’ top flight. On Thursday night, the Vermont National Guard’s adjutant general added his own accolade, the Vermont Distinguished Service Medal.

Schneider, a former U.S. Coast Guard rear admiral, received the award in a masked in-person ceremony separate from the Guard’s town hall meeting at the Vermont Guard’s Colchester, Vermont, headquarters. U.S. Army Maj. Scott Detweiler, the Vermont National Guard’s public affairs officer, said the Guard had planned to give Schneider the award in May 2020 when he retired from the university, but the coronavirus pandemic scotched the plan.

“Dr. Schneider’s outstanding tenure at Norwich University has left an indelible mark, one that will carry on in the future leaders of the U.S. military, higher education and business.” Maj. Gen. Gregory Knight, Vermont National Guard adjutant general

Maj. Gen. Gregory Knight, the Vermont Guard’s adjutant general, filled the award citation document with a bullet-pointed list of Schneider’s merits. Knight called Schneider a longstanding and valuable partner who benefited the Guard and Vermont by cultivating a lasting service-before-self culture among students.

“At any given point, nearly 200 NU cadets serve in the ranks of the Vermont National Guard,” Knight wrote, adding that Schneider helped make Norwich a major supplier of lieutenants for all armed forces branches.

“Dr. Schneider’s outstanding tenure at Norwich University has left an indelible mark, one that will carry on in the future leaders of the U.S. military, higher education and business,” Knight wrote. “Dr. Schneider’s service is in keeping with the highest traditions of service to the state of Vermont, the Vermont National Guard and the United States military.”

Schneider said he was surprised and humbled to receive the award — Knight said the Guard wanted to thank him for contributions but wasn’t specific. Having 10 Norwich graduates at the ceremony was special, Schneider said.

“I was very moved and humbled,” Schneider said. “And having Norwich people around me was the icing on the cake.”

Schneider said the university and the Guard have a great symbiotic partnership — the Guard sends troops to the university, which educates them and sends them back as second lieutenants.

“When I accepted (the award), I said, ‘Look, I’m accepting this on behalf of all the people at Norwich who work so hard to support our Guard,’” Schneider said. “We’re proud of them and what they’re doing, they’re deploying again, they’re giving us shots.”

The Guard said in January that 950 Vermont soldiers and 80 airmen would deploy by the end of June to a variety of missions. On Jan. 14, Knight told Burlington, Vermont, television station WCAX-TV, Channel 3, that he couldn’t specify where the Guard personnel would go or what they’d do, but said one deployment area is the U.S. Central Command, which covers Iran, Iraq, Syria and Afghanistan.

As Schneider alluded, the Guard earlier this week helped lead an Operation Warp Speed vaccination clinic on campus for students contracted with or enlisted in the armed forces.