‘SportsCenter’ of attention for a second straight year 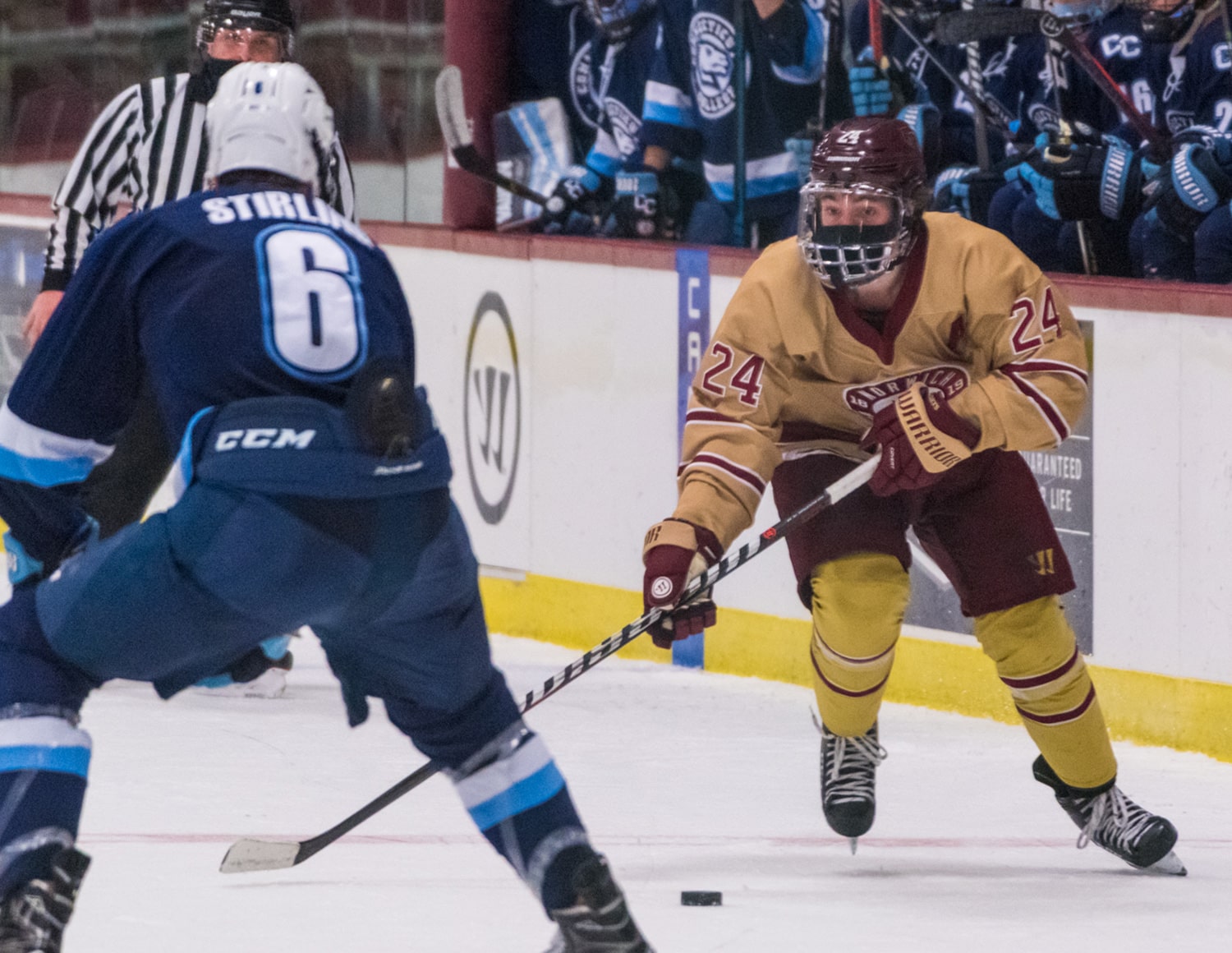 Coronavirus protocols may have kept Kreitzberg Arena’s stands empty at Norwich University ice hockey games this season, but people are still watching, by cardboard proxy, on livestreams and beyond, as a recent national highlight proved.

For the second consecutive season, a Norwich men’s ice hockey goal made the Top 10 Plays on an edition of “SportsCenter,” ESPN’s daily news-and-highlights show. Carter Cowlthorp’s second-period goal against Connecticut College on Feb. 28 ranked as that day’s No. 8 highlight.

The goal broke a 1-1 tie and launched a four-goal flurry for the home Cadets. Norwich would win 6-2. It started with Cowlthorp stripping the puck from Connecticut College defenseman Brett Stirling, who was skating by hoping to clear it from the Camels’ end of the ice. The puck theft sent Stirling’s stick lifting toward the rafters, like a parking garage gate admitting a car.

“I’ve been called a lot of things over the course of my hockey career, but I can honestly say sneaky isn’t one of them.”Carter Cowlthorp ’21, Norwich University men’s hockey forward

Cowlthorp, a senior forward from Boissevain, Manitoba, said the play started innocently, with no hint of subterfuge.

“I was the first guy up the ice, so I was just trying to pressure their (defense). I ended up getting a stick on the puck and the rest was just kind of reactionary,” Colwthorp, a civilian student and business management major, said in an email. “I've been called a lot of things over the course of my hockey career, but I can honestly say sneaky isn't one of them.”

Norwich men’s hockey coach Cam Ellsworth said Cowlthorp did three things right in quick succession, cause the turnover, settle the puck and make the play. He praised the effort and Cowlthorp’s spirit.

“I think Carter has a huge heart and would do anything for his team,” Ellsworth said by email.

Cowlthorp, who had 14 career goals for Norwich and two this season through Thursday, said his other scores have been less glamorous, but he’s glad to score whenever he can. He said he’d seen the SportsCenter highlight a few times by himself but got a burst of text messages when the clip surfaced on Norwich Athletics’ Instagram page.

During the 2019-20 season, before the pandemic halted everything abruptly, Norwich’s Ryan Boucher made “SportsCenter” for his Jan. 13, 2020, falling-down goal against Middlebury. The score reminded the SportsCenter anchors Elle Duncan and Toni Collins of Boston Bruins Hall of Famer Bobby Orr’s similar, and enduringly famous, goal in the 1970 Stanley Cup Finals against the St. Louis Blues.

Cowlthorp said he was glad to have an ESPN moment as Boucher, now a fellow senior, had. But, like Boucher, he was modest.

“His goal ranked higher on the top 10 (Boucher’s was highlight No. 6), so I guess he has one up on me,” Cowlthorp said. “It’s cool that it happened, but I think you move on from it pretty quickly and regain focus.”

Ellsworth said having the play on ESPN put positive focus on his player and his program. But he and Cowlthorp said being able to play mattered most.

“It’s been a unique year for sure, but just being able to be back playing and be in the room with the guys has been the real victory,” Cowlthorp said. “It’s a different atmosphere without fans and with being a senior it’s tough that family and friends aren’t able to physically be at the games. But we know they’re still watching and (we) still feel the support of the Norwich hockey community.”

— EPILOGUE: In September 2021, the Southern Professional Hockey League’s Knoxville (Tennessee) Ice Bears signed Cowlthorp to the team’s preseason camp. He’d finished his college career with 15 goals and 13 assists for 28 points in 78 career games and a +21 plus/minus rating for the Cadets.