Someone told me it’s all happening with kazoos ... 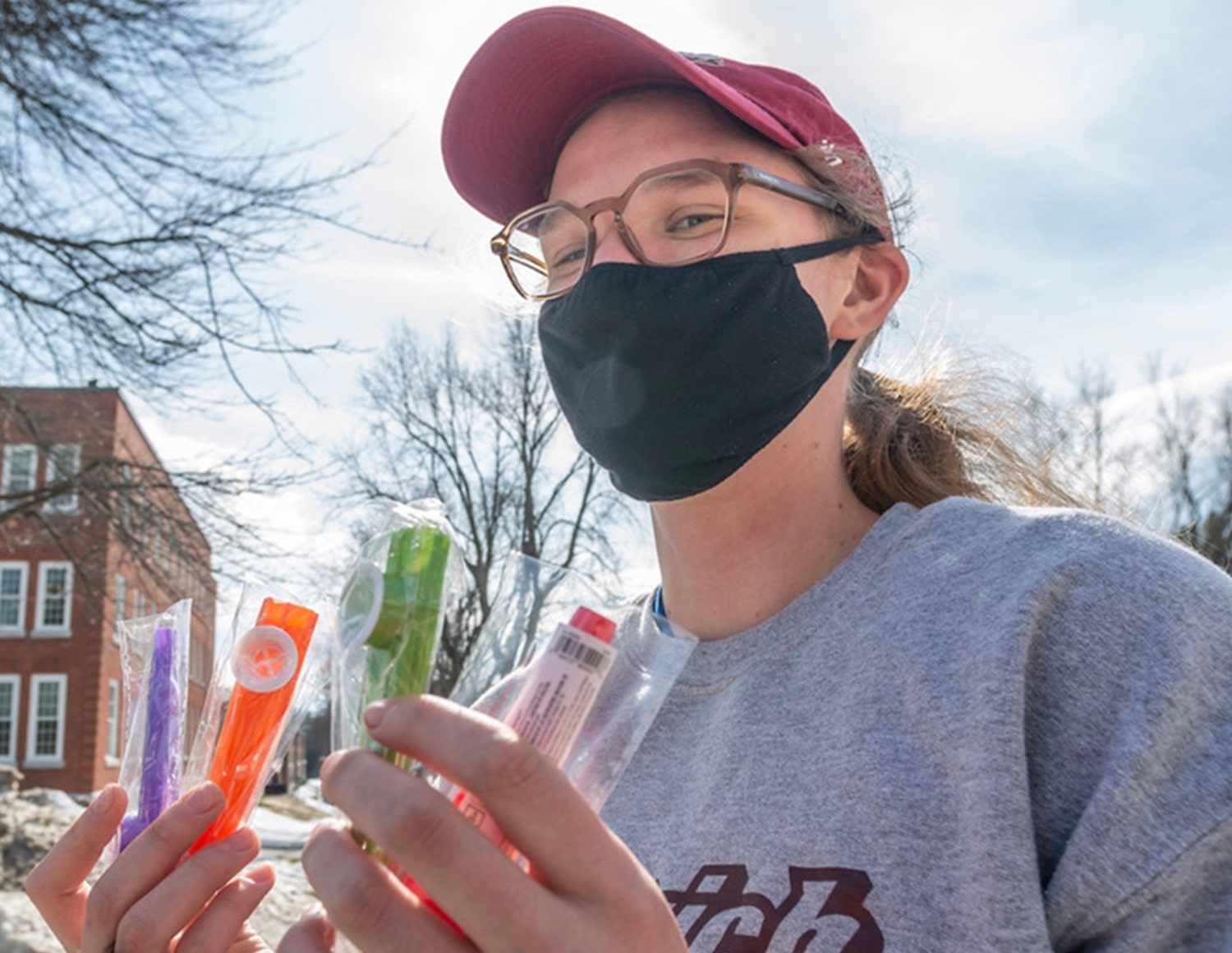 Caitlin Dailey said she was a hopeless musician, or at least one frustrated enough to quit. Three years of saxophone playing got her to the third chair in her middle school band, behind two sixth graders who’d just taken up the instruments.

“It was awful,” the Norwich University senior said of the memory. “My older brother played the trumpet, and I wanted to be like him. But I realized I didn’t like it.”

Dailey wouldn’t quit music altogether. This semester, during a flash of downtime from her Corps of Cadets duties, softball team practice and her studies, she discovered an instrument she could master quickly and share with others who could also master it quickly.

“Nobody can be sad when they have a kazoo. It’s like a law or something.”Caitlin Dailey, Norwich University senior

If you listen closely, you might hear their blissful bleat somewhere on campus.

Yup, those are kazoos.

Dailey, a biochemistry major from Topsham, Maine, said she decided last semester that she wanted a kazoo. And because kazoos apparently have that can’t-have-just-one quality ascribed to some potato chips, she ordered a dozen of them.

“Nobody can be sad when they have a kazoo,” Dailey said. “It’s like a law or something.”

She handed a few kazoos to friends, who started playing. It was fun while it lasted, but that wasn’t long. Some kazoos got lost or stopped working, she said. (Nobody likes a kaput kazoo.) Some people were sad not to have kazoos.

“I went a little overboard,” Dailey said of the eight-dozen order. “I have them in my pocket and I’ll hand them out to people I see. It’s great to see people’s faces when you give them a kazoo. They’re kind of confused at first, but you can’t be mad at a kazoo.”

McGrath called Dailey a superstar and a rockstar (her stars aligned!) who radiates perpetual positivity and spirit-lifting humor. She recently goofed on McGrath, matching his pink dress with boat shoes outfit and penciling on a goatee for a “twinning” photo.

“I think the kazoo idea is ridiculous!” McGrath wrote in an email. “I also think it is silly, inspired and uplifting.”

McGrath said Dailey asked him to pick his kazoo color, but he closed his eyes and drew from a collection. He picked orange, her kazoo color. (The set had no Norwich maroon.)

“I may have run in another direction if it were anyone other than Caitlin Dailey,” he said, “but I barely flinched.”

Zen Taylor, a senior civil and environmental engineering major and cadet, said he learned about Dailey’s kazoos through Snapchat during a breather from homework, and smiled knowingly.

“Caitlin has always been a hilarious figure at this school,” Taylor wrote in an email. “And it wasn’t too surprising that she had almost a hundred of them.”

Did someone see Darth Vader?

Dailey said the imperial march from the “Star Wars” movies has been a popular tune and Taylor said Regimental Commander Caleb Miller once played a kazoo bugle call as he waited for cadets to assemble at formation.

“You could feel the entire company’s spirits lift a little,” Taylor said.

Lizzie Niven, Dailey’s softball teammate and a senior mechanical engineering major, suggested she was the original source of the kazoos, having started to order some as a gift for Dailey. But Dailey finished the order.

Niven said her transition from ukulele player to kazooist has been easy and that if a campus kazoo band ever forms, it will play “Norwich Forever” first, then whatever new tunes it creates. (And they just missed the Grammys. Maybe next year.)

“Overall, the kazoos have made for some silliness to cut through the mundane life of COVID restrictions,” Niven wrote in an email. “They really just give you something to laugh about at any time and I appreciate Caitlin so much because she is always full of surprises like this.”

McGrath said he keeps his kazoo in his top desk drawer, ever available. Though he’s played it, he said he’s produced no discernable tune. Mostly, he said, the kazoo made him glad.

“Receiving the kazoo made me smile on the warmest, brightest day we have seen on campus in several months,” he said.


A different Norwich made kazoo headlines in 2008.

On May 25 that year, several hundred people (news reports say 500 to 800) piled into Dodd Stadium in Norwich, Connecticut, trying to set the Guinness record for largest kazoo ensemble. They fell short of what was then the official record, 2,679 people set on New Year’s Eve 2006 in Rochester, New York.

The “Big Red Nose Show” at London’s Royal Albert Hall has since toppled that mark, forming a 5,190-participant kazoo orchestra on March 14, 2011.