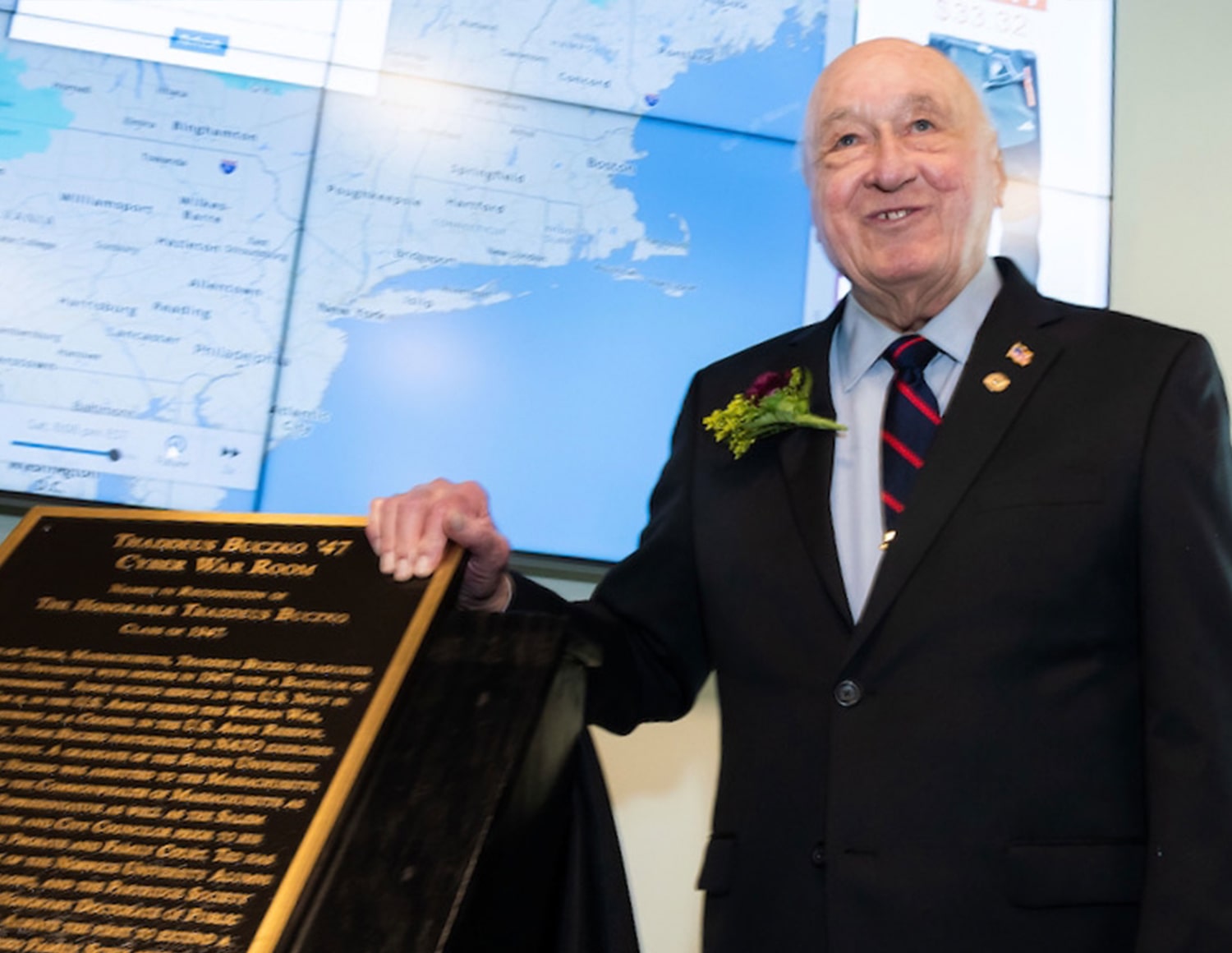 Thaddeus “Ted” Buczko, a revered judge, World War II and Korean War veteran and Norwich University graduate and patron for whom Mack Hall’s Cybersecurity War Room was named in 2018, died Sunday. He was 95.

Buczko was born Feb. 23, 1926, in Salem, Massachusetts, to Ignacy and Veronica Buczko; he was the middle child of seven children. As Buczko’s obituary details, his parents were Polish farmers recruited by Salem mill owners who offered the promise of a better life.

Buczko served aboard the USS Bearss, which Norwich University’s Archives note, was part of Task Force 92 in the Aleutian Islands Theater, which bombarded Japan’s northernmost islands. The destroyer was asea during World War II’s “last shot” off the Japanese coast.

The USS Bearss was named after another Norwich alumnus, U.S. Marine Corps Brig. Gen. Hiram Bearss, who fought in served in the Philippine-American War and both world wars and was awarded the Medal of Honor. (Bearss and Buczko both have their names etched on the Bicentennial Stairs on campus.)

“I had no idea I was present for this historic event until I read about it many years later in a veterans’ magazine,” Buczko told historian and Buczko biographer Bonnie Hurd Smith in 2015. “We heard that the Germans had surrendered, but we were all the way over in the Pacific. … We heard about the bombs being dropped in August, but we were unaware of the consequences and had no idea what was going to happen next.”

After World War II ended, Buckzo returned to Norwich University to finish his degree. He graduated in 1947 with honors and a Bachelor of Arts in government. He commissioned into the U.S. Army and served in the Korean War as a unit tank commander and the assistant division staff judge advocate with the 3rd Armored Division.

Buczko later entered the Army Reserve and would retire as a colonel. The Army awarded him a Meritorious Service Medal in 1975 and a Legion of Merit in 1979. When he retired from the Army, the obituary said, Buczko was chief of staff of the 94th Army Reserve Command and had supervised more than 12,000 citizen-soldier reservists in more than 100 New England units.

Amid his armed forces service, he earned his law degree from the Boston University School of Law, earning admission to the Massachusetts Bar in 1951.

As masslive.com reported, Buczko built a four-decade record of public service. He served on the Salem City Council from 1956 to 1959 and in the Massachusetts House of Representatives from 1959 to 1964. He was elected Commonwealth of Massachusetts auditor in 1964 after a few-months stint as Salem postmaster. He held the auditor post until 1980, when he took a judgeship in the Salem Probate and Family Court, nominated by then-Massachusetts Gov. Ed King.

Buczko served in Salem Probate and Family Court until 1996, spending 10 years as presiding judge, before retiring. (He was then 70, the mandatory retirement age.)

Salem Mayor Kimberley Driscoll told the Salem Evening News that fluency in many languages let Buczko connect with people as a politician, judge and public official.

Driscoll said memories of his Polish immigrant parents’ struggles informed Buczko’s interactions with recent immigrants who sought help from Salem’s Board of Trust Fund Commissioners, on which Buczko served.

“He always cared so deeply about people,” Driscoll told the Salem News.

“Ted has embodied the Norwich guiding value of service before self,” Schneider said.

Over the decades, Buczko served Norwich with memberships in the Norwich University Alumni Association, Norwich’s Board of Fellows and the Partridge Society Board. In 1996, the university awarded him an Honorary Doctorate of Public Service. In 2019,

Buczko’s obituary said he was dedicated to Salem, his alma maters (which include Norwich University), veterans, Polish-American organizations and the Pope John Paul II and Kosciuszko Foundations. The obituary added that Buczko was particularly known for engaging just-starting-out young people asking about their education, interests and ambitions and encouraging them to enter public service.

“No one was interested in me when I was young. No one reached out,” Buczko is quoted as saying. “I like to reach out and help in whatever way I can.”

Massachusetts courts have honored Buczko as Norwich has, putting his name on a landmark. In 2014, the Massachusetts state Senate passed a bill to designate the Essex Probate and Family Court in Salem in Buczko’s honor. State Sen. Joan Lovely, D-Salem, and state Rep. John Keenan, D-Quincy, backed the bill for the designation, which passed in the Massachusetts House on June 30, 2014.

“Judge Buczko is a titan of public service, inspiring generations of citizens to answer the call of civic duty,” Keenan said in a statement. “We are proud to honor him in this special way.”

Buczko never married. He was surrounded by members of his large and loving extended family.

READ MORE ON CYBERSECURITY AT NORWICH: