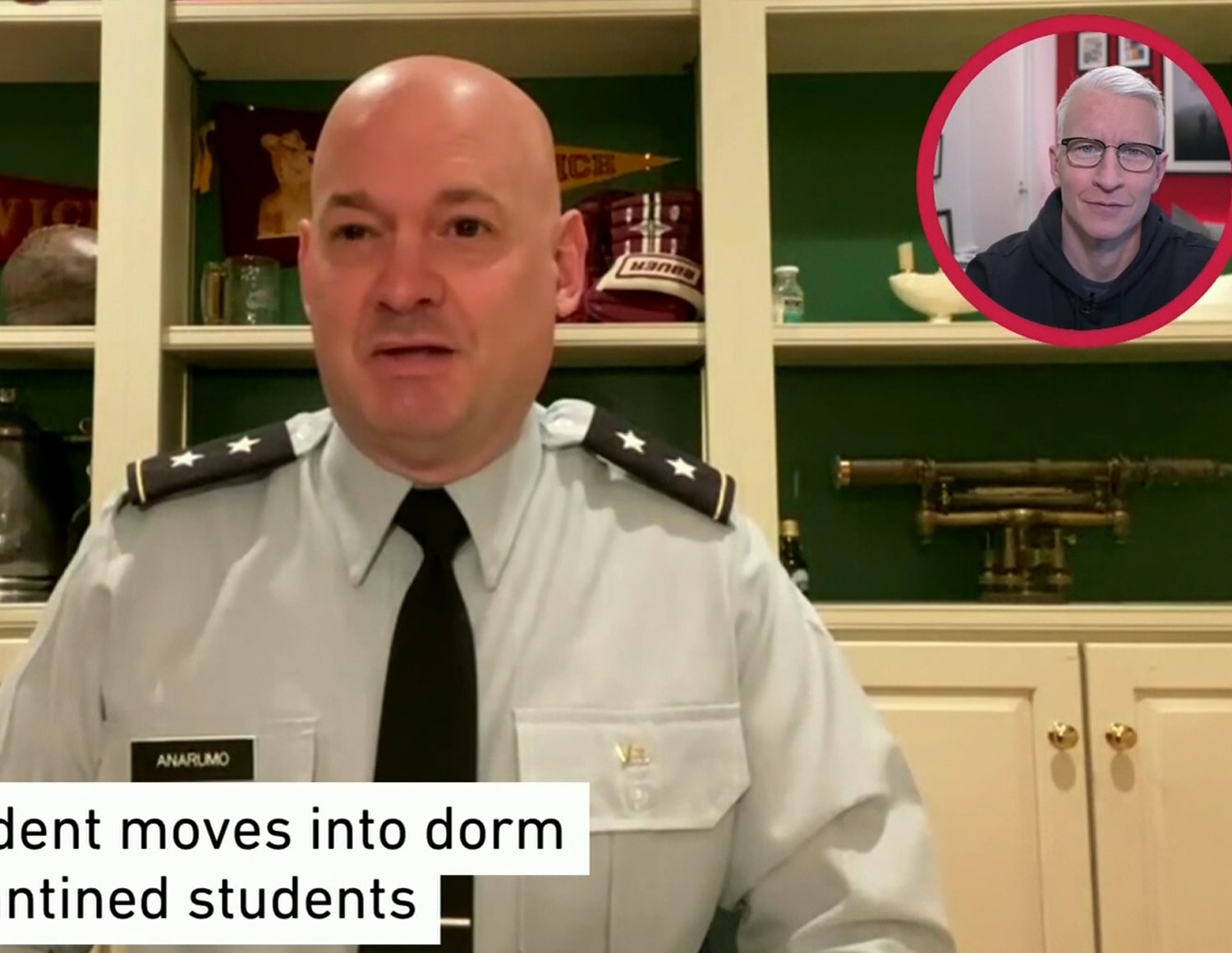 Have you heard the story about the Norwich University leader who moved into a student dorm in a COVID-19 pandemic show of solidarity? Sure you have. And now, thanks to a pair of national media appearances last week, America has, too.

President Mark C. Anarumo’s move into Wilson Hall, a Corps of Cadets barracks, on Jan. 29 began as an internal story, shared by the president himself in brief update videos.

On Feb. 17, the alt-weekly newspaper Seven Days picked it up. Reporter Chelsea Edgar described Anarumo’s fizzled attempt at a stealth entry (a wily student absconded with his room sign), how he ate the boxed meals students were eating (except for the time he ordered 39 pizzas for Wilson’s residents after his cover was blown) and his heard-through-the-bathroom-walls crash course in Generation Z music, particularly Post Malone. (Blasting rap music abruptly stopped.)

Norwich President Mark C. Anarumo told The New York Times he came to his Norwich post strongly believing that quarantining’s benefits had to be weighed against its mental-health toll.

Last week, The New York Times in print and CNN’s Anderson Cooper on broadcast shared the story within 24 hours of each other.

On March 9, Jack Thurston on New England Cable News and NBC 10 in Boston, did his own report on Norwich’s COVID-19 battle. NECN filmed Anarumo eating with students in the Wise Campus Center Dining Hall, which opened for the semester March 8.

New England Bureau Chief Ellen Barry wrote the Times’ 1,800-word story, which posted online March 4 and made the March 5 Kindle edition’s front page and was published in print. The story chronicled students coping with pandemic-prompted isolation and Anarumo’s chance meetings with them during his barracks stay. Some meetings came in the aforementioned bathroom, which was on the opposite side of Wilson 512, the room Anarumo occupied; some meetings came in stairwells, where students had lingered, hoping to see or talk to him.

In the Times story, Anarumo recalled coronavirus pandemic restrictions at the Air Force Academy in Colorado Springs, Colorado, where he worked before taking Norwich’s reins in June. Air Force Academy seniors, Anarumo told the Times, were isolated in single rooms, studying remotely and eating takeout meals. Students seen within 6 feet of one another were sent on marches as punishment.

Anarumo described hearing that first one, then two students had committed suicide in dorms within two days. He described how over three decades serving in the U.S. Air Force, from which he retired in August, and the U.S. Army he’d lost 11 men and women to suicide.

Based on this grim experience, Anarumo told the Times he arrived at Norwich strongly believing that quarantining’s benefits had to be weighed against its mental-health toll. This is why, he said, he has stressed that students who wanted to leave campus and study remotely for the rest of the semester could do so without fearing stigmatization and receiving prorated room-and-board refunds.

In The New York Times’ article, Norwich students described coping with the semester’s second in-room quarantine, which started Jan. 25, prompted by a COVID-19-positive case spike (from the 30s to 60s to 80s). Students had endured a weeklong in-room quarantine after arriving in mid-January.

Junior David McQuillan told Barry how he divided his room into quadrants, one for work, one for play. Junior Meredith Osburn described using a planner to write out a detailed daily schedule, which she dutifully followed.

But isolation was wearing. Sophomore Gabriel Williams described staying in his 10 foot-by-10 foot room for five days and seeing no one except for brief brushes in bathrooms or the cafeteria. He told Barry he was distressed enough to seek a roommate.

However, Jamaal Shaw, a sophomore, told Barry how he and Williams had telephoned Anarumo and he appreciated Anarumo’s gesture. (The president posted his phone number on the door sign; the digits were instantly and widely shared.)

“We saw how he was living, and also that he wanted to see what it was to be a cadet,” Shaw told the Times. “That’s something. Even though it’s very small, it’s something, that he took that extra measure to see if morale was high.”

On March 5, Anarumo appeared on Anderson Cooper’s digital “Full Circle” program for a 15-minute interview. He said the second in-room quarantine was a drastic, semester-saving measure. He said he moved into Wilson to show students he wouldn’t ask them to endure anything he wouldn’t endure himself.

“It was very important to see (students) out and about,” Anarumo told Cooper. “I’d check on them (asking) ‘Are you OK?’ … Those very honest interactions ended up being very powerful, both for them but mostly for myself.”

Anarumo told Cooper he watched not only Norwich’s students, but his own four children, one a student at the Air Force Academy, one a student at Rutgers University, to see how young people coped with COVID-19. As he’d told Barry, Anarumo told Cooper the need to break isolation’s tension was paramountly important — if it took 1,500 COVID-19 positives to prevent a suicide, or even the thought of one, he’d do it.

As with Barry, Anarumo told Cooper about meetings with students. Some students cried; others pleaded with him to keep the university open, saying, “We need this.”

Anarumo said he heard the messages and would factor them into his leadership.

“How you connect, how you monitor, how you give them healthy outlets for things, that’s driving my decision process,” he told Cooper. “We really do have to keep fighting for these young men and women. They’re doing everything right.”