The sound of service 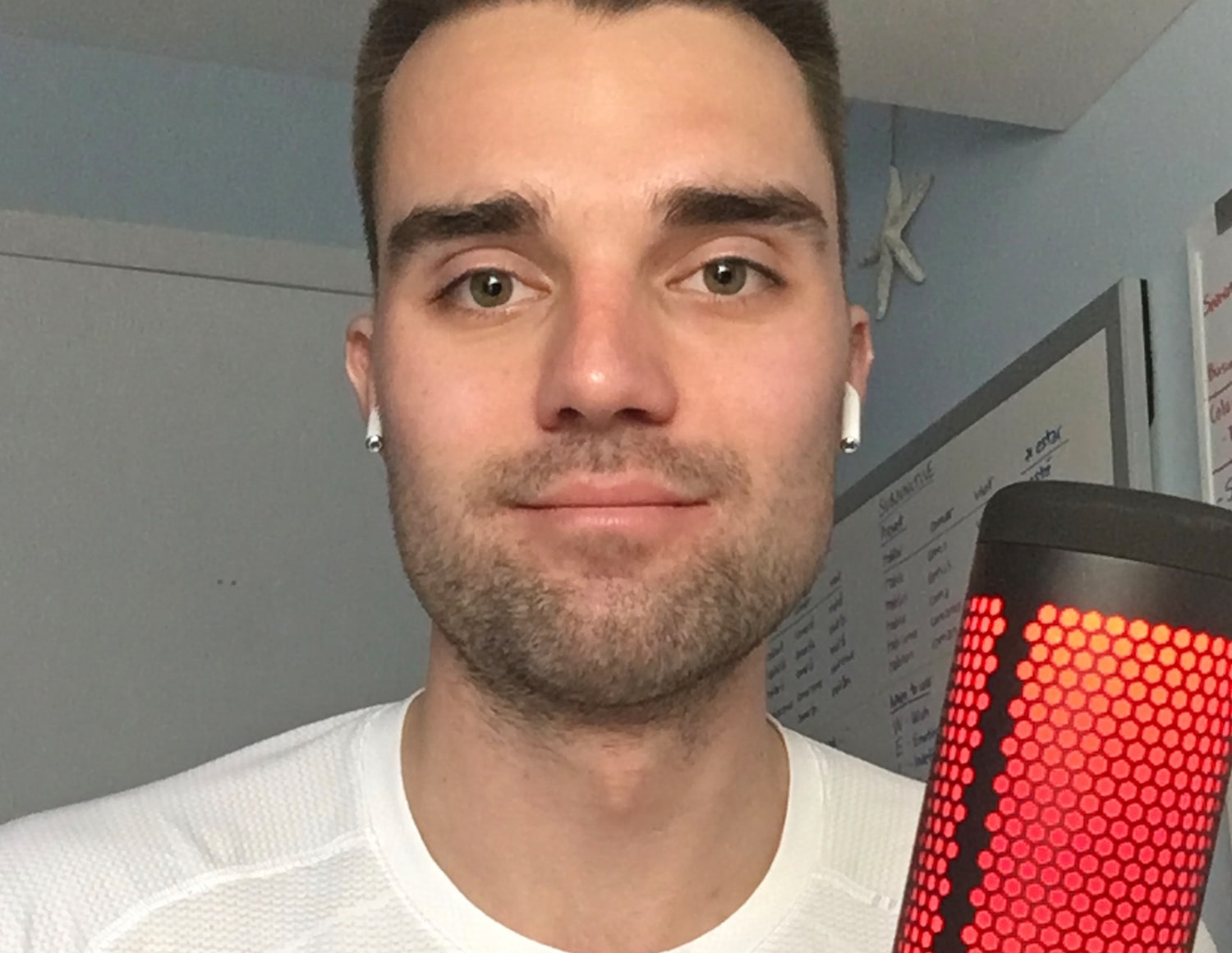 Braeden Ostepchuk, as scores of Norwich University students had before and since, learned the Guiding Values and used them as a behavioral lodestar through academics, athletics and campus life. He succeeded at seemingly every turn, becoming class valedictorian and an ice hockey Academic All-American.

When Ostepchuk’s postcollege life reached a crossroads, the values came through again, becoming a model for drafting his own.

Ostepchuk, a 27-year-old 2018 Norwich graduate who lives in Lethbridge, Alberta, said he chose Norwich partly because of its storied hockey program. At Norwich, he thrived as a goaltender, thrice earning College Sports Information Directors of America All-American honors and once earning New England Hockey Conference Goalie of the Year.

“I didn’t have hockey, I didn’t have a job, I didn’t have school and because it was the pandemic I wasn’t really going out or socializing. I had, for the first time in a long, long time, a chance to stop.”Braeden Ostepchuk ’18

In 2016-17, as a junior, Ostepchuk backstopped the Cadets to the program’s fourth NCAA Division III National Championship. He led the nation with a perfect 16-0-0 record for a 1.000 winning percentage, becoming the first Norwich goaltender to do so.

Ostepchuk was good enough to make the pros, playing for the Greenville, South Carolina Swamp Rabbits of the ECHL, and Pensacola, Florida, Ice Flyers, Cincinnati Cyclones and Evanston (Indiana) Thunderbolts of the Southern Professional Hockey League.

Since first lacing skates at age 5, Ostepchuk had dreamed of playing in the National Hockey League. But as September 2020 arrived, and the world prepared to slog through a pandemic-restricted autumn, Ostepchuk was sanguine about his seemingly dimming NHL chances. He knew how old he was and how many things would have to break just right for him to reach the league.

Though he still loves hockey, he retired, opting out of the 2020-21 season, which he figured would have been his last. Although he had a feeler to join a U.S. startup business, transborder travel was restricted with COVID-19 spreading.

Moving on would require thought and an identity shift from hockey player to something new. He was home, contemplating the future.

“I decided to spend some time at home and hunker down,” he said. “I didn’t have hockey, I didn’t have a job, I didn’t have school and because it was the pandemic I wasn’t really going out or socializing. I had, for the first time in a long, long time, a chance to stop and to pause and to look within instead of always looking externally.”

So à la “Hamilton,” Ostepchuk retreated and began reading every treatise on the shelf about health, fitness, and human performance. He also began watching YouTube videos and playing back podcasts on these topics.

Down the ‘rabbit holes’

One “rabbit hole” led to another, he said, as he dug a mental warren through longevity, disease, biochemistry, neuroscience and psychology.

Ostepchuk had already proved he could succeed when he focused his mind. He held a 4.0 cumulative grade-point average through all eight semesters at Norwich as a mechanical engineering major. He won the Freshman Award for having the top GPA in the entire freshman class. He is a four-time University scholar, three-time NEHC All-Academic team selection and also won the Freshman Engineer Award.

As a Norwich senior, he spent off-ice time on an engineering team that designed and built a prototype for an inflatable solar array that could power a future Mars colony. The project won the 2018 NASA BIG Idea Challenge.

Because his Canadian citizen status kept him from accepting the competition’s major prize — a summer NASA internship — he worked instead with Vanguard Plastics Corp., a Southington, Connecticut, company owned by Norwich alumni Larry Budnick ’64 and Chris Budnick ’86.

After graduating, Ostepchuk earned a master’s in leadership from Norwich’s College of Graduate and Continuing Studies in 2020.

“I look at Braeden as one of the most complete human beings I’ve ever met,” former Norwich men’s hockey coach Mike McShane told the Norwich Record, citing Ostepchuk’s maturity, intelligence, and athletic ability. “To be able to combine all of those things and become a tremendously successful person at that age is remarkable.”

This past year, as the months passed, Ostepchuk tried some of the life-bettering techniques he’d read about — fasting, meditation, exercise programs. Results encouraged him — he felt better, looked better and seemed to have chased off worry.

“I had way less anxiety, way less stress, whereas normally I’d be losing my mind trying to figure out what would happen next,” he said. “I was feeling the best I’d ever felt in my life, I had no energy lulls, I had no brain fog.”

With his newfound focus, and with the U.S. startup job seemingly not happening, Ostepchuk, at a friend’s suggestion, planned his podcast, “Learn II Perform,” which he’d launch Dec. 8. Starting was feasible — the technology was graspable and the cost was fairly low.

Ostepchuk said he also reconsidered the idea of life values, something he’s learned about from watching Norwich classmates commission and learning from Norwich faculty who’d served in the armed forces, including Brian Bradke, a former U.S. Air Force fighter pilot who’d been an assistant professor of mechanical engineering.

Ostepchuk said he knew service before self happened in uniforms of all sorts, medical, clerical, military, and with no uniform at all, everyday clothes, and he thought maybe his new show could help him fulfill the idea. He’d written his own guiding values for life ­— gratitude, self-care and service.

Schneider, in his Jan. 19 “Learn II Perform” episode, discussed Norwich’s Guiding Values, which he’d formulated after reading university founder Alden Partridge’s writings. Schneider had the values printed on hard cards and handed them to anyone in arm’s length.

“I’d give them to parents of prospective students,” Schneider said, “and say, ‘Lookit, if you want your student to learn something in addition to their mechanical engineering that will serve them for a lifetime and make them the leaders they need to be for America or whatever country you might be coming from? Take a look at these.’”

So far, Ostepchuk said, “Learn II Perform” is a passion project he treats like a job, showing up every day to do. He figures he’s invested at least 1,000 hours in podcasting in just a few months. He said he’s unsure whether the podcast will evolve into a career — he’d love it if it did.

Whatever happens, though, he said he’ll keep trying, learning and serving. Schneider’s promise that rewards come to people who give is playing out.

“I feel rewarded already, because I’ve had so many people — friends, and family and strangers — people that I haven’t known or talked to for five, 10 years have reached out to me,” he said. “I’ve been able to engage in dialogue with and learn from some brilliant and amazing people.”