No one’s ever going to keep us down again ... 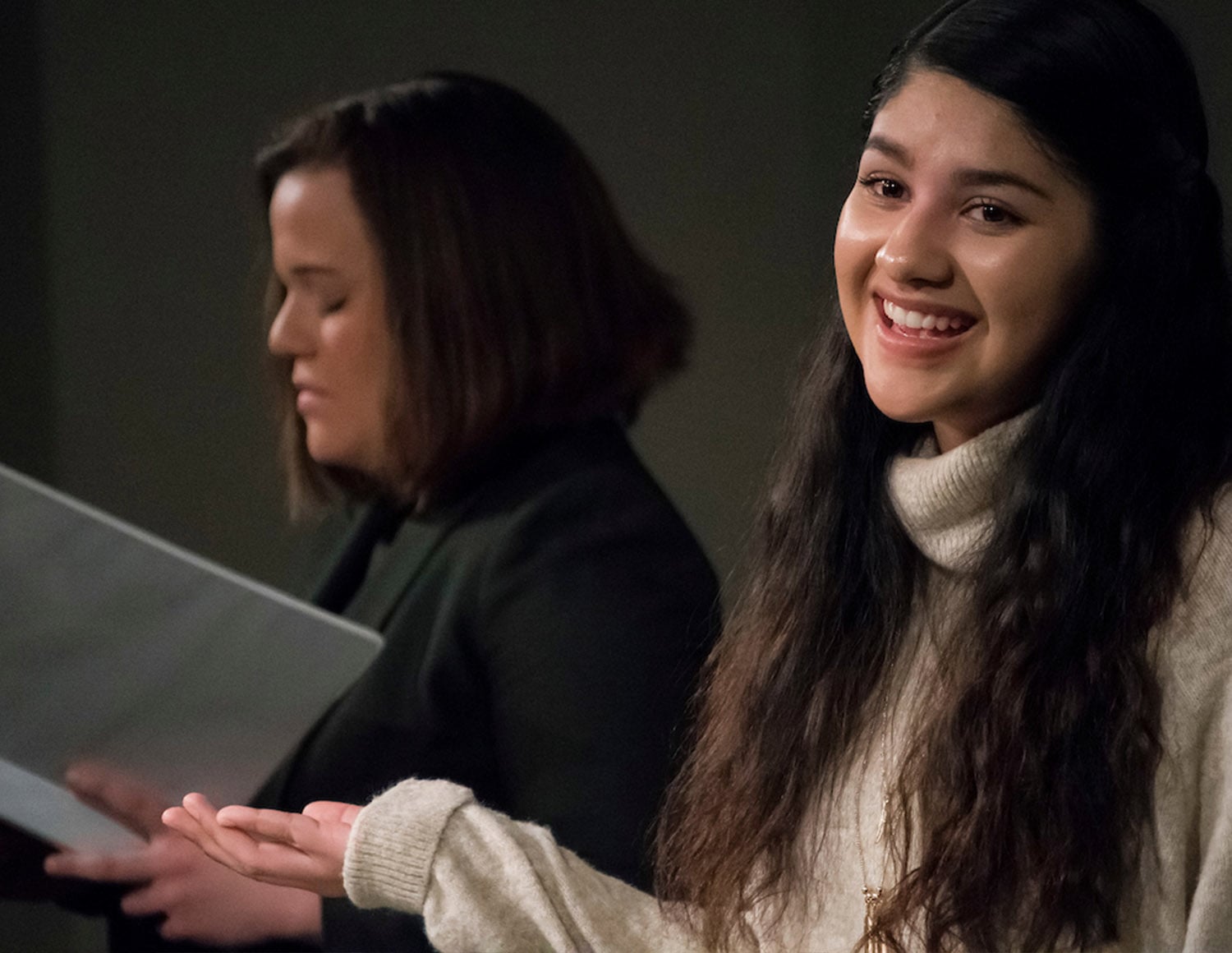 “Every female I have had the pleasure of working with (have been) some of the strongest humans I’ve ever met,” said Khoury, a senior criminal justice major and English minor. “As women, we are stronger than stereotypes believe.”

Khoury, a civilian student, has worked behind the scenes to produce the fourth-annual Norwich Voices for International Women’s Day, scheduled virtually from 7:30 to 8:30 p.m. Friday over Zoom. The university and its Pegasus Players theater troupe are presenting the spoken-word event, which prepandemic has run in Mack Hall’s auditorium. Click here to join the performance.

“I am vibrant with excitement and radiating proudness already. “We’ve all worked really hard to get this production right.” Surayah Pierce, freshman English major

“We can all choose to challenge and call out gender bias and inequality,” copy from the International Women’s Day website said. “Collectively, we can all help create an inclusive world.”

Virtual events abound for the global International Women’s Day observance; in the United States, sessions include computer coding chats, piano recitals, bicycle rides and dance classes. Myriad discussions are slated, some covering the future of work, women’s career advancement in health care and moving on from the coronavirus pandemic. A few sessions are for men, including one on challenging gender assumptions.

Pegasus Players adviser Jeffry Casey, an assistant professor of theater, and adjunct English instructor Kim Ward are advising Norwich’s event, which will include readings of stories, poems and speeches on women’s and women-identified people’s triumphs and struggles campuswide and worldwide.

About a dozen students present and past, faculty and staff will perform; five people have worked on the crew, Casey said.

As in the past, the event is student-directed; Khoury and Surayah Pierce, a freshman English major lead this year. The virtual format will let alumni join Casey said, including Sonja Jordan ’19, an English degree earner from Enterprise, Alabama, who helped develop the first two International Women’s Day events on campus. Casey said the virtual format will add another International Women’s Day recording to a growing video time capsule of campus life.

“I am vibrant with excitement and radiating proudness already,” Pierce wrote in an email. “We’ve all worked really hard to get this production right and the cast is filled with amazing and strong women and men.”

Ward, who’s working on the International Women’s Day event for the third year, said she hopes to even the gender balance of voices on the Hill, and elevate women’s perspectives, especially from the Corps of Cadets.

“It’s important in this military/male-dominant school that we get the voices and stories of women-identified people on campus out there,” Ward wrote in an email.

Casey said women he’s taught, worked beside and befriended have told him being heard is often women’s biggest struggle. He hopes International Women’s Day will step toward correcting that.

“Women not being heard contributes to all of the other problems,” Casey said, alluding to gender inequality, social and economic. “This happens when colleagues don’t listen to you, women are ignored. But it’s particularly acute when women are saying, ‘Hey, this environment is hostile to me.’”

Crystal Drown ’19, a copy center specialist and junior graphic designer in Norwich’s Office of Communications, will deliver two readings, one on womanhood and one on self-kindness.

“It took me a long time to stand up for myself and say, ‘No more, I am worthy,’” Drown, who advises many student committees, including the Civilian Junior Ring Committee, wrote in an email. “I have value, I am here and have something to add. I deserve respect and to be loved.”

“Women have made strides over time and we are not done,” she wrote. “People may say we are equal but that is far from the truth.”