Let’s face it: Cardboard proxies to stand for fans at sports contests 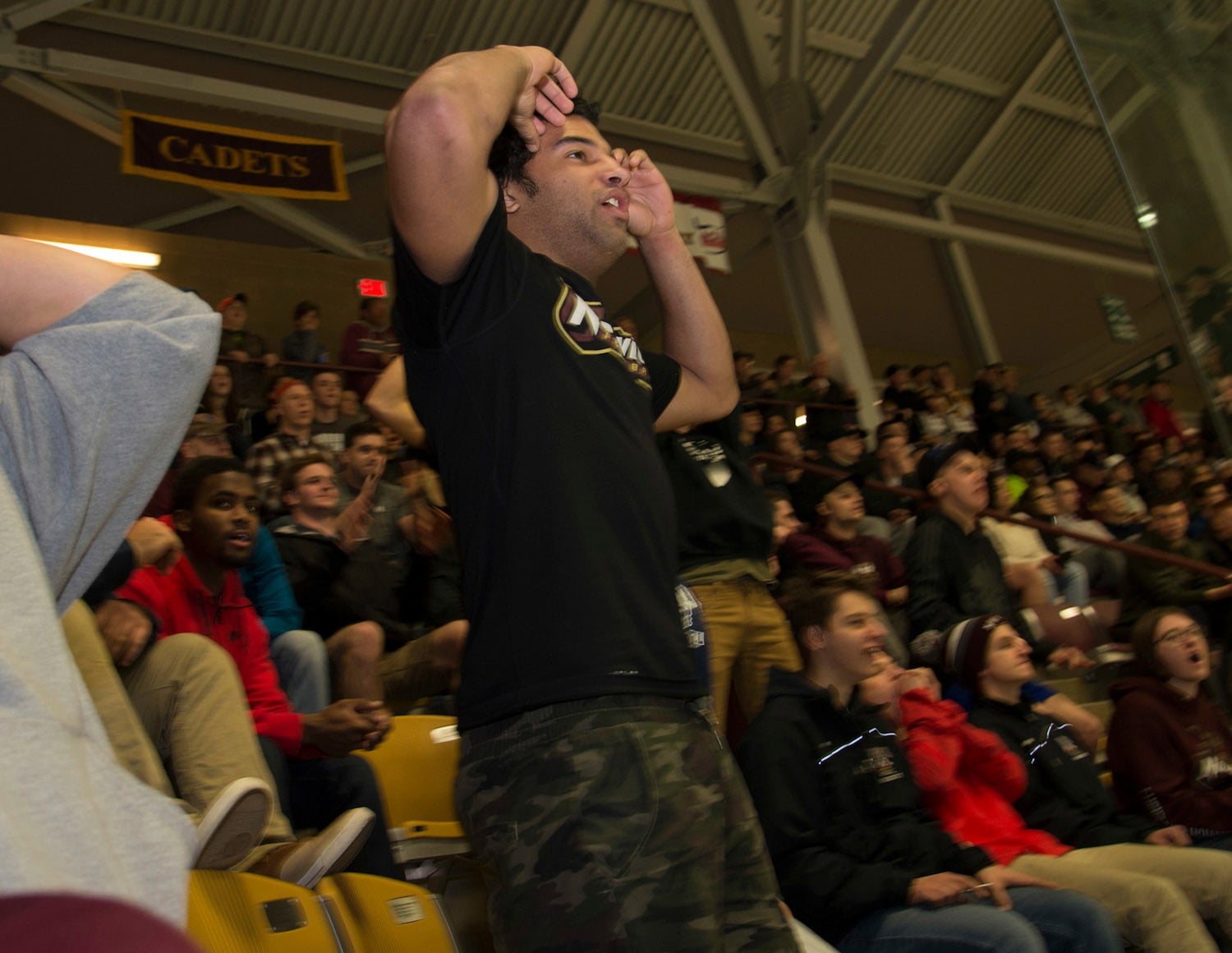 Those Norwich fans at the hockey and basketball games and swim meets? They’re real cards. Cutups. Wait, no. They’re more like cutouts, and they radiate with Cadets spirit.

Although universitywide coronavirus health protocols will keep fans from attending athletic contests in body this spring, thanks to the Blue Line Club, fans can attend by corrugated proxy. Following the lead of several professional sports leagues, Norwich has offered fans the chance to put their faces on cardboard cutouts to go in stands at winter games at Kreitzberg Arena, Goodyear Pool and Andrews Gym.

Paul Morgan, assistant director of Norwich’s Maroon & Gold Athletic Association, said he and swimming coach Jennifer Cournoyer hatched the idea for the cutouts, which cost $60 for single cutouts, $50 when buying two or more and $25 each for students and people 18 and younger. Morgan said fans, including students and alumni, have sent pictures of themselves, their families, and even their pets (dogs so far; sorry, kitties) to “watch” games live. (Norwich plans to livestream home games for flesh-and-blood spectators.)

“With how many people come into Kreitzberg Arena every year and the rabid following of our hockey fans, it felt like good timing,” Morgan said of the fundraiser’s launch. “It’s going to be really fun.”

The cutout ordering deadline was Monday. Morgan said the Blue Line CLub has sold 150 cutouts for hockey games, raising $4,000. The information for the cutouts for other sports is here.

In an email, Karen Swanson wrote that attending Norwich games has become a family passion. She and her husband have collectively attended about 30 of Scott’s Norwich games, many at Kreitzberg. Megan Swanson and Sam Greene, who live near Los Angeles, joined Ron Swanson Sr. and his wife, Marlene, in attending the NCAA Division III Tournament in Stevens Point, Wisconsin, in March 2019. Scott’s brother, Carl and his fiancée, Maggie Zak, who live in Villa Park, Illinois, saw Scott play at Kreitzberg in January 2020.

Karen Swanson said she and Ron had planned to try attending all of Scott’s games this season, home and away, until the pandemic dashed their plans. However, she said, having the grandfathers in the stands will be special.

She said Ron Swanson Sr. watched livestreams of Cadet hockey on his iPad wherever he was. She added that Anderson, who served in World War II and the Korean War in the U.S. Army, proudly wore Norwich University shirts, sweatshirts and hats wherever he went. He’d eagerly await phone calls for scores from the previous night’s games, she said.

“We miss our dads very much and we wanted to honor each of them with a cutout,” Karen Swanson said of her and Ron. “It's our way of being able to have them at Kreitzberg Arena — a place they longed to see — and for them to be able to watch the Cadets in action right from the stands!”

Norwich women’s hockey superfan Roger Franklin, who lives in Putnam, Connecticut, graduated from Norwich in 1960, a time he calls B.C. — before co-eds and computers. He has attended 30 games, too few by his estimation, and watched many more online.

Franklin, who was in the Corps of Cadets and played freshman and varsity men’s basketball at Norwich, said he proudly bought several cutouts. One will have his picture; Morgan will choose photos for the others.

His picture will be on hockey cutout No. 7, the digit on his high school sports jerseys and on a special Norwich jersey he received after donating to a 2012 women’s hockey fundraiser. (He said he’s rooted particularly hard for past Norwich women’s hockey No. 7s, including Kaylee DeBoer and Adelle Murphy.)

“(These cutouts are) great for several reasons,” Franklin wrote in an email. “It is a great fundraiser, a great morale boost for the (team) and coaching staff, plus showing support will instill that ‘Norwich Forever’ pride in current students, current players, the community of Northfield and alums.”

Cournoyer said she’d seen cutout spectators everywhere, not only at games but musical recitals. She said she hopes the stand-in fans will boost spirits.

“I do think for some people it could be a huge lift … to look up in the stands and see a photo representative could bring that extra smile for the day,” she said. “The great thing about this is that it is easy to order and everyone has an opportunity to participate, former coaches, friends from home, it is limitless. I know I have some team parents itching to participate!”

“This allows that relationship (and) connection to rejuvenate,” Ellsworth wrote in an email. “Secondly, there are people who are always asking how to support the team. This is a way for people to support the men’s and women’s players this year. It will be awesome to see so many familiar faces.”

“We haven’t had the conversation yet,” Morgan said. “But we’d like to have the president in the arena.”