In ‘Pandemia’s Black Feather,’ a portrait of power and pathos 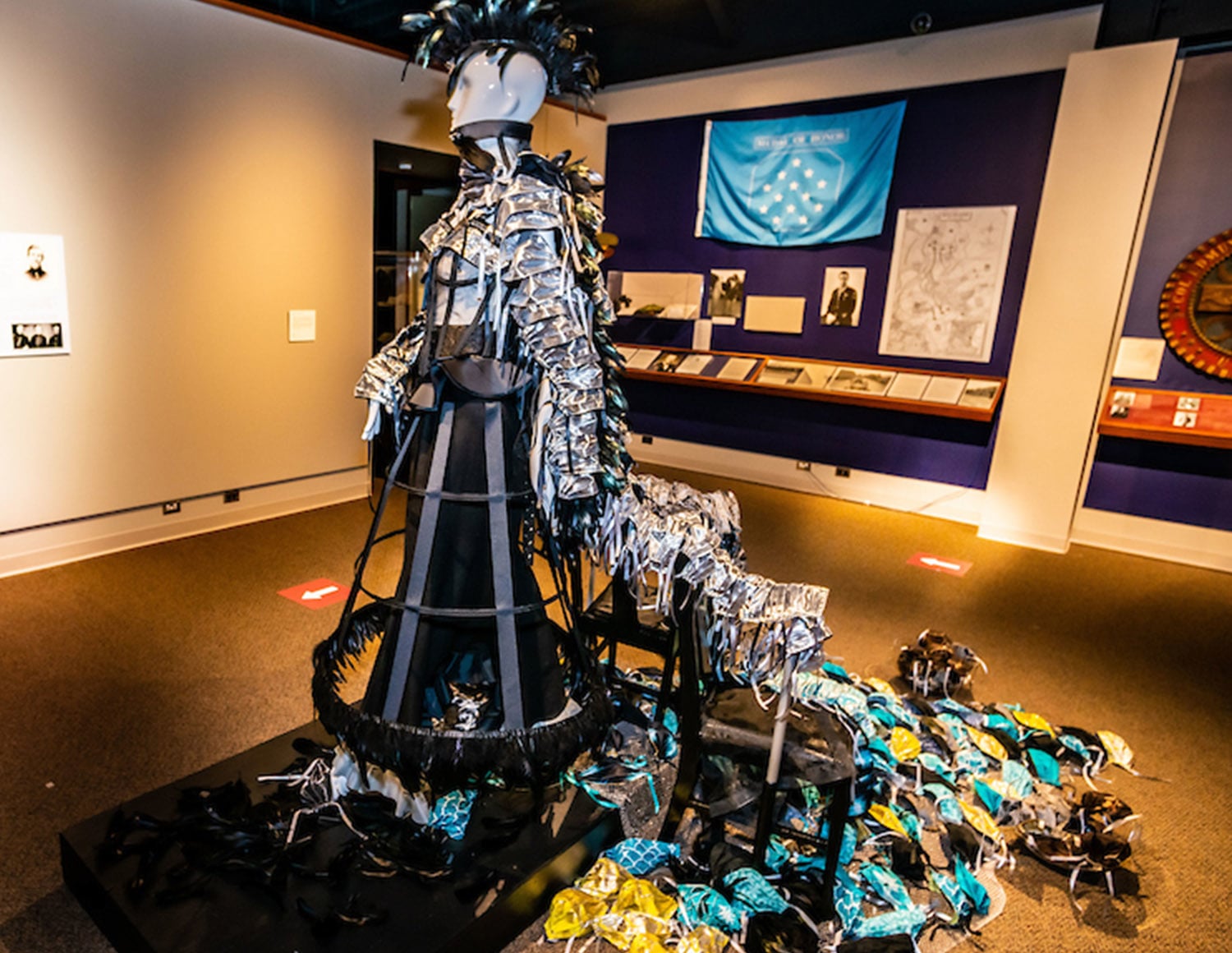 The Irish poet and playwright Oscar Wilde suggested masks set people free — “Man is least himself when he talks in his own person,” he wrote. “Give him a mask, and he will tell you the truth.” Wilde meant masks for concealing, but Samantha R. Talbot-Kelly found truth in masks for healing — the coronavirus pandemic sort.

Talbot-Kelly, a seamstress in Norwich University’s Uniform Store and an adjunct faculty member in the School of Architecture+Art, created “Pandemia’s Black Feather,” an art installation in the Sullivan Museum and History Center.

“I’ll continue adding more and more masks to her, because she is generative.” Samantha R. Talbot-Kelly, creator, ‘Pandemia’s Black Feather’

Pandemia, the installation’s figure, consists of masks in a variety of fabrics, materials and colors (including many blacks and silvers), interspersed with feathers and outfitted on a mannequin. The connected fabrics cascade and sweep around to the floor to form a  fashionable sci-fi couture dress.

“If the pandemic has taught us anything, it has taught us to push the bounds of our creativity,” he said. “We keep coming up with new ways of doing old things, digging deep to find new creative outlets.”

Talbot-Kelly told host Cengeri she alters and sews patches on up to 500 uniforms during a typical academic year at Norwich. Uniform Store manager Gary Pearce said she sews rank insignia on up to 2,600 coats per year, hems 1,500 pairs of trousers, and alters and adjusts uniforms for faculty and staff who wear them. She also prepares commissioning uniforms for graduating cadets with U.S. armed forces contracts.

“She makes the Corps stand proud,” Pearce said. “When the store is open to the public she embraces any sewing project that her industrial machines and her time can handle.”

Talbot-Kelly started making cloth masks in March 2020, when the COVID-19 pandemic began, for Norwich’s Facility Operations staff and the residing international students who couldn’t return home immediately. She also volunteered to increase her mask production at home for friends, family and health centers.

She hasn’t stopped sewing masks for her community, or her installation, since.

Standing on the cusp of change

In her artist’s statement for the Sullivan Museum exhibit, Talbot-Kelly wrote that Pandemia walks between light and darkness, standing on the cusp of change. She told Cengeri the figure, which she worked on for a year, is both abstract and figurative, standing as an allegory of mourning, which she called a state of transformation. Talbot-Kelly likened Pandemia’s dress to a suit of armor; its cape of silver masks flows from the figure’s neck and glows of metallic light.

Although the figure’s garments fall in an undulating wave, Talbot-Kelly said, Pandemia’s strong, static midstride pose suggests movement away from what she trails, and a release of her cape of masks.

Talbot-Kelly was born in Leamington, England, grew up in Toronto and pursued a Bachelor of Fine Arts in Visual Arts at Concordia University in Montreal. She later earned her master’s degree in painting at the University of Texas, San Antonio.

A bio in Kolaj, an international directory of contemporary collage artists, said Talbot-Kelly’s work has traveled nationally and internationally, displaying in art fairs, film festivals, biennials and solo and group exhibitions; one exhibit won an award in Florence, Italy. From December 2015 to January 2016, she had a six-week studio residency in Nelson, British Columbia’s Oxygen Art Centre.

Figures have become central elements in past Talbot-Kelly shows. Her 2013 installation “Blood Queen” features a figure composed of satins, silks, lace, tulle and silkscreened anatomical drawings on organza. The Blood Queen is as red as Pandemia is black.

The “Blood Queen” figure’s animatronic hand opens and closes, inviting visitors to examine her up close. The description of the work on the Saatchi Art webpage said Talbot-Kelly made the work to honor her mother, who died in 2011; the Blood Queen holds Royal Albert teacups containing the ashes of Talbot-Kelly’s mother.

The Oxygen Art Centre webpage describes “Blood Queen” as “Tactile, sensuous and vibrant, this material was used to envelop a standing figure, the artist’s mother, creating what the artist refers to as ‘a mediating layer between emotion and perception … with its rich reds evoking the lifeblood, the queen’s blood, of her mother who in dying joined with a universal life energy.’”

On Feb. 24, Talbot-Kelly and Sullivan Museum and History Center Curator of Exhibits and Collections Katherine Taylor-McBroom will discuss “Pandemia’s Black Feather” in a virtual “Lunch and Learn” session.

Taylor-McBroom said her perception of the installation changed during the year as Talbot-Kelly worked on it. Taylor-McBroom said she was angry at the figure when her stepfather fell ill with COVID-19 and spent two months hospitalized and hovered near death.

“I was suddenly annoyed with her and angry at seeing the representation of the masks because they didn’t do what they were supposed to do — protect my stepfather,” she wrote in an email. “My stepfather recovered and my viewpoint is a little different in regard to the installation, it is a layered representation of pain, suffering, protection, and healing.”

Talbot-Kelly said her installation, which will soon be featured in a Sullivan Museum virtual tour, will keep evolving with a supply of masks ready for the taking when in-person visits resume.

“I’ll continue adding more and more masks to her, because she is generative,” Talbot-Kelly said. “I want her to be able to give a mask to her viewers, a small gesture of service to the community.

Samantha R. Talbot-Kelly’s appearance on WDEV’s “Vermont Viewpoint”; she appears at the 1:06 mark in the show.