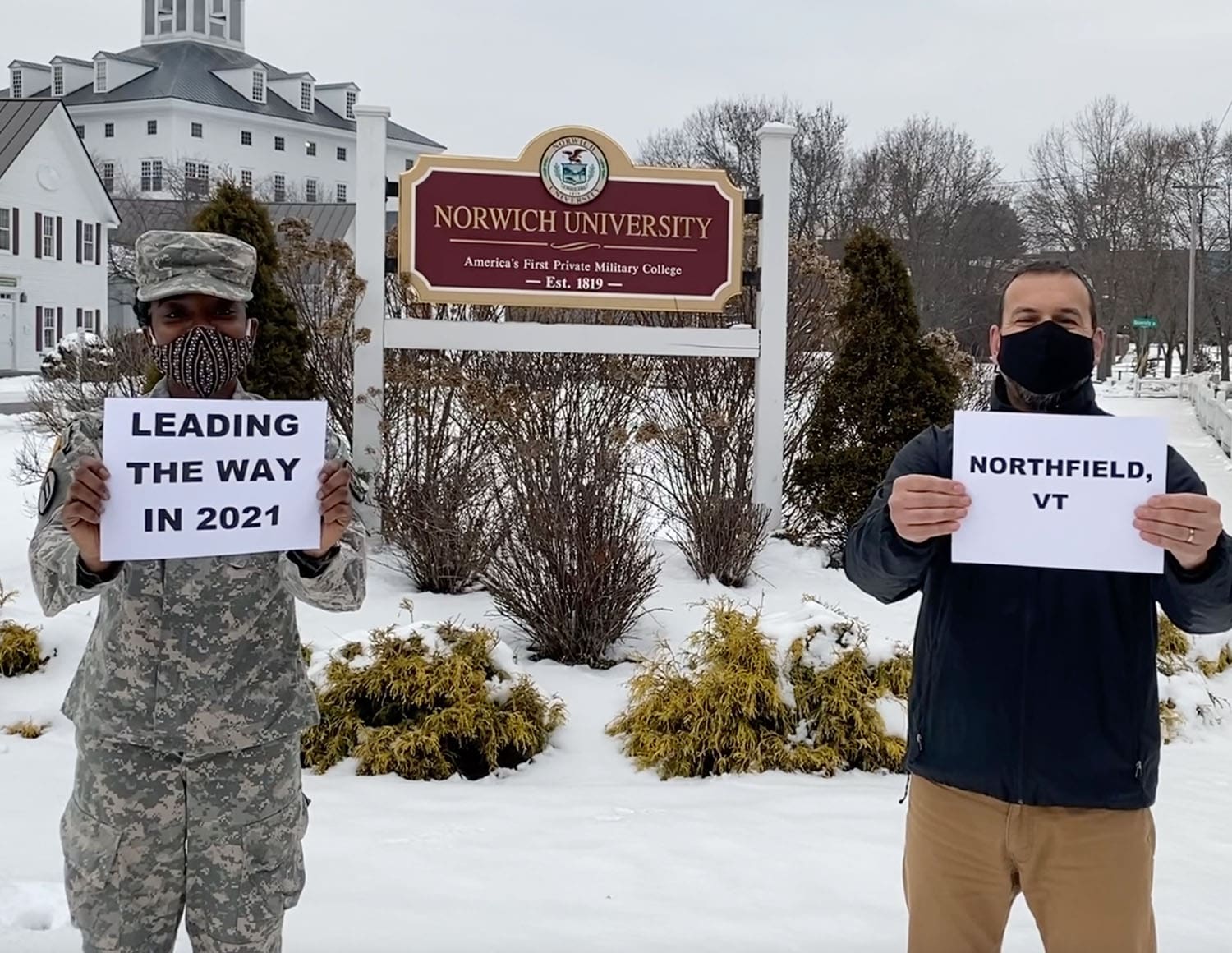 The invite came in a flash; the moment lasted a blink. But Norwich University seized its chance and joined Wednesday’s virtual Parade Across America, which honored Joseph R. Biden Jr.’s presidential inauguration.

Leo Cruz, a 2002 Norwich graduate who has worked as the veterans and military families engagement director for Biden’s campaign and the associate director of coalitions for Biden’s presidential inauguration committee, landed Norwich’s spot.

Ordinarily, a big parade of musicians, color guards and dignitaries would have slow-driven or marched down Pennsylvania Avenue to celebrate the inauguration at the Capitol in Washington, D.C. Norwich’s Regimental Band has participated in many of these inaugurations, including ones for John F. Kennedy (1961), Richard Nixon (1969), Jimmy Carter (1977), George H.W. Bush (1989), George W. Bush (2005), Barack Obama (2013) and Donald Trump (2017). The band would have marched for Ronald Reagan’s 1985 inauguration, but subzero cold forced the parade’s cancellation.

The parade’s film clip submission deadline was noon Jan. 15, when Alumni and Family Director Eddie Habeck would be off campus. He had to shoot immediately and beat nightfall.

This year, the coronavirus pandemic made the celebration mostly virtual. Only the marching bands from the University of Delaware, where Biden earned his bachelor’s degree, and Howard University, where Vice President Kamala Harris earned her bachelor’s degree, performed live near the swearing-in site.

However, as Jon Stewart, the comedian, former “The Daily Show” host and Wednesday’s virtual parade introducer said, a new style of parade was devised to honor Biden, Harris and millions of unsung local heroes.

“(They’re) caring for our loved ones, teaching our kids, keeping us all connected, making us smile,” Stewart said, “reminding us what it is to truly be an American and what is great about America.”

A strong military flavor infused the virtual parade, which featured videos from all 50 states and several territories and began with a performance by the U.S. Coast Guard Band. The band, which was filmed in New London, Connecticut, has performed at every U.S. presidential inauguration since Herbert Hoover’s in 1929.

Other armed forces-connected groups in the parade included the U.S. Marine Corps Silent Drill Platoon, the Massachusetts Veterans of Foreign Wars Honor Guard and a group from the U.S. Naval Air Station in Sigonella, Italy. U.S. Air Force Master Sgt. Cary-Ann Thomas of Joint Base Charleston in South Carolina, who sewed masks for health care workers (including her hospice nurse mother) also appeared, as did representatives of the Tragedy Assistance Program for Survivors, a nonprofit group supporting families and friends grieving the loss of armed forces personnel.

Deploying with the National Guard

Jordan, a 2nd lieutenant in the Guard, graduated from Norwich in 2019 with a criminal justice degree and is said to be the first female infantry officer in Massachusetts National Guard history. Labonte, who graduated in 2018, also with a criminal justice degree, is working toward a master’s degree in homeland security and emergency management at Northeastern University and is a disaster program manager for the American Red Cross.

The armed forces are a major career thread for Cruz, 40, a former Norwich Corps of Cadets member who earned his degree in political science and lives in Alexandria, Virginia. He was a surface warfare officer for the U.S. Navy, serving tours in nations including Bahrain, Spain, France, Italy, Croatia, the United Arab Emirates and Malta. He was also special assistant to the assistant secretary of the U.S. Air Force; defense fellow for the U.S. Army’s deputy undersecretary and the Defense Department’s defense fellow for stability and humanitarian affairs.

Cruz said because Biden reveres the armed forces, Norwich would be a good fit, and a good Vermont representative, in the virtual parade. Biden’s son Beau served in Iraq with the Delaware Army National Guard

“I’ve been in the room with (Biden) before, when he’s said, ‘We have one sacred obligation, and that’s to take care of our troops,’” Cruz said. “That’s not a bumper sticker slogan; it really is who he is.”

The parade’s film clip submission deadline was noon Jan. 15, when Habeck would be off campus. He had to shoot immediately and beat nightfall — it was already 3 p.m. He’d also need a student in military garb, tricky given that students weren’t due en masse for another day.

Lucky for him, Gracious Asantewaa, a sophomore nursing major with a U.S. Army contract, was in the Alumni Office, her work-study job site, awaiting admission to her barracks.

“It was a miracle that she arrived a day early; she was just hanging out downstairs,” Habeck said. “I ran down … and said, ‘Gracious, do you have your (Army combat uniform) available to you?’”

She did, and she put it on. Habeck handed his iPhone to Renee Charbonneau ’18, Norwich’s assistant director of clubs and events, and headed for the Norwich University sign behind Kreitzberg Library for filming. The setting and the snow would surely say Green Mountain State.

“We snuck it in, right before it got dark,” Habeck said.

When Habeck told Asantewaa the video was for the president, she thought he meant Mark C. Anarumo. She was surprised to learn otherwise.

“I wasn’t sure what was going on,” she said Thursday.

“I didn’t see (the parade), I just saw the picture of it and thought it looked very interesting and cool,” she said. “And I was glad to be part of something like this. I thought it was a really great honor.”