Using their outside voices 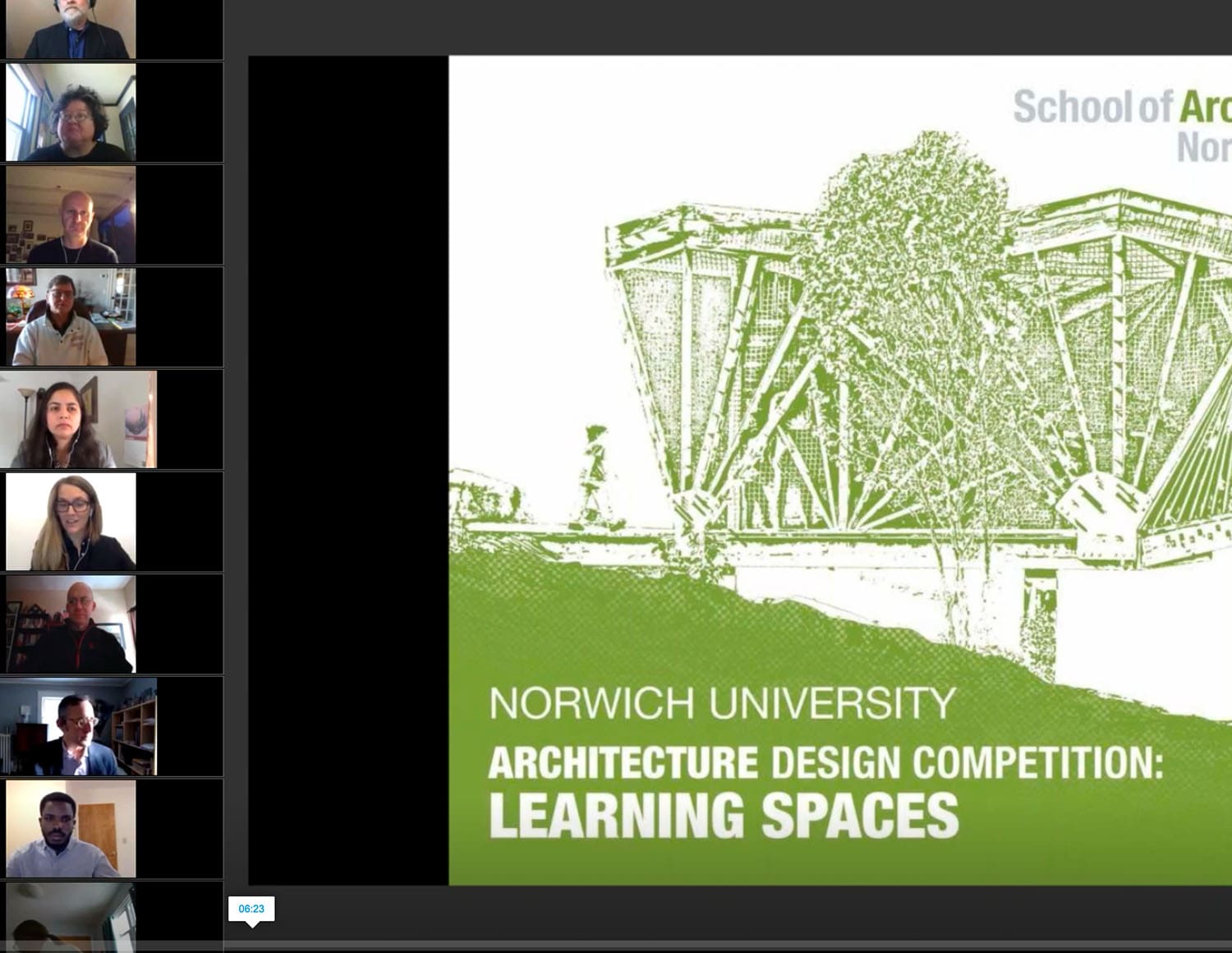 Fifty-seven people from 10 countries on four continents registered for the contest, which ran Nov. 12 through Dec. 13. Forty-two students entered, including students from India, Sri Lanka and Canada. The first-place winner submitted from Poland.

A seven-person jury, including six Norwich faculty and a graduate student from the College of Professional Schools, judged the entries and announced the winners in a Dec. 19 GoToWebinar teleconference.

“Everybody who participated in the contest is involved in learning every day. And, so, not only is this (challenge) something you can relate to intimately, it’s the kind of thing a good designer likes to chew on.”Aron Temkin, dean, College of Professional Schools

Adam Bigas of Silesia, Poland, won the contest. Temkin said Bigas’ design, dubbed “Nature Hub,” stood out starkly, making the selection of winner unanimous and fairly easy. Jurors particularly liked that Bigas’ design was both concept and system, Temkin said, both closed and open, geometry and construction. Bigas seemed to have thought about different places the design could stand and factored in furniture and storage, Temkin added. A hand-drawn comic strip finished the project with whimsy, showing the space used for lessons.

One juror said, “I love the integration of the narrative and conceptualization in building the design. That the structures were not permanent was extremely thoughtful, allowing any space to become and outdoor classroom.”

Another juror said, “Laudable use of multiple modes of explanation, rigor with a sense of humor.”

Bigas described his design as a transformable pavilion that could invite students to go forth to explore nature and then return to for learning. He said he imagined the space furnished with multipurpose cylinders that could fit inside one another for easy storage.

By contest parameters, the classroom-play spaces could be no bigger than 20 feet wide by 20 feet deep by 20 feet tall or exceed a 20 feet tall-by-400-square-foot footprint. The classroom had to be specific to the grounds of a school in the entrant’s or entering team’s locale.

In 2011, after Tropical Storm Irene dropped 11 inches of rain and caused $733 million in damage, Norwich students looked for low-cost ways to restore or rebuild dwellings that were among the 800 homes and businesses the National Oceanic and Atmospheric Administration estimated were wrecked.

Armstrong counted eight low-cost cost-efficiency home designs from students in the School of Architecture+Art and its Design+Build Collaborative since 2011. The most recent were for a pair of LIFT houses in Barre, Vermont, led by Stonorov, Danny Sagan, an associate architecture professor, and Mark Atwood. a civil engineering lecturer. (The most recent LIFT House was sited Dec. 17.)

Norwich Design+Build Collaborative students also designed three outdoor classrooms, including NEST at Union Elementary School in Montpelier that won awards from the New England and Vermont chapters of the American Institute of Architects. Other projects have included a solar-powered geology lab; a mobile classroom and design gallery; and a day camp and classroom building.

“The students come here because they want to make a difference in the world,” Temkin said. “Everybody who participated in the contest is involved in learning every day. And, so not only is this (challenge) something you can relate to intimately, it’s the kind of thing a good designer likes to chew on.”

Parker, who announced the 33 Concept Submission Award winners, said submissions were as diverse as the entrants. Some used handmade drawings; others three-dimensional models or photographs. Some showed architecture relating to surrounding landscapes, architecture, nature or views of either. All showed flexibility, versatility and adaptability of materials.

“It’s an acknowledgment of what’s really involved in putting yourself out there — for criticism, for evaluation of your ideas,” he said. “You think of things, you find ways to represent the ideas and we honor that effort.”