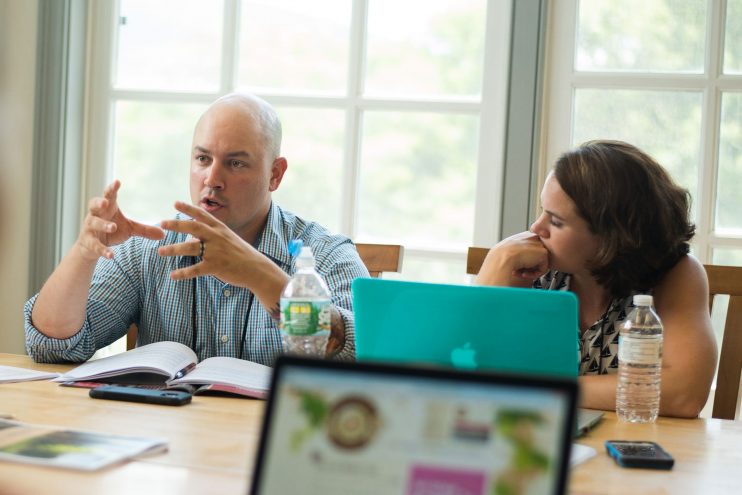 Gustav Nelson’s phonograph records were spread out on purple fabric covering a table in the Sullivan Museum and History Center at Norwich University.

Stamped with the seal of Edison Records, these were heavy relics from the gramophone era; some cracked and warped. Norwich has Nelson’s hand-cranked record player too, as well as sheet music for people who weren’t as lucky to own this technology. With song titles like I Ain't Got Weary Yet; Don’t Cry, Frenchie, Don’t Cry; and So Long, Mother, the sentiments of the era were clear.

“They’re all about war and the pain of being away from home,” said Kate Donley, a Norwich faculty member attempting to bring alive an experience that is a world away from that of most modern students—World War I.

Dozens of students in her English composition and literature class stood around the display tables. They wore latex gloves and were encouraged to pick up items for examination. In addition to the records, there was a World War I Brodie helmet, wool greatcoat and medals of all makes and colors.

These were mementos of an event that touched the lives of everyone, from soldiers to people living thousands of miles from the front lines; many from the private collections of Norwich alumni.

“If you have any allergies, this is very coarse wool, so you don’t want to touch it,” warned museum Director Sarah Henrich, holding up an seam of the greatcoat.

The room grew silent as students began to move about the tables, picking up items and recording their observations on forms. Kyle Singer, a criminal justice major from New Jersey, was interested in the heavy steel helmet.

“It kind of looked like a bullet grazed the side of his head; like the person who wore it escaped death,” he said.

The two classes of students involved in the project, primarily freshmen, were reading A Farewell to Arms, Ernest Hemingway’s 1929 tragic romance set against the Italian campaigns of World War I. As the author’s writing style tends to be dispassionate and spare, Donley explained she uses real artifacts, music and writings from the era to help students fill in some of the historical and cultural context the author has “chipped away.”

“What I’m trying to do is go deeply into these works by studying the historical period,” she said. “What I’m really interested in is motivating students to do high-quality research work.”

To make the experience even more powerful, she drew on museum and archive records of three people associated with Norwich University, the country’s oldest private military college. She described them as ordinary people whose lives were affected deeply by the war.

Gustav "Gus" Nelson entered Norwich as a student in 1915, but his education was interrupted by the call to serve. He did not graduate until 1924. Nelson left the military as an officer and became a popular student, serving as class president.

Leona T. Harmon was the wife of Ernest Harmon, whom she met while he was a cadet at West Point and married in 1917 as a newly appointed 2nd lieutenant. She went from a sheltered existence to a succession of military housing situations and the isolation of a pregnant army wife while he fought overseas. Ernest had a successful military career and served as Norwich's president from 1950 to 1965.

DuVal Allen left Norwich University six months before the U.S. joined the conflict to serve in the French ambulance corps—much like Farewell’s lead character Frederic. Highly decorated as a soldier, Allen never seemed to advance in the military and may have lost rank on a least one occasion.

“He’s done the most and he was a private; the lowest rank,” said Kevin Hicks, a history major, referring to Allen. “I think there is more to this guy.”

Hicks scrutinized the highly detailed map that appeared to show the locations where Allen served with the French Ambulance Corps, trying to find the German lines. The students had moved on to Norwich’s Archives & Special Collections, where they poured over maps, scrapbooks, military records and written accounts from all three people.

“This is just an interesting map,” said Hicks. “I don't know if [Allen] made it, but I assume he did because his name is on it.”

Donley's students had already read extensive memoirs on all three people before sitting down to examine the documents. With the archivists’ help, they were able to dig up additional details about the subjects’ lives and facts about the way people lived in 1917. Students moved from table to table discussing dance cards, the present-day value of the $33 monthly paycheck of a typical soldier and a time when football games were allowed on Norwich’s Upper Parade Ground—unthinkable today.

Courtney Wagner was particularly struck by the penmanship.

“People seemed to think that someone may look at this one day, so they made it look nice,” she said.

Nelson, in particular, left a trove of documents. A prodigious writer, he sent missives to Norwich’s Reveille magazine, with titles like “Helping the Hun Home.” These apparently came straight from the trenches.

“The men manned the guns with a coolness that was wonderful while around them enemy machine gun bullets sang their stinging whiplash song and shells burst with crashes that were terrific,” he wrote.

Leona Harmon serves as a particularly interesting contrast to a character in the novel—the liberated, passionate Catherine—according to Donley. In Leona’s personal memoir, she often paints herself as an insecure woman living very much in the shadow of her husband.

“I was so innocent, ignorant, unsophisticated, ill-prepared and shy that life was difficult. Ernest was an ARMY OFFICER with all the conceit, bad habits and arrogance of which I knew nothing,” Leona wrote. “He was probably ashamed of me in everything I did and didn’t know but never tried to help in any way.”

Real and personal accounts of life push students beyond stereotypes of war and people of the era, said Donley. She believes students can relate to Frederic and Catherine as young people, in love and caught up in events of enormous size and complexity. This was why she selected A Farewell to Arms.

Reading their words and holding the possessions of people from the same era in their hands deepens this connection.

“Hemingway’s complex style, subject matter, and ambiguity provide ample room for analysis and research, especially using Norwich’s unique resources in the museum and archives,” said Donley. “The archival texts provided one other way for the students to connect to the subject matter of WWI—students could connect to Gus Nelson and duVal Allen as fellow Norwich students, similar to themselves.”