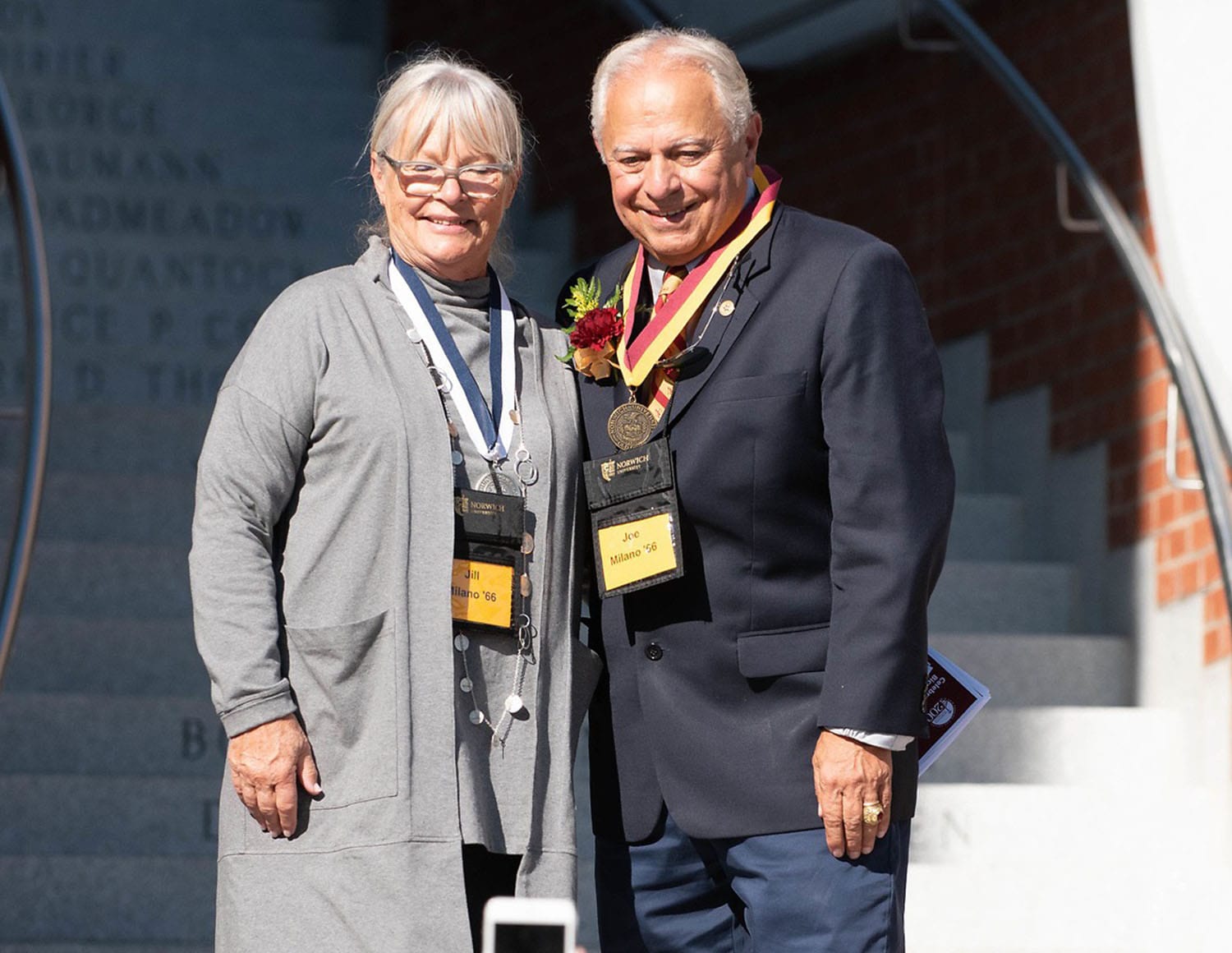 Joe Milano thought the email from the World Culinary Awards might be spam. He might have missed a milestone chance.

The 1966 Norwich graduate, 2003 honorary degree recipient, former board of trustees vice chairman and owner of the historic Union Oyster House in Boston, said his inbox groans with new messages every day, some with seemingly dubious intent.

This World Culinary Awards message, which came Dec. 18, said his Union Oyster House, established in 1826, had been nominated as North America’s Best Landmark Restaurant, 2020. Milano, for whom the campus’s Milano Ballroom is named, was intrigued.

“So, I get this (message) and I read it, and I found it very fascinating,” Milano said.

“We were extremely honored, the entire restaurant and certainly myself.” Joe Milano ’66, Union Oyster House owner

“He called me back and said, ‘Joe, they do exist, and they seem to be what they claim to be,’” said Milano, who lives in Lynnfield, Massachusetts. “We were extremely honored, the entire restaurant and certainly myself.”

Travel professionals and other organizations could vote for the winners starting Dec. 26. Then, on Dec. 30, by cellphone call, Milano learned he’d won. He was invited to a virtual awards ceremony a day later, which was broadcast over Zoom from the Hyatt in Dubai, United Arab Emirates.

The Union Oyster House, which stands a block from Faneuil Hall on Boston’s Freedom Trail, is the oldest continually operating restaurant in the United States. It topped a dozen restaurants, six from Canada, to win Best Landmark Restaurant.

The World Culinary Awards, announced Dec. 31, are a sister program to the 27-year-old World Travel Awards, led by a same-named group headquartered in London, and were awarded by continent and country.

Before his restaurateuring career started in Salem, Massachusetts, in 1970, Milano attended Norwich University, graduated with a biology degree, and commissioned into the U.S. Army. He became brigadier general as he served in Vietnam.

Milano has kept his strong ties to Norwich, hosting many NU Club of Boston gatherings at his restaurant and funding the Joseph Milano Merit Scholarship, established in 1982. The scholarship goes preferentially to graduates of St. John’s Preparatory School of Danvers, Massachusetts, and Massachusetts high school students who demonstrate financial need.

A gift from Milano and his wife, Jill Kirkpatrick Milano, Vermont College Class of 1966, helped fund the ballroom bearing their name, which was dedicated in 1989. Milano also has a step on the Bicentennial Stairs, unveiled during the 2019 bicentennial Homecoming.

The World Culinary Awards was a second 2020 star turn for the Union Oyster House. On Oct. 26, a crew from Lionsgate and HBO Max filmed scenes for a new movie about Julia Child, star of the famous Public Broadcasting Service program “The French Chef,” filmed by then-Allston, Massachusetts-based WGBH-TV. Sarah Lancashire, who starred in BBC One and PBS’ “Last Tango in Halifax,” plays Child.

Lionsgate’s 100-person crew, Milano and two Milano lieutenants, were tested for COVID-19 the day before, the day of and the day after the shoot. On his website, Boston photojournalist Bill Brett reported that two Lionsgate crew members stayed overnight inside the restaurant.

Child, who died in 2004, lived for many years in Cambridge, Massachusetts, and frequented the restaurant’s oyster bar.

As The Boston Globe reported, Milano began learning the restaurant business in 1970, when he bought a Pewter Pot franchise and ran it for a year. In 1971, the Globe reported, Milano’s father, Joseph Sr., an engineer who’d bought a liquor store in Boston’s North End, bought a stake in the Union Oyster House. Three years later, the Milano family became the Union Oyster House’s sole owners, and bought its real estate in 1981.

The Union Oyster House’s awards list is long and stellar; it includes the 2019 Open Table Diner’s Choice Award, a spot on the 2018 Lonely Planet’s 500 Best Restaurants in the World and the 2014 American Culinary Federation Achievement of Excellence Award. Milano said though he’s been promised a video file of the World Culinary ceremony, there will be no trophy, just a certificate.

So, he’s having his own plaque made, featuring logos from the World Culinary Awards and his restaurant. He’s selected a spot to hang it — right next to the plaque marking the restaurant’s May 27, 2003, listing as a National Historic Landmark.

“I never won anything that said ‘North America’ before … or anything beyond our borders,” Milano said. “I can’t think of a better place to put (the plaque). It’ll look nice.”