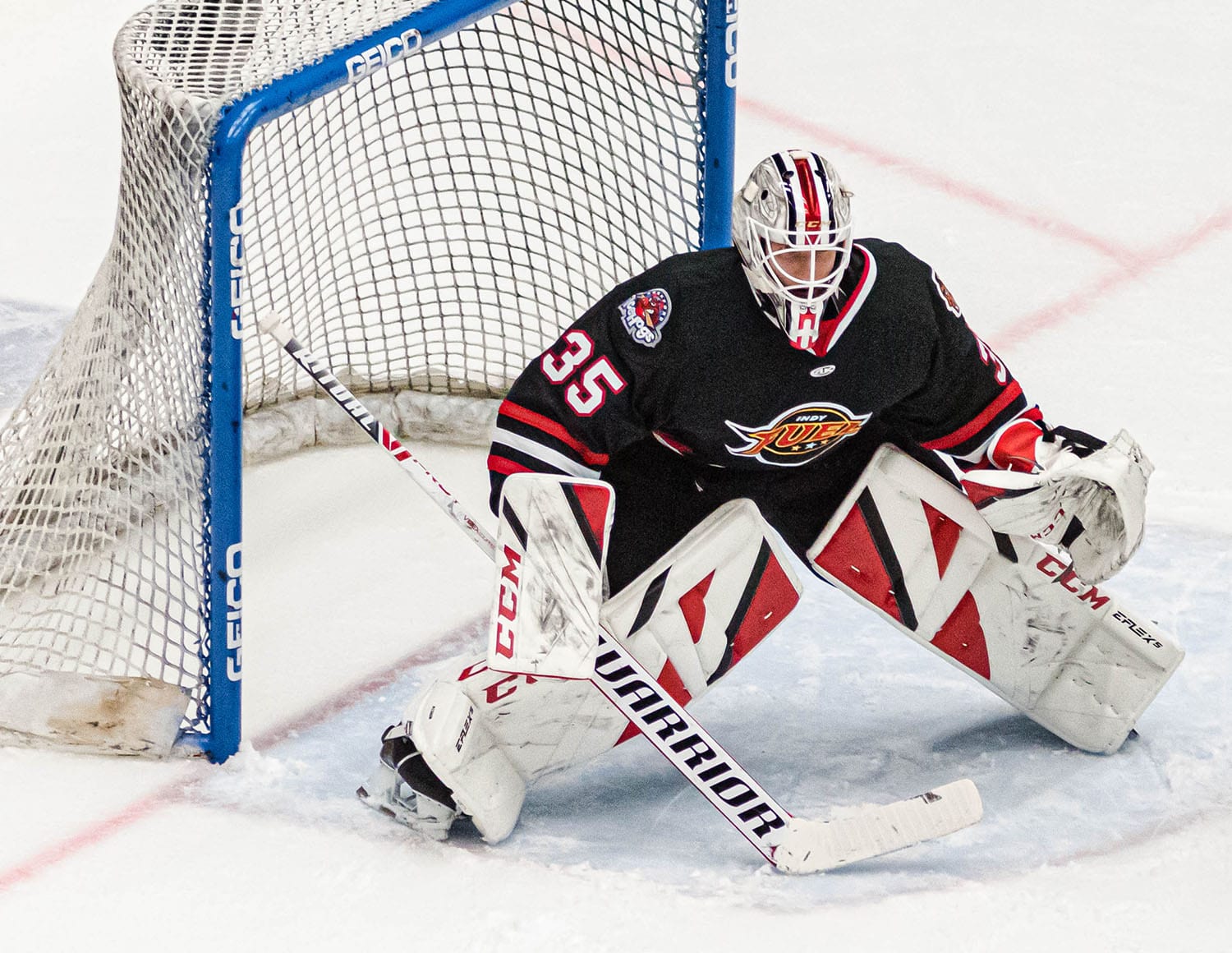 Aubrun, a goalie who in his senior year at Norwich earned the 2020 Sid Watson Award as the nation’s best Division III men’s ice hockey player, played his first games with the ECHL’s Indy Fuel.

Aubrun, a 25-year-old Chamonix-Mont-Blanc, France, native, signed a two-year deal with the American Hockey League’s Rockford IceHogs in April. On Dec. 15, he was assigned to the ECHL’s Indy Fuel.

The IceHogs and the Fuel are affiliates of the National Hockey League’s Chicago Blackhawks.

Through Monday, Aubrun has a 1-1 record, has faced 67 shots, has allowed seven goals and has a 3.52 goals against average and a .896 save percentage.

On Dec. 27, Aubrun won his Fuel debut, a 4-3  win on the road over the Wheeling Nailers at Wesbanco Arena in Wheeling, West Virginia. He stopped 36 shots.

On New Year’s Eve, Aubrun stopped 28 shots in a 4-3 loss to the Nailers, also in Wheeling.

Through Monday, Aubrun has a 1-1 record, has faced 67 shots, has allowed seven goals and has a 3.52 goals against average and a .896 save percentage. The Fuel are off to a 6-1 record and an .857 winning percentage, the best in the 13-team ECHL through Monday.

The Fuel next host the Greenville Swamp Rabbits on Friday.

Aubrun, a two-time New England Hockey Conference Player and Goaltender of the Year, was the third Norwich University men’s ice hockey player to win the Sid Watson Award in its 28-year history.

Aubrun joined Keith Aucoin ’01 and Kurtis McLean ’05 as Watson Award winners from Norwich. McLean and Aucoin went on to play in the National Hockey League and have long professional careers. Aubrun was the third player in Norwich University men’s ice hockey history to sign an AHL deal immediately after finishing his collegiate career. He joins William Pelletier ’17, who also signed with Rockford and had a three-year pro career, and Frank Simonetti ’84, who signed with the Providence Bruins.

“Tom had one of the best seasons I have ever seen a goaltender have at any level,” Norwich University Head Coach Cam Ellsworth said after Norwich’s 2019-20 season. “His play was strong and consistent all year and deserving of this opportunity. … Tom is a first-class person and athlete and I look forward to watching him grow in professional hockey.”

Aubrun is scheduled to be the guest on the next episode of the “Reveille” podcast, produced by Norwich University Athletics and hosted by Multimedia Specialist Tanner Acebo. Find the “Reveille” SoundCloud channel here.