2020 in review: The year in athletics 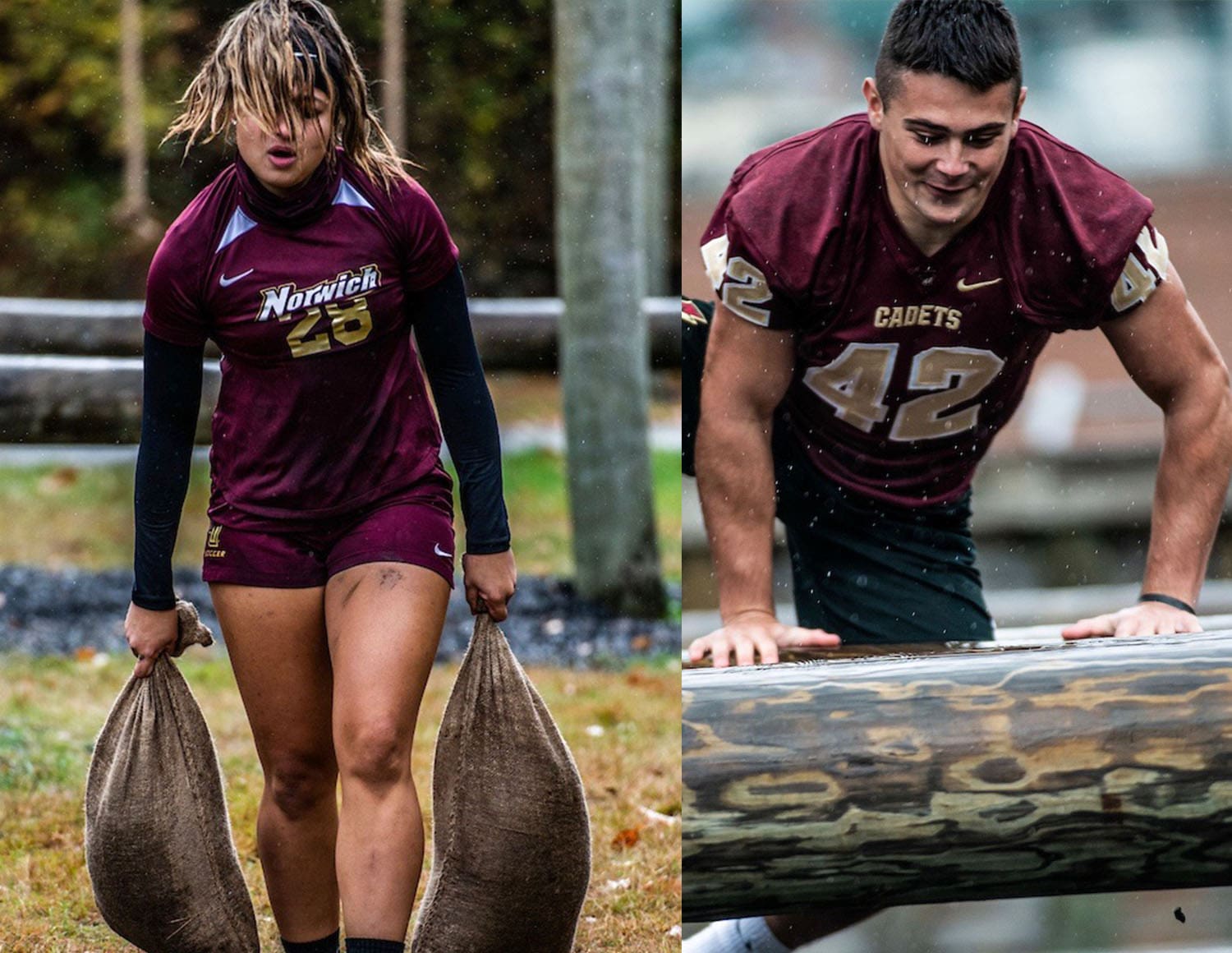 The year 2020 will go down as one of the strangest years in Norwich University’s 100-year-plus varsity athletic history. From the men’s and women’s hockey teams losing out on the chance to compete for national championships, the spring sports season being called off shortly after it started, to the entire first-semester schedule for fall and winter sports being wiped out, it was a far different year than anyone could have anticipated.

Here’s a chronological list of some of 2020’s top athletic achievements:

The women rallied from a 2-1 deficit midway through the second period to score eight straight goals and defeat Suffolk University 9-2 for their fourth straight NEHC Tournament title and 10th overall. Amanda Conway ’20 was named the NEHC Tournament MVP for the second time in her career; Julia Masotta ’23, Ann-Frederique Guay ’23, Alexa Berg ’22 and Samantha Benoit ’21 were named to the All-Tournament team for the Cadets.

The men followed later that night with 3-0 shutout of Hobart College to win their record 14th NEHC Tournament title. Jordan Hall ’20 scored twice, while Tom Aubrun ’20 stopped all 29 shots he faced to record his ninth consecutive shutout and set an NCAA record with 13 shutouts in a single season.

Gabriel Chicoine ’21, Brett Ouderkirk ’22, and Hall were named to the NEHC All-Tournament team; Aubrun was named the NEHC Tournament MVP for the second year in a row.

Both the Norwich University baseball and softball teams completed their spring break trips right before the remainder of the spring season was cancelled because of the coronavirus pandemic.

The softball team went 6-2 in its spring break trip to Myrtle Beach, South Carolina. The Cadets capped their final game March 13 with a 9-1 walk-off win over Iowa Wesleyan. The start was the program’s best since 2003.

Conway was the second Norwich women's ice hockey player to win the Hurd Award in its 21-year history. Julie Fortier ’12 was the only other recipient in 2012 after she concluded her career as Norwich’s then-all-time leading scorer.

Conway broke nearly all of Fortier’s scoring records in her remarkable four-year career in the Maroon & Gold.

Ellsworth’s first-time win marks a record seventh time a Norwich University men’s ice hockey coach has received the Edward Jeremiah Award, which is named in honor of the great Dartmouth College head coach and was first presented in 1970.

Read the story and see the video here.

Aubrun is the third Norwich University men's ice hockey player to win the Sid Watson Award in its 28-year history. He joins Keith Aucoin ’01 and Kurtis McLean ’05 as previous NU winners. Aucoin and McLean went on to play in the National Hockey League and enjoy long professional careers.

The only two men’s hockey programs with more Sid Watson award winners are St. Norbert and Middlebury, each with four.

Aubrun authored one of the most historic seasons in NCAA hockey history as he backstopped the Cadets to their 14th NEHC Tournament title and the No. 1 ranking in the USCHO.com national rankings before the season ended abruptly because of COVID-19 public health safety. He also earned USCHO National Player of the Year honors.

Read the story and see the video here.

Norwich University’s Athletic Communications department launched its official podcast May 4. The podcast, hosted by the voice of Norwich athletics, Tanner Acebo, is named “Reveille” (pronounced REV-il-lee) after the early morning bugle call signaling the first military formation of the day.

“Reveille” has so far featured 18 episodes, earning more than 4,500 listens from across the country and around the world. Norwich University President Mark C. Anarumo is the most recent guest; with two appearances, he is the first recurring “Reveille’ guest.

Bracy will wear No. 31 with the LIzards, the same jersey number he wore during a phenomenal four-year career with the Maroon & Gold. He will be one of three players on the roster hailing from an NCAA Division III program, joining teammates Joey Panariello (State University of New York, Cortland) and Rock Stewart (Williams College).

Bracy, one of the greatest faceoff specialists in Norwich men’s lacrosse history, returns to the MLL after appearing in one game for the Ohio Machine in 2018.

Norwich University’s eight fall varsity athletic teams competed in the inaugural Grit Games on Oct. 3 as part of “From the Hill to Your Home” virtual Homecoming 2020.

The Grit Games were created with help from Norwich University’s Semper Fidelis Society and took place on the U.S. Marine Corps Obstacle Course near the Vermont National Guard building on campus.

The men’s rugby team dominated the team competition, sweeping the top three times for the lowest possible team score of six. The women’s soccer team edged out the women’s rugby team by one point with 12 points to 13 to claim the women's team title.

See the story and video here.

Norwich sophomore Nikky Ansley shattered a 32-year-old school record in a virtual meet for the 50-meter breaststroke with a 25.76, besting Lynn Kucera’s time of 26.68 from 1988.

Ansley’s time was the sixth-fastest time in the country across Division I, II and III that week. She ranked 17th in all of NCAA Division III in the 50 breaststroke on the season at the time.

Ansley, who’s from Berlin, Germany, was the highest-ranking rookie and second overall highest individual scorer at the 2020 Great Northeast Athletic Conference Championship. She took first place in 50-yard freestyle 24.91 and 50-yard butterfly 26.75, which also set a GNAC record. Ansley completed her individual events by taking second in the 100-yard freestyle 55.23. Ansley earned GNAC Rookie of the Week honors three times this season and was twice named the New England Intercollegiate Swimming and Diving Association Swimmer of the Week.

During the five-day campaign, which concluded Nov. 6, 903 donors gave $64,849 that will go directly to each team’s fundraising account and support student-athletes’ quest for success. The total donor count nearly doubled the goal of 500; the money-raised total set a Maroon & Gold challenge record, topping the $50,881 raised a year ago.

This year’s campaign exceeded the 722 donors and $47,502 raised during the inaugural challenge in 2018. In total, the Maroon & Gold Challenge has raised over $160,000 in support of Norwich University student-athletes the last three years.

For the third consecutive year, the men’s lacrosse team generated the most donors and the most money — 207 donors gave $12,189. The money will go toward purchasing new biometric feedback equipment.

Sixteen of Norwich’s 20 varsity athletic programs raised more than $1,000. Twelve reached the individual sport goal of having 25 donors each; three more had 24 donors each.