2020 in review: Highlights from the newsfeed 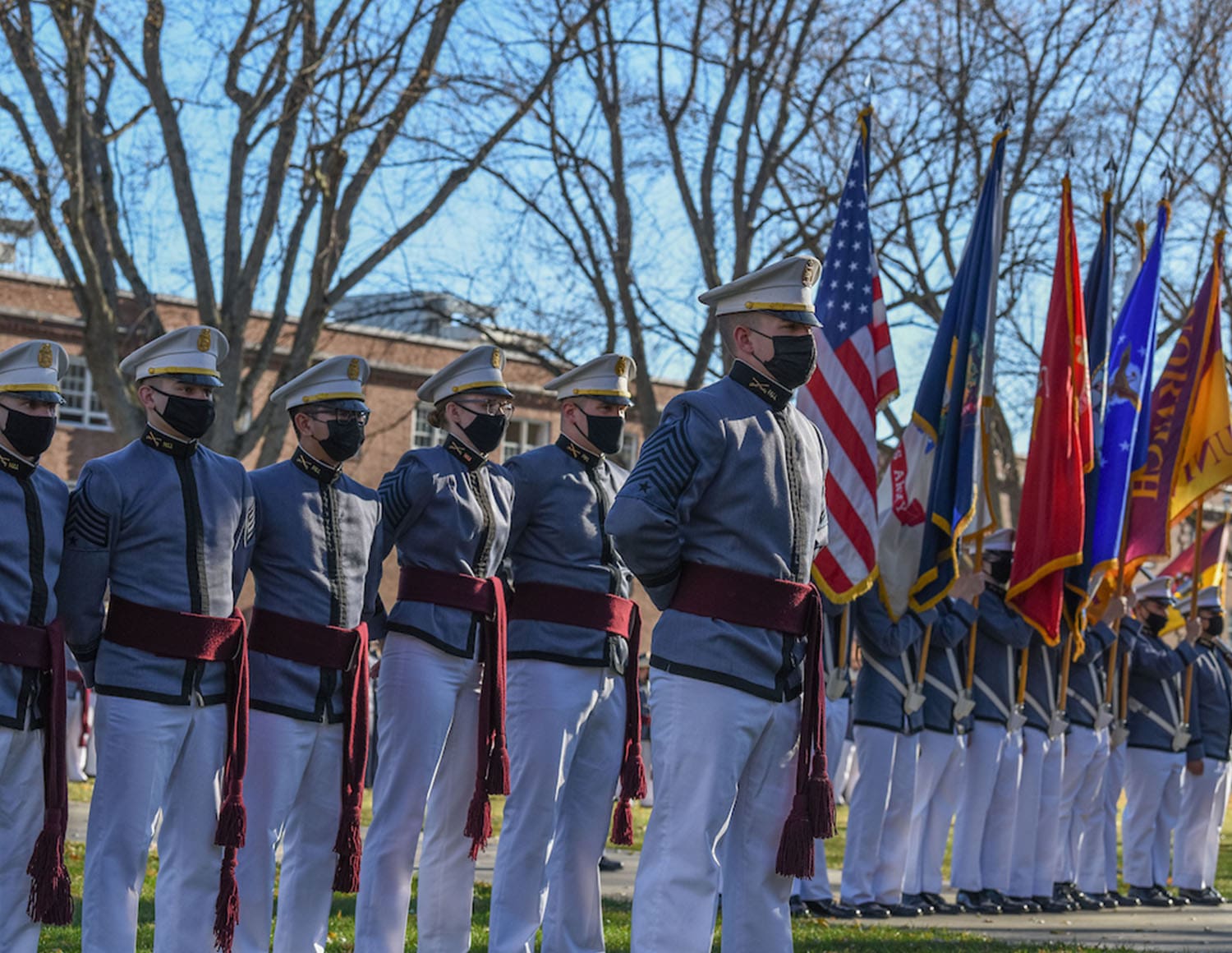 It’s impossible to say “2020” without adding “coronavirus,” but with grit and focus, Norwich’s community persevered. As we talk through our masks and measure off safe 6-foot distances, we can look back on a busy year in which we adjusted, showed resilience and succeeded.

With a quick March pivot, classes switched from in-person to online to finish the spring 2020 semester. In May, Richard W. Schneider headed off campus after 28 years as president and Mark C. Anarumo arrived to take the reins.

During a summer of intensive planning, Norwich’s community galvanized. The facilities operations team sprayed, scoured and added plexiglass barriers and other structures, to keep classrooms and labs safe before students arrived for the fall semester in phases. Faculty mastered new lesson delivery, webcasting classes for in-person and remote engagement.

No one story can capture everything that happened in 2020, but below are the most-clicked-on stories from norwich.edu’s newsfeed.

Army Sgt. 1st Class Rick Badem, chief of the U.S. Army’s Barre Recruiting Station, made it his mission to get scholarships, particularly the Minuteman Scholarship, to more Vermont recruits. In just a year, he helped boost the number of Norwich students backed by the scholarship from one to 10. (He also helped boost the size of the 75th Innovation Command’s Boston City Group Detachment on Norwich’s campus from three cadets in spring 2019 to 16 in early 2020.)

In a February ceremony in Jackman Hall’s foyer, the Army awarded Badem a commendation medal for his work.

The Minuteman Scholarship, introduced in 2015, pays full (uncapped) tuition and fees or $10,000 toward room and board at any college or university served by an Army Reserve Officers’ Training Corps program. It comes in one-, two-, three- and four-year varieties and will pay the full tuition and fees at Norwich. Then, Norwich’s ID White Scholarship covers the room and board.

“The young men and women who join the Army Reserve and get Minuteman Scholarships, they come to Norwich and walk out pretty much debt-free, which is really awesome,” said Henry Collier, a U.S. Army Reserve cyberwarrant officer and commander of the 75th Innovation Command’s detachment at Norwich.

Sem said alumni, particularly Meghan Kennedy ’12, a member of Norwich’s Board of Fellows and a supervisor in U.S. Customs and Border Patrol, helped arrange the itinerary.

“You can’t teach what they’re going to learn (in Washington), you just can’t teach that in a classroom,” Sem said. “You can teach concepts in leadership, you can teach strategies, but you really don’t know the type of leader you’re going to become, or you are, until you’re in a situation in which you actually have to deploy those tactics.”

8. The (scientific) method amid the coronavirus madness

As part of the Perspectives Project, a 29-part COVID-19-focused essay series by Norwich University faculty, Dr. Page Spiess, a chemistry lecturer, described researchers’ work to unlock the novel coronavirus’s mysteries and move toward a vaccine. (With several vaccines now Food and Drug Administration-approved, boosted by Operation Warp Speed in the United States, it seems the work has paid off.)

“One of the key concepts I frequently attempt to impart to students is that science cannot be performed in a vacuum,” she wrote.

Spiess described collaborating with her department colleagues and support from college deans and President Mark C. Anarumo and President Emeritus Richard W. Schneider as they switched to online teaching and continued coronavirus research.

Read the story here. See the Perspectives Project and other COVID-19 coverage here.

With resplendent Norwich grit, the Corps of Cadets and its rook class arrived on campus ready to train adjusted for COVID-19.

Col. Michael Titus, the Corps’ commandant, Col. Matthew Smith, the College of National Service’s dean and Frank Vanecek, Norwich’s senior vice president of student affairs and technology, worked for months to ensure training would be safe and, as ever, rigorous.

“Masks are part of the uniform now,” Smith said in August. “In a heartbeat, you could go from a large spaced-out formation to a tighter formation or maybe have to go inside … you want to make sure you’re prepared.”

Some traditional activities, including the Dog River Run, involved smaller groups, which Vanecek likened to family units, rather than a full platoon. The small-group approach also applied to briefings; there would be no en masse Mack Hall gatherings this fall.

6. Honk and wave if you love President Schneider

In May, Richard W. Schneider, Norwich’s now-president emeritus and longtime participant in Norwich parades, watched a parade in his honor.

Cars entered Norwich’s campus from the south end and lined up along Power Plant Road before heading up Jackman Hill and entering the Upper Parade Ground. Schneider, his wife, Jaime and their dogs watched from Jackman Hall’s steps.

“All I want to do is be able to say goodbye to him with all the pomp and circumstance he truly deserves,”  Sutton-Bosley said.

The program, which ran June 30 through Aug. 7, had students researching Earth system processes, such as air quality, forest ecology, ocean biology and atmospheric chemistry. Although the plan had been to have the students researching aboard flying science laboratories, such as DC-8, P-3B, C-23, UC-12B and ER-2 aircraft, COVID-19 shifted plans online. Project Manager Emily Schaller said students received canisters to sample air at home, partly to see whether its quality had improved with car traffic and exhaust lessened because of COVID-19.

Carlson, a Corps of Cadets member who hopes for a California Air National Guard pilot contract, said his aviation passion has family roots. As a boy, he would attend air shows with his grandfather, a former bomber pilot, who would point out jets he used to fly.

“That was imprinted on me and never left,” Carlson said. “Even just being close to an airport and seeing jets pass overhead reminds me of my goal every day, and it’s something I can’t see my life without.”

4. For a group of nursing students, a set of special pins

3. For study-abroad students, a global transforming

In February, Norwich celebrated having sent a record 95 students abroad and away in fall 2019, some in Norwich Expeditions to China, France (through the European Union NATO program) or Germany (through CityLab:Berlin). Many returning-from-abroad students gathered for a dinner of barbecued pork and chicken with baked beans and peach cobbler — quintessentially American food — at Plumley Armory.

At the dinner, Tom Blood, Norwich’s assistant director of education abroad, and a pair from the Corps of Cadets and the Class of 2020, Olivia Bloom and Mason Gregg, shared travel tales.

Gregg, who majored in cybersecurity, described the international platoon, a Corps of Cadets section created in spring 2019 to promote abroad study. Bloom, a neuroscience major now in the U.S. Marine Corps full time, traveled abroad twice during her Norwich years, to Chengdu, China, in 2017 and Cusco, Peru, in 2018.

Bloom invited attendees to shake hands with unfamiliar people at their tables, a simple gesture that can start relationships and spark learning.

“I think of studying abroad kind of like a conversation,” Bloom said. “You can think about starting one or you can go for it and see how it turns out. And the outcomes may be beautiful.”

James C. “Jack” Abare, a Norwich Class of 1957 alumnus and decadeslong Norwich advocate whose fall cookouts became a cherished rite for the Corps of Cadets’ rooks, died Feb. 29 at age 86.

Abare earned a Bachelor of Science in business at Norwich and was chapter historian of Sigma Phi Epsilon and a member of the drill team and Newman Club. He was father to David Abare ’87, cousin to Ronald Celentano ’83, and uncle to Joseph Wright ’96.

After graduating from Norwich, Abare commissioned into the U.S. Army and went to the Armor School at Fort Knox in Kentucky. He later served nine years in the U.S. Army Reserve. Along the way, Jack married Lona St. Cyr, his high school sweetheart; they lived for most of their married life in Boxford, Massachusetts.

Abare served on Norwich’s Board of Trustees, Board of Fellows and boards of directors for the Norwich Alumni Association and the Partridge Society. For his many contributions to Norwich, Abare received the Board of Fellows Medallion in 1994, the Norwich University Alumni Association Distinguished Alumnus Award in 1981. The Abare Dining Hall in Wise Campus Center is named for him. In fall 2019, Abare was one of 78 people honored with a step on the Bicentennial Stairs.

Anarumo, who was chosen from among 48 applicants and four finalists, would on June 1 succeed Richard W. Schneider, who spent 28 years as Norwich’s 23rd president.

Anarumo came to Norwich from the U.S. Air Force Academy in Colorado Springs, Colorado, where he served as the Center for Character and Leadership Development’s director and permanent professor. His previous assignment was vice commander of the 39th Air Base Wing at Incirlik Air Base, Turkey, where he oversaw about 5,000 U.S. military, civilian and contractor personnel.

“Col. Anarumo emerged as the most capable candidate for this position,” Board of Trustees Chairman DeForest said. “We are confident that we have selected an exceptional individual who will inspire our 200-year-old university to reach even greater levels of excellence.”