Santas and soldiers and deer, oh my 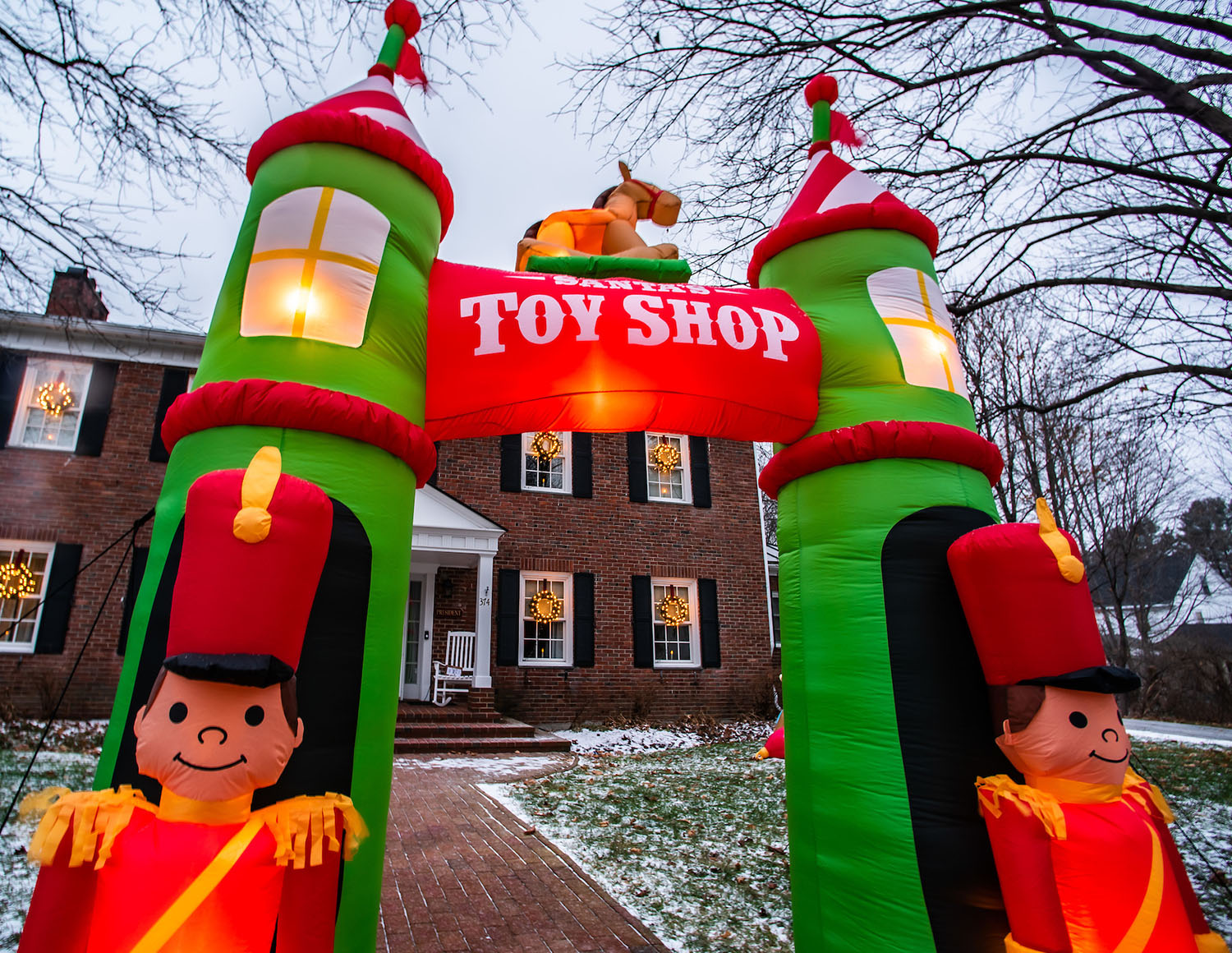 And what to our wondering eyes should appear … but a pair of toy soldiers, a scattering of deer. Led by a mouse, near a pair of  St. Nicks, who was grinning and tall and most surely called Mick.

Outside Woodbury Hall’s entrance, Anarumo stationed the inflatable soldiers, who wore red duds instead of Corps of Cadets fatigues, and stood at either side of a “toy shop” sign. To the soldiers’ left stood two giant snowpeople, with carrot noses and coal-drop grins. In their scarves and fur hats, they were braced for New England chill, even if snow was scant.

The collection’s centerpiece, a 2-story-tall Mickey Mouse, has been part of President Mark C. Anarumo’s display for years.

Further left stood Snoopy, Charles M. Schultz’s famous beagle, arms akimbo, perhaps calling Woodstock in for a landing. He was at a COVID-19-appropriate distance from the Grinch, who seemed mischievously searching for Whos to torment.

One Santa stood between two gift-laden sacks and two reposing reindeer, perhaps reviewing Christmas Eve flight patterns. Another Santa, lit from the inside and driving a bow-adorned red convertible, held out a candy cane in offer. Maybe that’s how Santa delivers all that loot so quickly — he’s two places at once. (It’s OK, St. Nick; your secret’s safe with us.)

The collection’s centerpiece, a 2-story-tall Mickey Mouse, has been part of Anarumo’s display for years and anchored his collection in Colorado Springs, his pre-Norwich home.

“Over the years, we’ve accumulated quite a bit of decorations; our last home … became locally famous. People would drive from a pretty good distance to come check it out,” Anarumo said. “Now we have wreaths in all the windows that we’ve handmade and some candles in all the windows.

“I’ve noticed a lot of folks with their kids walking out front … and they come up and touch the inflatables and take some pictures,” he added. “We encourage and welcome that very much.”

In a statement, Scott, who was elected to a third term as Vermont governor last month, said he hoped many more Vermonters would express festive sensibilities by decorating homes, businesses and trees.

“I know how hard this pandemic has been, especially as we make our way through the holidays without the ‘normal’ get-togethers and sense of closeness we all want,” Scott said in the statement. “So, in celebration of the coming holiday season, I think it’s time to lift our spirits. Let’s get creative and show the world that Vermonters are here for each other, even through these dark and difficult times.”

Scott encouraged Vermonters to share pictures of their favorite displays (self-nominations perfectly OK) on social media, using the hashtag #VTLightsTheWay. He said local news outlets might use some of the posted photos to help spread the light (and delight).

Anarumo said his display would also include a live Christmas tree, donated by the Abares — the family behind the famous fall Rook Dining Out picnics — to stand indoors by a Woodbury Hall window, for all to see.

“It’s been a pretty difficult year for everyone,” Anarumo said. “So, if we can do our part in raising the spirits, we would love to do that.”