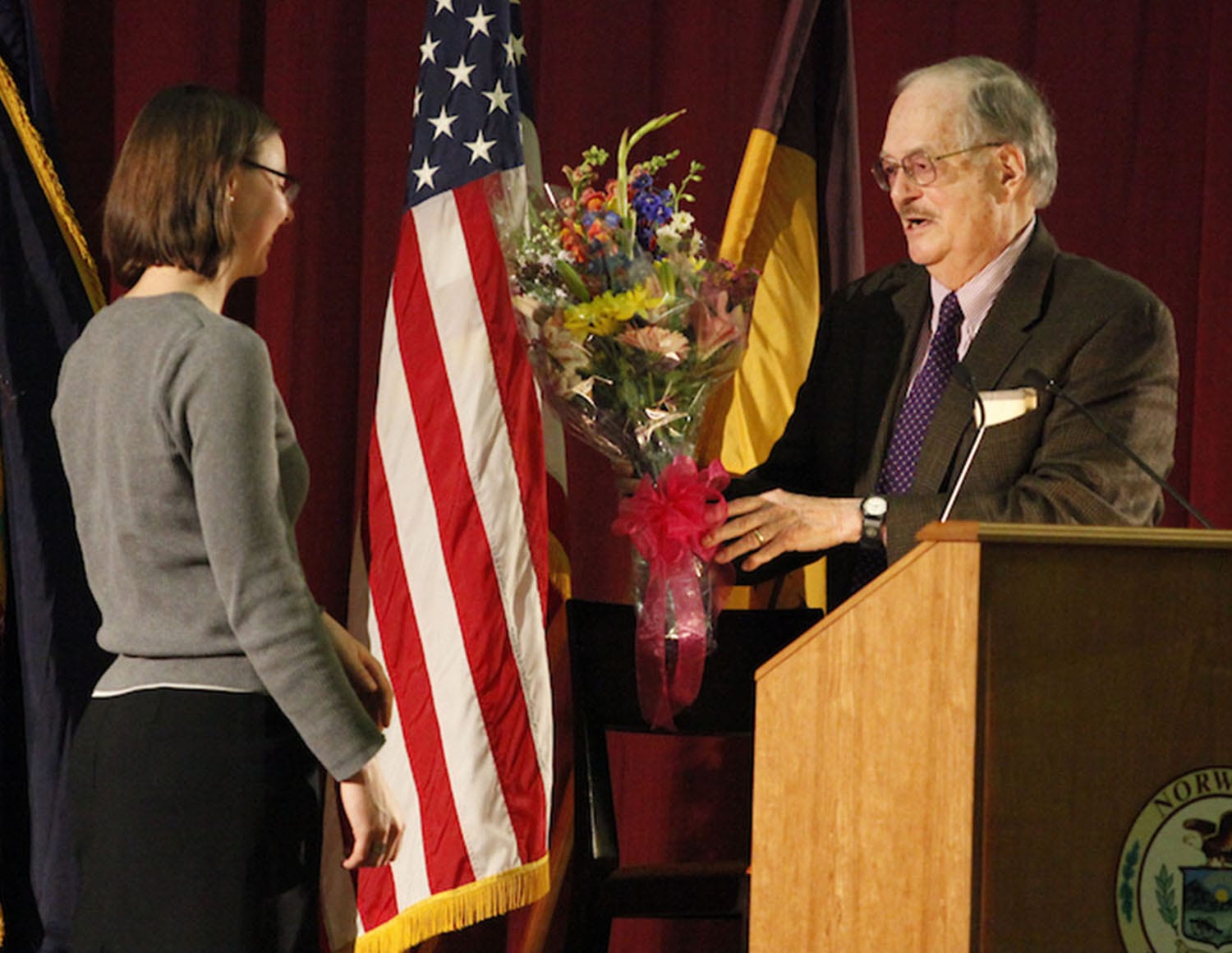 In 1974, D’Este was an Honor Graduate of the U.S. Army Command and General Staff College, in Fort Leavenworth, Kansas, and earned a master’s degree from the University of Richmond. In 1992, D’Este received an honorary doctorate of humane letters from Norwich University.

D’Este won the 2011 Lifetime Achievement Award in military writing from the Pritzker Military Library in Chicago. The award recognizes a living author for a body of work that has profoundly enriched the public understanding of American military history.

The Carlo D’Este ’58 Military History Award, a $1,000 prize created in D’Este’s honor, is awarded annually at the Military Writers’ Symposium to an outstanding undergraduate senior who is pursuing a history or military history major.

D’Este wrote 10 books on World War II, including biographies of U.S. Army Gens. George Patton and Dwight Eisenhower and Sir Winston Churchill, the famous British statesman, army officer and prime minister. He also wrote “Decision in Normandy,” which The New York Times called “one of the most outstanding accounts of the Normandy campaign.”

D’Este won the 2011 Lifetime Achievement Award in military writing from the Pritzker Military Library in Chicago. The prize carries a $100,000 honorarium and recognizes a living author for a body of work that has profoundly enriched the public understanding of American military history.

In 2010, D’Este won the Andrew J. Goodpaster Prize, a prize honoring the work of soldier-scholars, from the American Veterans Center.

D’Este not only wrote history books, he reviewed those by others for The New York Times, The Washington Post, among others. He spoke on history on television, notably the History Channel, Fox News and C-SPAN and lectured at the U.S. Army Command and General Staff College, the National War College and the U.S. Army War College.

D’Este told the Chicago Tribune in 2011 that he saw World War II activity from a Pacific perspective as he grew up in the San Francisco Bay Area. He said he visited many of the war’s battlefields, including Normandy, during his Army days in Europe.

“Seeing the military equipment left there, and walking on Omaha Beach, gave me a sense of place and piqued my interest in finding out exactly what happened there,” he told the Tribune.

After leaving the Army, D’Este stayed in England, eventually doing research at King’s College London and meeting military historians Martin Blumenson, whom he’d later call an important influence, Nigel Hamilton and Forrest Pogue. He told the Tribune the release of papers and collections from World War II leaders made late 1970s and early 1980s a good time to research the conflict.

In interviews during his career, D’Este said good storytelling and other military historians were his lodestars. In 2003, on C-SPAN’s “Book TV,” D’Este described how Barbara Tuchman’s 1962 Pulitzer Prize-winning “Guns of August,” which described World War I’s first month, had inspired him.

“She talked about the people, the events. It just brought the whole thing to life,” D’Este said. “Later on, when I first got into this (writing) business, I thought of her, and how I wanted to write, and what I hoped to bring to my own writing was that sort of thing, to make history come alive, to make the people and the events something that people not only want to read but meaningful.”

In a 2008 interview with Lisa Brucken, now an academic success coach in Norwich’s Center for Student Success, D’Este described learning discipline from his student experience at Norwich, including rigorous lessons from English professor Peter Dow Webster, then the English Department chairman.

“He worked the heck out of us,” D’Este said. “He taught you to think.”

Many who know D’Este said he made others think just as vigorously.

“Carlo D’Este has made a tremendous collective contribution to the literary community at large,” retired Army Col. J.N. Pritzker, the Pritzker Military Library and Tawani Foundation’s founder, said in a 2011 statement announcing D’Este’s honor. “He has spent as much time in the field, with his boots on the ground, as he has seeing to it that scholars of the next generation are carefully mentored while progressing along their own paths.”

“While we are saddened by his passing,” Reid said, “his contributions, especially his passion for promoting world-class military history research and writing, will continue to echo through Norwich, and the history community at large, for years to come.”

And Norwich President Emeritus Richard W. Schneider said D’Este and his wife, Shirley, shared a devotion to the university and a boundless energy for the symposium. Schneider said Carlo D’Este for years helped organize the event and pick the Colby Book Award winner. Together, Schneider said, the couple socialized with the authors when they came to campus, strengthening their camaraderie and ensuring a feeling of warmth and welcome.

“What I remember about Carlo was his deep commitment to Norwich,” Schneider said, "(to) provide academic programming that no one else in the world does. He loved the fact that this was the only such program in America.”