The NEST makes news, all around Vermont 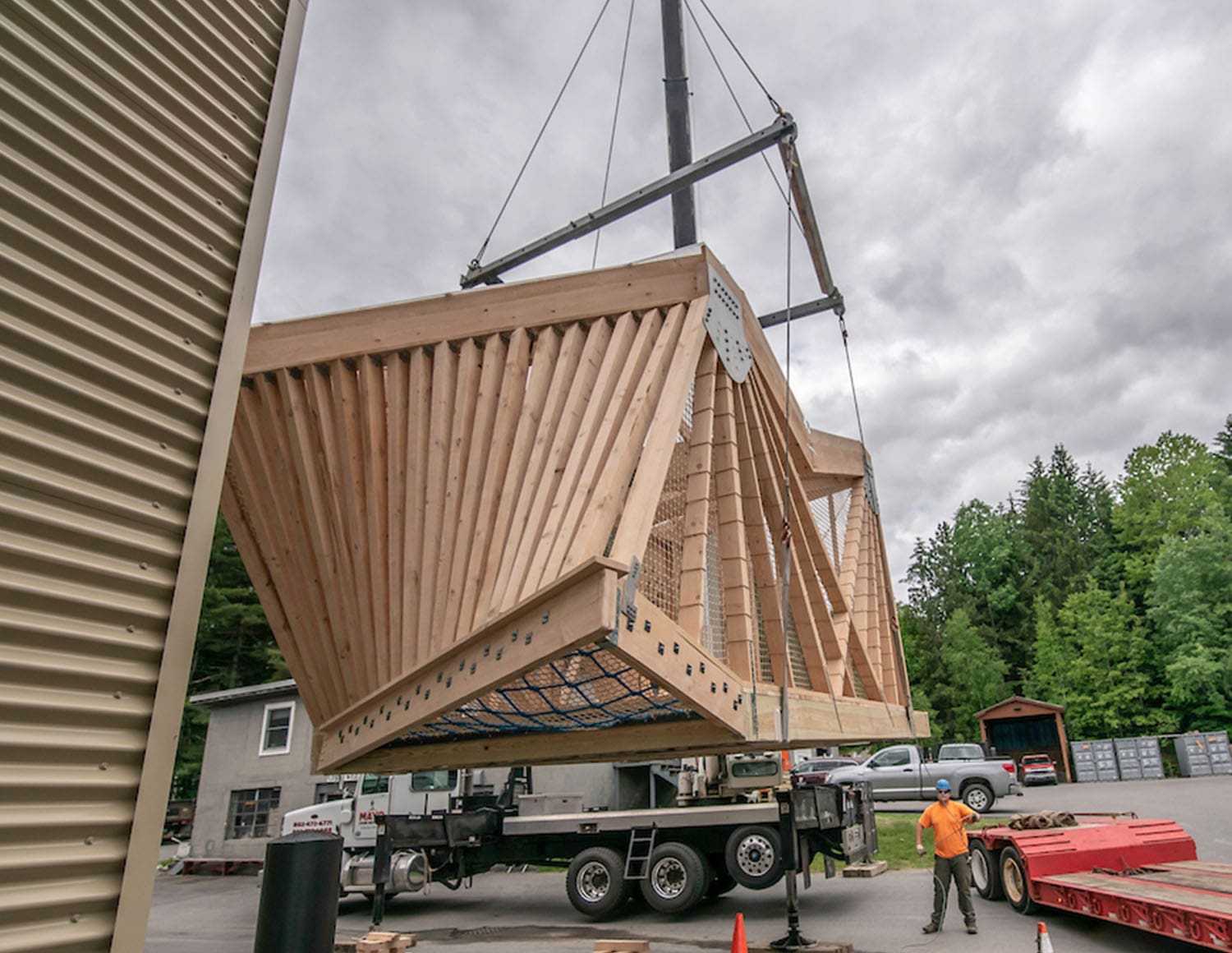 Ten students from Norwich University’s Design+Build Collaborative had already earned accolades from the American Institute of Architects, both the Vermont and New England chapters, for the NEST outdoor classroom/playhouse. In October, three Vermont broadcast news stations shined a spotlight. A Vermont news website joined the coverage just before Thanksgiving.

With COVID-19 changing the way lessons are taught, outdoor classrooms like NEST have become increasingly important.

In October, the American Institute of Architects’ New England chapter bestowed a Merit Award for designing and building NEST, which was part of playground renovations at Montpelier’s Union Elementary School. It emerged from 163 entries to earn the award.

NEST, designed in 2018, aimed to transform an aging playground into a space for physical exploration, imaginative play and experiential learning.

The project received a Citation Award from the American Institute of Architects’ Vermont chapter in December 2019.

NEST, designed and built over 15 weeks in 2018, aimed to transform an aging playground into a space for physical exploration, imaginative play and experiential learning. The project incorporated a variety of learning spaces into its design; it could, for example, accommodate science lessons on crop cultivation.

The NEST studio actively engaged with the broader community. Parents, students and teachers consulted in the project, which was built with majority Vermont-sourced child- and environmentally friendly materials. It opened in August 2019.

“These students were stellar; they pushed the boundaries of their design thinking and then followed it through,” Stonorov said on air. “They (developed) ideas born from working with the students in the elementary school — hearing their vision, translating those ideas and distilling them (into the final design).”

Bachelder showed favorite NEST elements, a helix wall that took shape with hands-on construction and a board of large movable pegs. By helping to paint the pegs in bright blues, yellows and reds, the Union Elementary School students took pride in helping complete the project, she said.

Bachelder said four of students in the NEST studio led a  workshop in an elementary school art class and solicited ideas for the playhouse.

“They drew us really elaborate pictures,” she said.

Heraty said NEST gives students a place to read and relax or climb and play.

“I think for them it resembles the childhood dream of a treehouse,” Heraty added.

WPTZ-TV, Channel 5, an NBC affiliate, posted a text story about the project last month. And on Nov. 21, the VTDigger website added its own story.

NEST, an Americans With Disabilities Act-accessible structure, was built with hemlock and white cedar lumber from Fontaine Mills in East Montpelier and Goodridge Lumber in Albany, Vermont and sealed with Vermont Natural Coatings made in Hardwick, Vermont. Chris Temple and Kenneth Bushey from De Wolfe Engineering Associates worked pro bono on the engineering of the project.

In Vermont, the move-classes-outside push gained traction when the weather was warm. In August, WCAX described a timber frame outdoor classroom Thetford Academy in Thetford, Vermont, built a couple of years ago that gained use during the pandemic. Also in August, VTDigger reported that the White River Valley School in Bethel, Vermont, planned to learn in outdoor classrooms through the Thanksgiving break.

Through the initiative, the magazine added, 10 working groups of volunteers are studying funding, safety and infrastructure to move classes outdoors.

“We’re trying to reframe the way schools are thinking about their return and redefine what they consider to be plan A,” Green Schoolyards of America founder Sharon Danks told Fast Company. “So, if plan A is outside, then you can fall back on the other things when you need it.”

Norwich’s School of Architecture+Art has taken the learn-outdoors theme a step further, launching a global contest for high school students to design an outdoor classroom for scholarship dollars toward a Norwich design-build education.

The competition, open to all high school students, launched Nov. 4; the submissions deadline is Dec. 13. Students may register and compete as individuals or in teams of up to four members.

All entries will receive ideas and suggestions from Norwich University School of Architecture+Art faculty, who will also advise and guide registered competitors. Click here for all details on the design parameters and submission guidelines.