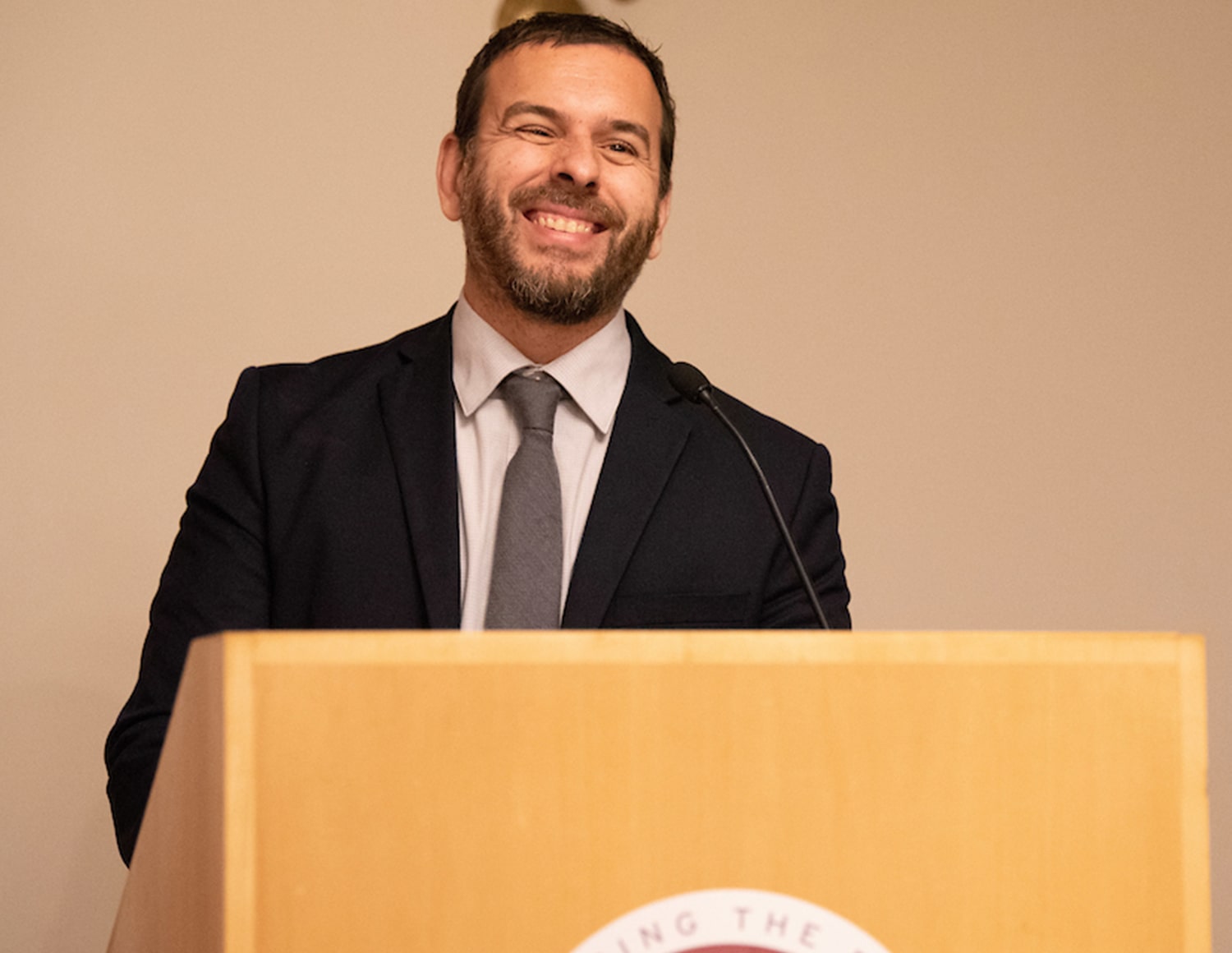 For Norwich University’s 63 December graduates, classes are over, degrees are in hand, and mortarboards are tossed, if only virtually. But on Thursday night, speakers at the virtually held midyear Commencement promised that though college years were short, the bonds last a lifetime.

These bonds, they added, will help get graduates through challenges current, like a country pushing through the coronavirus pandemic, or future.

In a video broadcast on Facebook Live, Eddie Habeck ’99 M ’10, took the Mack Hall lectern and said he was living proof of the Norwich Forever-strength of Hill-forged bonds and values. Somewhere out there, he told the new graduates, is someone else who also walked the Upper Parade Ground, or pocketed a challenge coin or shivered through one of Vermont’s February freezes.

“Regardless of where you end up, I guarantee you will find a Norwich person or connection that you can count on there for support.” Eddie Habeck ’99 M ’10, Alumni and Family Relations Office director

“I can promise you … (that) the friends you made here will be part of your life for many, many years to come,” Habeck said. “And regardless of where you end up, I guarantee you will find a Norwich person or connection that you can count on there for support.”

The night’s guest speaker, Gene Enriquez, a 2007 graduate and Chicagoan who enrolled at Norwich in 2000, joined the Vermont Army National Guard in 2004 and deployed to Iraq during Operation Iraqi Freedom. He’d later Attend Officer Candidate School, earn a commission as an infantry officer and serve in Afghanistan during Operation Enduring Freedom. In 2017, Enriquez served as the deputy chief of the Office of Defense Cooperation at the U.S. embassy in North Macedonia.

Since September, Enriquez has been serving as executive officer of the 1st Squadron 172nd Cavalry Regiment in St. Albans, Vermont. He’ll soon deploy to Europe.

Enriquez said although the armed forces are reducing in some overseas theaters — President Donald Trump has ordered troop sizes to be cut to 2,500 in Iraq and Afghanistan — combat challenges remain formidable.

“These are really uncertain times,” he said. “But the way the world has turned … our nation is still expecting us, Norwich graduates (and) alumni to accomplish some of the most difficult tasks that are out there.”

During his military service, Enriquez, who has sponsored Norwich cadets in exchange in the Balkans and has served as the Norwich University Alumni Club of Burlington’s chairman, said his Norwich ties have been consistent and constant since graduation.

In Iraq, he said, he was surrounded by Norwich grads — drivers, gunners, line leaders. These fellow soldiers, he said, always had his back as he had theirs. Everywhere he went — San Antonio, North Macedonia, Germany, Romania, France, Greece, Kosovo, there were more.

“Whether you expect it or not, you would find your Norwich ties could help you, the organizations you work for, achieve some great things,” he said. “And it really all starts with staying connected.

“I’m really proud of you for the challenges you’ve faced,” he added. “Congratulations, do great things.”

‘We'll figure out how to make this right’

After Habeck read the names of the December graduates, who without the pandemic would have been honored with an in-person dinner, President Mark C. Anarumo offered his sendoff. Repeating his promise to the May graduates, Anarumo said the December graduates would be welcomed back to walk the stage at a Commencement of their choosing when the pandemic is subdued and normalcy returns.

“We will figure out how to make this right for every single one of you,” he said.

Anarumo said the December graduates saw major university milestones — Mack Hall’s construction, the bicentennial celebration, ice hockey championships. And as the university adapted to challenges like the pandemic, the students adapted, too, he said.

“We’re only standing here because we would not give up,” he said.

Repeating a theme from Convocation and Commencement earlier this fall, Anarumo said the world needs Norwich graduates, and their undying sticktoitiveness, more than ever.