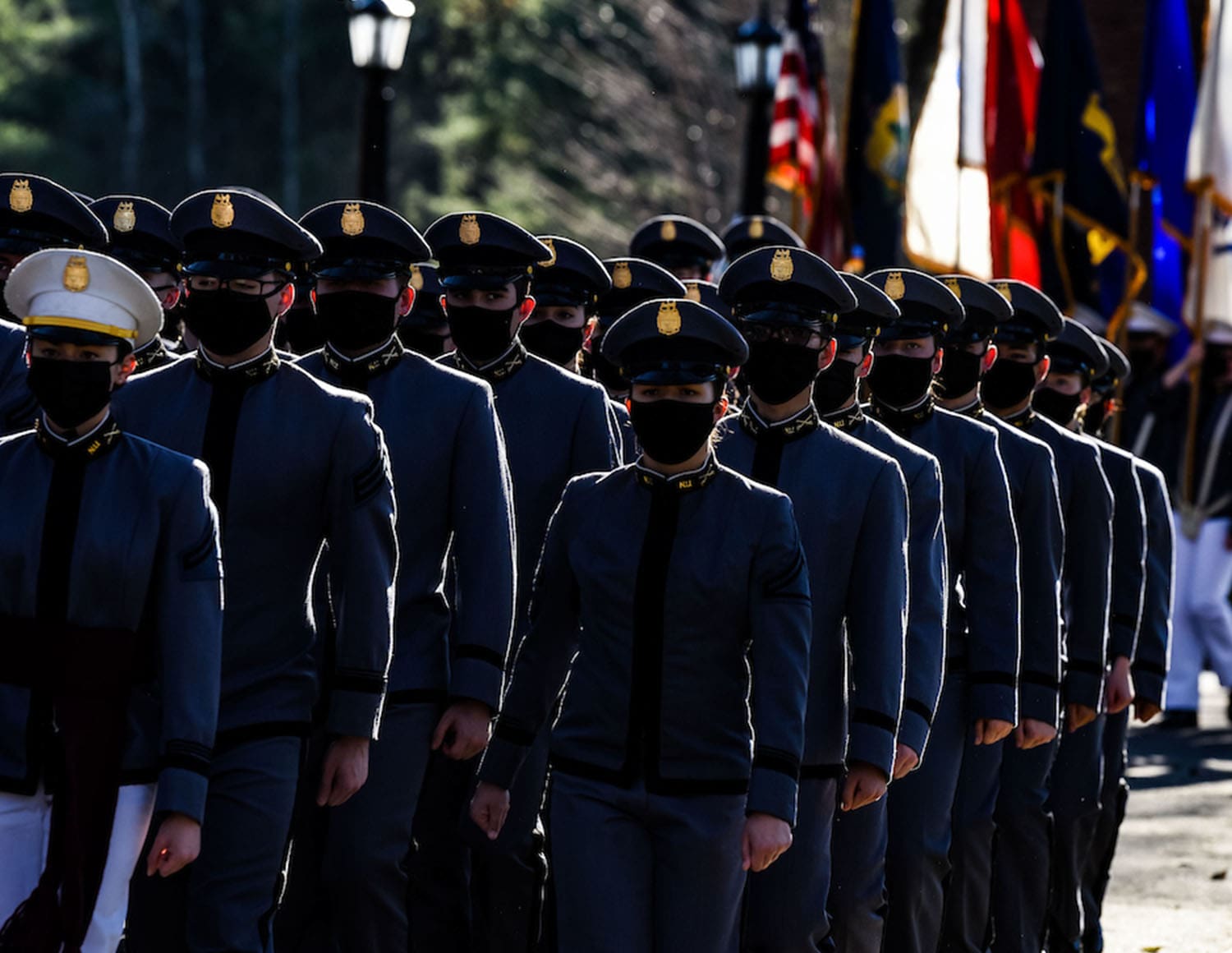 With the boom of cannons, the crackle of rifles and the orderly marching of a flag-toting Corps of Cadets, Norwich University honored U.S. armed forces veterans on Veterans Day this past week. Two special-guest Norwich graduates with distinguished service records reflected on what it means to serve.

Tuesday’s traditional Corps of Cadets review, with backing Regimental Band drum staccato and braying brass, included a brief history refresher from Norwich junior and cadet Carson J. Heskett. From the reviewing stand, Heskett recalled how the Allied nations and Germany had signed the Treaty of Versailles on June 28, 1919, officially marking the end of World War I. As Veterans Affairs webpage recounts, fighting had stopped months earlier — on the 11th hour of the 11th day of the 11th month of 1918. Therefore, Nov. 11, 1918, is deemed the war’s end.

The Veterans Affairs webpage added that President Woodrow Wilson instituted Armistice Day on Nov. 11, 1919, saying, “To us in America, the reflections of Armistice Day will be filled with solemn pride in the heroism of those who died in the country’s service and with gratitude for the victory.”

“What protects … this very fragile experiment of democracy are our veterans … our service members. Men and women who stand for what this country is all about will always be the bulwark against those who want to take us down.” John J. Broadmeadow ’83, retired U.S. Marine Corps lieutenant general

Congress officially recognized World War I’s conclusion with a June 4, 1926, resolution. Then, on May 13, 1938, Congress declared Nov. 11 a legal holiday called “Armistice Day.” In 1954, in the aftermath of World War II and at veterans groups’ urging, the holiday was renamed “Veterans Day.” President Dwight Eisenhower issued the Veterans Day proclamation on Oct. 8, 1954.

“I believe in Norwich, my Alma Mater,” Flint wrote, “because within her halls throughout the years, these tenets have found expression, while men have been taught to be loyal to duly constituted authority in thought and word and deed; to view suffrage as a sacred privilege to be exercised only in accordance with the dictates of conscience; to regard public office as a public trust; and finally to fight, and if need be to die, in defense of the cherished institutions of America.”

Anarumo, observing his first Norwich Veterans Day since becoming president June 1, nodded to the Marine Corps, which was celebrating its 245th birthday, having been established Nov. 10, 1775. (The U.S. Navy, which was established Oct. 13, 1775, marked its 245th birthday last month). Anarumo then hailed the Corps of Cadets for its courage, resilience and conduct.

“I want to thank every cadet … (and) every civilian student on this campus and our local host community for allowing us to have an in-person experience this fall,” Anarumo said. “And you cadets who have behaved and conducted yourselves in such an honorable fashion to keep this campus open, I thank each of you personally.”

Broadmeadow retired from the Marine Corps on Oct. 1 after 37 years of active duty. He served in a plethora of roles, including director of Marine Corps staff and deputy commander of the U.S. Transportation Command. Broadmeadow told the cadets he once stood where they stand and that coming back to campus as a new military retiree had brought him full circle.

“We all understand those things that are important, that we need to be a reflection for the rest of the world,” Broadmeadow said.  “What protects … this very fragile experiment of democracy are our veterans … our servicemembers. Men and women who stand for what this country is all about will always be the bulwark against those who want to take us down.”

Robertson, now commander of the Naval Surface and Mine Warfighting Development Center in San Diego, said veterans followed many paths to the armed forces. National events, such as the Dec. 7, 1941, Japanese bombing of Pearl Harbor in Hawaii, and the Sept. 11, 2001, terrorists attacks on New York’s Twin Towers and the Pentagon in Washington, D.C., have provided particular impetus, he said.

However, Robertson said, no matter how, why or where they served, all veterans share a common bond.

As history has unfolded, the United States’ enemies have morphed and conflicts have shifted, Robertson said. Conflict for global power is again intensifying, he said, but the quality of military personnel, including those developed at Norwich, will always give the United States an advantage over any adversary.

“Honoring those who have served isn’t just about what we say here today, but how we honor our veterans every day of the year,” Robertson said. “It’s remaining committed to supporting them and their families in every way that we possibly can.”