An act of valor, an everlasting gift of legacy 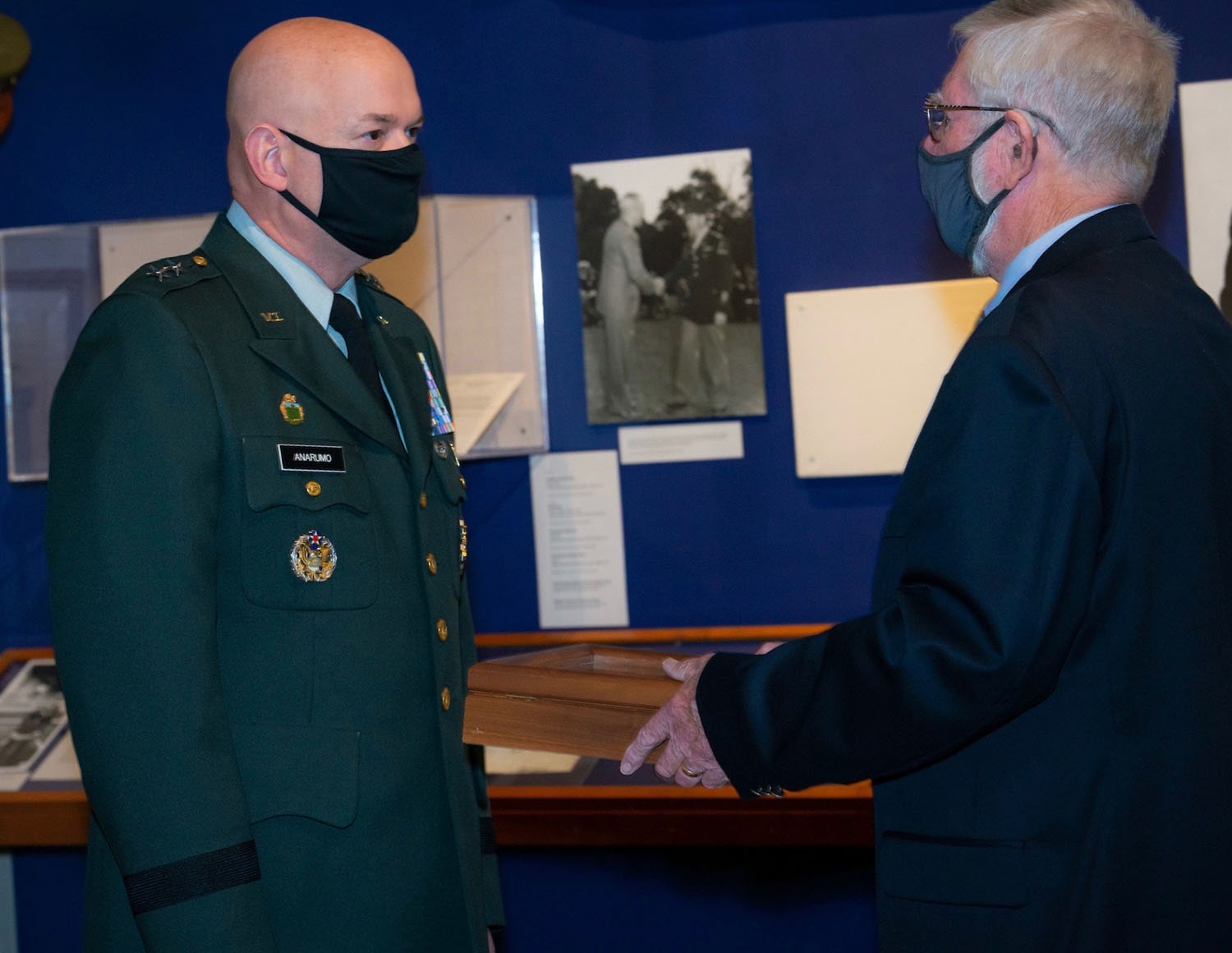 James Burt risked his life for his country during World War II when bullets flew, peril mounted and the struggle’s outcome hung in the balance. Last month, his family donated his highest military honor to his university.

James Burt, a 1939 Norwich University graduate, received the Medal of Honor for World War II heroism, especially the Battle of Aachen in Germany. Burt’s son, James Burt ’68 and his wife, Palmla, donated the elder Burt’s Medal of Honor to Norwich University’s Sullivan Museum and History Center during a physically distanced ceremony on Oct. 12, 75 years after the elder Burt had received it.

When the younger Burt said he wanted to donate the medal to Norwich, Schneider worked with him to arrange a proper reception.

James Montross Burt (1917-2006) was born in Lee, Massachusetts, and graduated from Norwich University in 1939 at age 22 with a bachelor’s degree in chemistry. On campus, he’d belonged to Theta Chi, Epsilon Tau Sigma and the Glee Club and served on the staffs of the Guidon campus newsletter and the War Whoop yearbook, played football and ran track.

Burt commissioned as a 2nd lieutenant in the U.S. Army and started active duty in 1941. He fought in World War II campaigns in North Africa, Sicily and Normandy and received his Medal of Honor for leadership in the slightly-more-than-monthlong Battle of Aachen.

During the Oct. 12 ceremony, Cates described Burt’s Battle of Aachen heroism in a citation like the one President Harry Truman read when bestowing the medal in 1945.

As the Defense Department’s website describes, the U.S. Army had crossed the Siegfried Line, along Germany’s western border, in September 1944. On Oct. 13, Burt led Company B of the 66th Armored Regiment, 2nd Armored Division into Wurselen, north of Aachen to surround Germans hunkered down there.

U.S. infantrymen took gunfire on the mission’s first day, the website said, Burt rode behind the infantryman in a tank, about 200 yards behind.

“(Burt) calmly got out, walked in front of the infantrymen through a hail of gunfire, and waved his tanks into good firing positions,” the website said.

Burt then returned to his tank to direct fire from its rear deck. Even after gunfire wounded him in the face and neck, Burt remained in the open until artillery knocked out the enemy weapons.

As the Congressional Medal of Honor Society’s website recounts, Burt on Oct. 15, 1944, took his tank 300 yards into the enemy lines, dismounted and stayed for an hour, relaying data to friendly gunners. Twice more that day, the website said, Burt entered enemy territory on reconnaissance under gunfire.

Both the Defense Department and Honor Society’s websites described how Burt held the combined forces together for the next eight days through heavy shelling and soaking rain. Despite his injuries, Burt kept rescuing wounded soldiers, fighting enemy personnel and destroying equipment. Cates read of how during the German counterattack, the day after he directed the tanks, Burt left cover and went 75 yards through heavy fire to help the wounded infantry battalion commander.

Too busy to be afraid

In a Medal of Honor Society video posted on YouTube, Burt described heading for the infantry command post and seeing an object hurtling at him; he said he thought it was a piece of shell that would cleave him in two. After a period, he said he wasn’t sure whether it was two minutes or 20, he realized he was alive, could move, and was buried from the waist down in a hole.

Burt said he climbed out and headed toward the command post, discovering a wounded comrade along the way. He dragged him in.

“I learned later it was the infantry battalion commander,” Burt said. “The infantrymen all knew what I’d done. Having done that, that must have been what inspired them to work for me and with me and cooperate so well when I, in effect, took them over.”

Burt said he wasn’t afraid because he was too busy getting to the next minute, the next hour the next day to let fear take over.

During the Sullivan Museum ceremony, Cates read, “Capt. Burt held the forces together, dominating and controlling the critical situation through the sheer force of his heroic example. In succeeding days, he never faltered in his determination to defeat the strong German forces opposing him. … He took great risk to rescue wounded comrades and inflicted prodigious destruction on enemy personnel and materiel even though suffering from his own wounds.

“Capt. Burt’s intrepidity and disregard for personal safety were so complete,” Cates continued, “that his own men and the infantry that attached itself to him were inspired to overcome the wretched and extremely hazardous conditions (that) accompanied one of the most bitter local actions in the war.”

In an email, Hart said the idea for a presentation ceremony has been going on for more than a year. The coronavirus pandemic scrapped plans to hold the ceremony in February.

“This is important to the university and museum for a lot of reasons,” Hart wrote. “We had heard through from friends of Capt. Burt and more recently his family that he had always intended his Medal to reside at Norwich, but as with anything the museum does, we tell families that when they’re ready to make the donation, we’ll be here.

“As historians, we know, all too well, that we’re losing our World War II generation … every day,” Hart added. “A lot was given up and even more lost by everyone during World War II  … if we’re able to at least shine a light on one such story, we’ve accomplished our goal.”

At the ceremony, Anarumo, dressed in his Vermont Militia dress uniform festooned with U.S. Air Force ribbons, saluted the younger Jim Burt when presented with the elder Burt’s medal. Anarumo said the battle Burt fought in tipped the war toward the Allies.

“I’m an old tanker myself, and I’ve studied engagements like this as the reason our military is the force that is today,” Anarumo said. “So, I thank you, sir, for entrusting us with this.”

After the war, Burt returned to civilian life, building a career in the paper industry. He’d later earn a master’s degree in education from Keene State College in 1969 and work as a mathematics and business instructor at Franklin Pierce College. He also served as military aide to Massachusetts governors Christian Herter Jr. and Paul Andrew Denver.

Throughout his life, Burt continued to be active with Norwich University. In 1990, the university dedicated James M. Burt Drive near the Plumley Armory in his honor.

Burt died in February 2006 in Wyomissing, Pennsylvania at age 88.

In the Medal of Honor Society video, Burt described receiving the medal from Truman.

“It was a lovely day in the garden behind the White House,” he said. “I felt proud. I thought he was a good president. He said, ‘If you ever have a problem, get in touch with me, direct.’”