‘It was our duty to bring those men home.’ 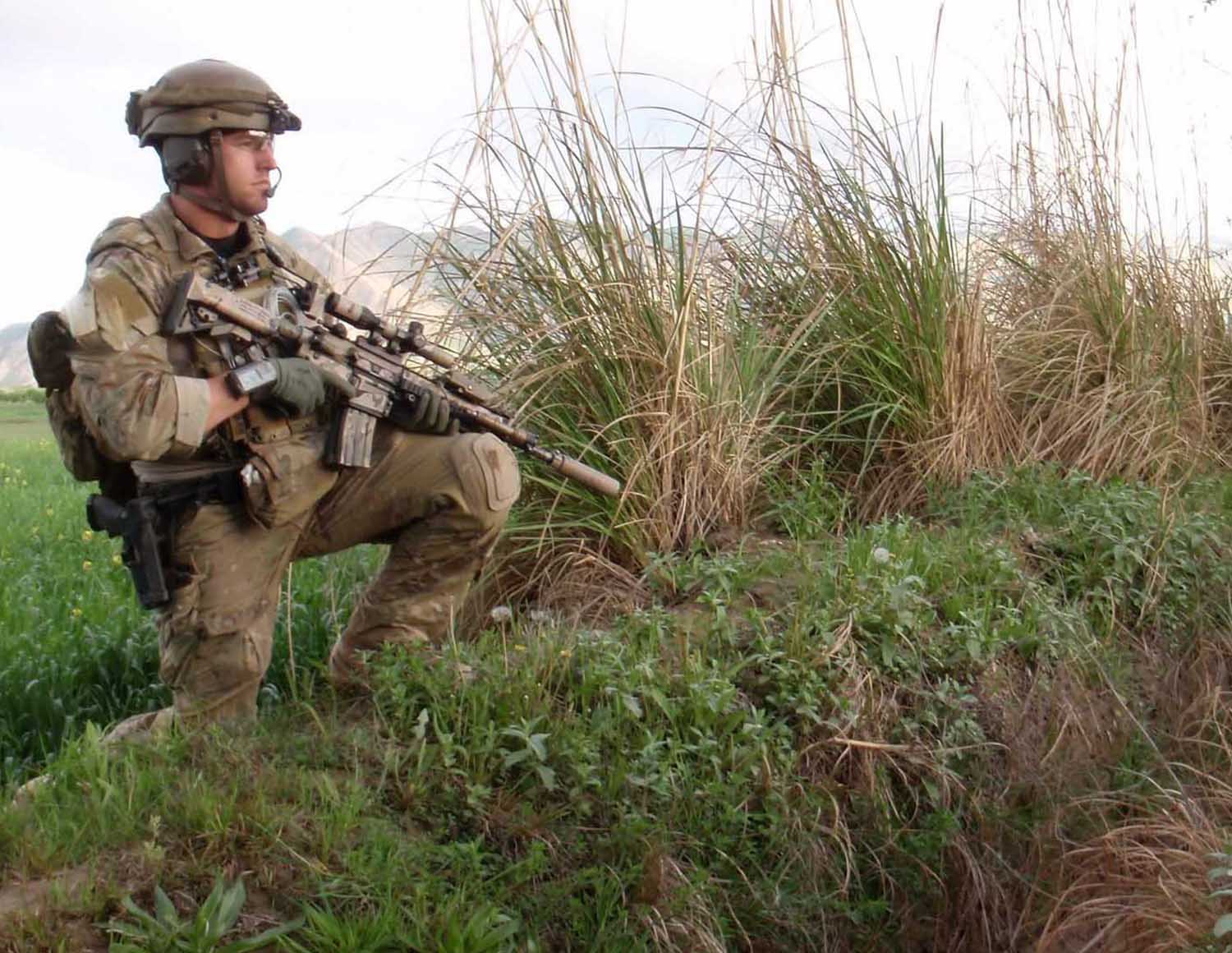 This past Sept. 11, Payne, now an Army sergeant major who in 2017 earned a Bachelor of Science degree in strategic studies and defense analysis from Norwich’s College of Graduate and Continuing Studies, received the Medal of Honor, the American military’s highest honor.

Payne spoke Oct. 2 with staff from Norwich University’s College of Graduate and Continuing Studies and Office of Communications about receiving the medal.

Trump also spoke to Payne’s 6-year-old son Aaron, who was in the audience, saying, “I want you to know that your dad is one the bravest men anywhere in the world. … I think you knew that before we knew it.”

Payne, 36, is the first U.S. service member to receive the award for actions in the fight against the Islamic State. The Army, on its website, called the mission one of the largest hostage rescue operations in history.

Payne grew up in Batesburg-Leesville and Lugoff, South Carolina, and entered U.S. Army basic training at Fort Benning, Georgia, in 2002, 10 months after graduating from high school. As the U.S. Army website reported Sept. 9, Payne had wanted to join the U.S. Marine Corps at age 17, but his mother wouldn’t sign his enlistment waiver.

Payne’s interest in the armed forces developed in childhood, the story said. His grandfather had been in the Army, fighting in World War II, the Korean War and Vietnam War; two brothers and several cousins also served. As a child, Payne had gone to Fort Jackson, in Columbia, South Carolina, with his father, reveling in climbing on tanks and into helicopters.

As The Associated Press reported, Payne made his way into the Army Rangers, the Army’s elite raid force, and deployed to combat zones with the 75th Ranger Regiment. He received a Purple Heart for a knee wound sustained in Afghanistan in 2010 and won the Army’s Best Ranger Competition in 2012, after making sergeant 1st class.

During his Norwich interview Oct. 2, Payne said overcoming the 2010 knee injury, caused by a grenade blast, was grueling. He said doctors told him his knee was broken and that if he couldn’t recover enough to bend it, he might have to change careers.

“I wanted to prove to myself that I could get back in, working at a high level,” he said. “There was a time of sympathy from my parents, but when the doc gave me the green light to be aggressive on my physical therapy, it was all hands on deck.”

Payne told fellow soldiers at Fort Sill, Oklahoma, during a Sept. 24 discussion, that he rehabbed at his parents’ house in Lake Murray, Oklahoma. His father brought a stationary bike down from the attic and made him ride every day to break up scar tissue on the injured knee. His wife, Alison, a two-sport college athlete (lacrosse, cross-country), encouraged him to run again; Payne said she sometimes beat him on runs.

“Looking back at it, it was a family commitment; my mom (was) driving me to my physical therapy appointments every other day,” he said of his rehabilitation. “I was able to recover to a certain extent. It will give out on me every once in a while … but I’m able to perform my duties as a soldier.”

As the U.S. Army website described in a Sept. 24 post, Payne was the leader aboard a Chinook helicopter that flew into Islamic State-controlled territory in Hawija, Iraq, the early morning of Oct. 22, 2015. American soldiers were riding with elite Kurdish Peshmerga fighters on a mission to free 70 Iraqi hostages imprisoned by Islamic State insurgents. It was Payne’s 14th deployment.

In an Army video posted on YouTube in September, Payne said aerial photos suggested graves had been freshly dug near the Islamic State compound, prompting fears that the hostages would soon be killed.

“At that point,” Payne said in the video, “it was our duty to bring those men home.”

As an Army description of the mission said, when Payne’s unit landed, it strapped on night-vision goggles and rushed through hailing gunfire toward the compound as soon as ramp hit ground.

His team secured the building and Payne cut the locks on an armored cell door, freeing 37 hostages.

“You see their faces light up,” Payne said in the video. “Some are crying, some are excited. And while this is going on, there’s an intense firefight in another building.”

Payne recalled heeding a radio call for help from the team in that building, turning to a fellow soldier and saying, “Let’s get into the fight. Let’s go.”

Payne and his team ran 30 yards through many angles of gunfire, leaned a ladder against the building, which stood a story tall, and climbed to the roof, which was partially on fire. As his team fought enemy fighters below with grenades and small-arms fire, insurgent suicide bombers began detonating their suicide vests. The explosions shook the building.

When they couldn’t enter the building through the roof, Payne and his team climbed back down, trying to blast through first-floor windows. They couldn’t; the windows were fortified.

Back on the ground, though he knew he’d face more gunfire, Payne ran to the building’s entrance, burst inside, found the hostages’ holding cell door and cut one lock with bolt cutters.

Another lock needed to come off, but billowing smoke and flames forced Payne to run outside for air. A Kurdish fighter took the cutters, tried cutting the second lock, but couldn’t. So, Payne retook the cutters, ran back in and snipped off the lock.

“It was difficult to breathe, smoke’s pouring out, it’s hot,” Payne said in the Army video. “I was able to cut that bottom lock and bump down and say ‘CQB, CQB.’ Close-quarters battle.”

By then, with the building fully ablaze and near collapse, a mandatory evacuate was issued, Payne said in the video. He’d run back into building three times to clear it.

In his first pass, Payne’s team led a train of freed hostages out of the blackened building, moving them outside and toward awaiting helicopters. Payne described snatching an Islamic State flag off the wall then acting like a baseball third-base coach, waving hostages forward before following them out.

Then, Payne re-entered and noticed a despondent hostage who’d refused to leave. Payne grabbed him by the collar, all 200-plus pounds of him, and led him out.

Payne then went back in a final time and, ensured that everyone was out, called “last man.” Coalition forces formed a human wall to shield the hostages from enemy fire as they moved away from the building. The helicopters were so full with hostages that Payne has to stand during the flight back to Erbil.

He told the Norwich round-table, “We had the opportunity to liberate those hostages and give them a second chance at life and the pursuit of happiness. And a hostage rescue’s considered a no-fail mission.”

At least 20 insurgents died, but U.S. Army Master Sgt. Josh Wheeler, a member of the task force who had helped free a Kurdish partner force that enemy gunfire had pinned back, died, too. (Payne would name one of his sons Josh in Wheeler’s honor.)

In his Fort Sill talk, Payne said that brave as he’s been, he needed to learn to believe in himself early in his career. In the Norwich round-table, he suggested young cadets seek new challenges to build confidence and manage time to keep life in balance.

During his Norwich talk, Payne said that when he was studying for his Norwich degree, he followed a strict schedule, designating time to complete daily physical training, eat breakfast with fellow soldiers, spend time with family and study.

Payne is now stationed at Fort Bragg, North Carolina, where he lives with his wife and three children and serves on the U.S. Army Special Operations Command. In his Norwich discussion, as in his Fort Sill talk, Payne called himself a guardian of the Medal of Honor, not a recipient.

“I just want to be a man who wears it well and that lives up to the medal every single day,” he said. “It’s important you guard the legacy of your teammates and the legacy of the 9/11 generation.”