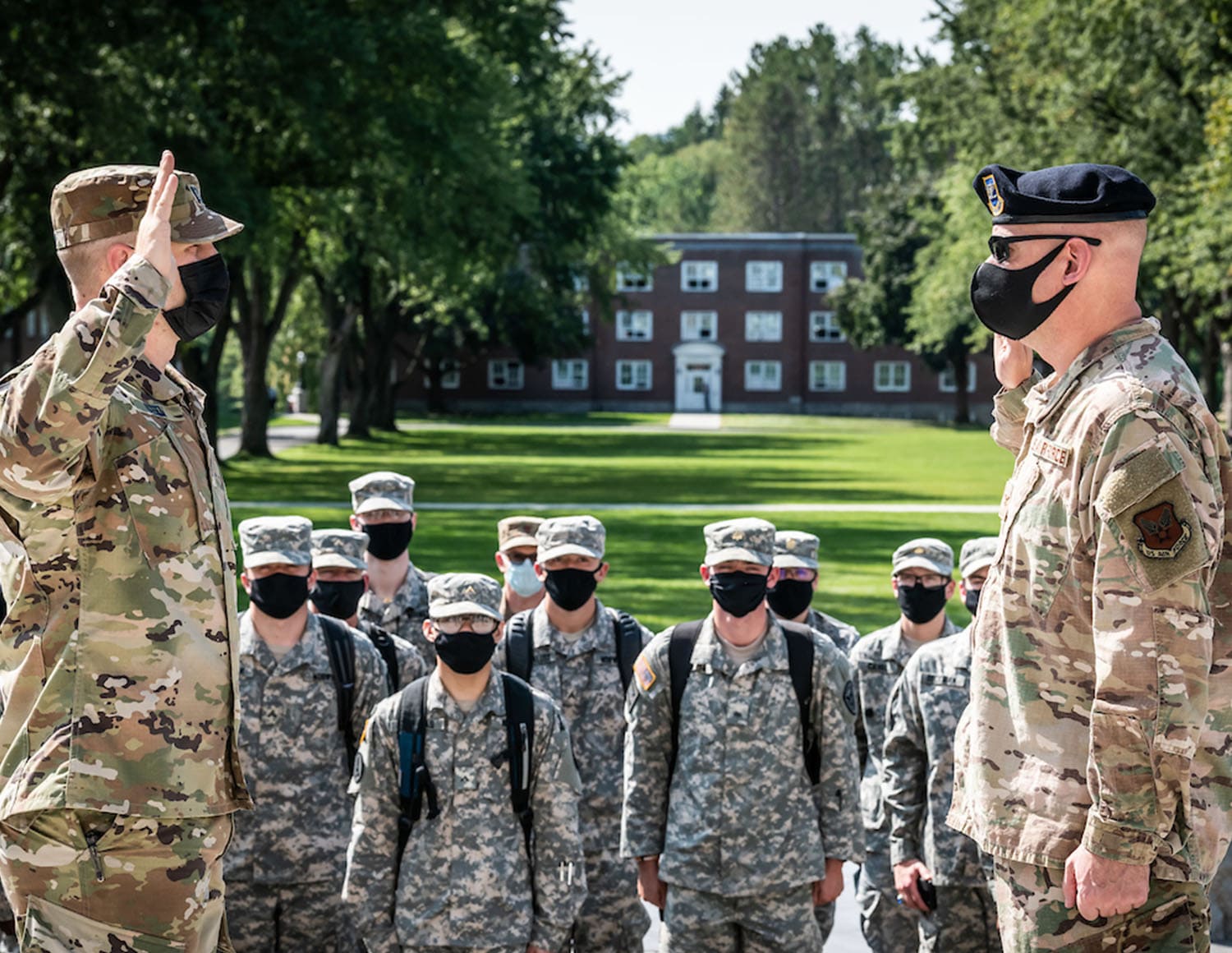 Space, the next frontier. The new U.S. Space Force, an outgrowth of the U.S. Air Force signed into being last December by President Donald Trump, stands poised to protect the nation from threats by missile, satellite and emerging technologies.

And with its own Space Force officer, Capt. James Olsen, commissioned this fall, Norwich will be involved in helping train the force’s next generation of officers.

Gen. John W. “Jay” Raymond, the Space Force’s new commander, says the newly christened sixth branch of the U.S. armed forces will be vitally important as China and Russia work to develop space capabilities — from signal jamming to destruction — that rival and threaten those of the United States.

Of the 42 U.S. Air Force cadets in Norwich’s Class of 2020, one, Air Force cadet Jacob Foster, a current senior, was selected to enter the Space Force and service after he graduates in May. Sixteen thousand active duty Air Force and civilian members were temporarily assigned to the Space Force when the National Defense Authorization Act was signed in December; 8,500 Air Force members volunteered in June to join.

In April, 86 U.S. Air Force Academy graduates moved directly into the U.S. Space Force, becoming the first commissioned personnel infused into the new service since its creation. Raymond said last month that a noncommissioned officer academy at Peterson Air Force Base in Colorado will become the Space Force’s official school. And the Fayetteville Observer newspaper in Arkansas reported in October that 70 ROTC students across the country were selected this fall to be space operators.

In an Oct. 27 webinar with the Washington, D.C.-based National Defense University on the Defense Department’s website, Raymond said space underpins all aspects of national defense and the new Space Force comes amid mounting threat.

As Air Force Magazine described, Space Force field commands will include the Space System Command, the Space Training and Readiness Command and the Space Operations command.

The Space Training and Readiness Command, aka Starcom, will lead the Space Force training starting in 2021; a colonel-run delta at Peterson Air Force Base in Colorado has overseen training and readiness in the interim.

The Space Systems Command, aka SSC, will lead development, asset acquisition and research and include the Space and Missile Systems Center, the Commercial Satellite Communications Office and other Defense Department space system program offices.

Integration with partners will matter, Raymond said. The U.S. saved almost $900 million and months of time by putting hosted payloads on Norwegian broadband communications satellites. Flexibilty will also be vital, he added, because the Space Force will need to adapt quickly to join the “digitally savvy military” the Pentagon wants.

“During these consequential times … the Office of the Undersecretary of Defense for Personnel and Readiness is … driving to cultivate a technologically dominant force that is strategically ready, globally relevant, and flexibly sustainable,” the Pentagon described in an October policy paper. “The cornerstone to this vision is achieving data dominance through digital modernization … and harnessing the skills of a generation of digital natives.”

These tools and systems will have to be acquired independently and work fast. Air Force Chief Information Officer Bill Bender cited reports that China has been on track to match, or surpass, U.S. and Russian space capabilities in five years. Raymond said that when China blew up its own satellite in 2007, the nation used a missile that went from the ground to low Earth orbit in mere minutes.

“The operations that happen in that (space) domain (a responsibility area 100 kilometers, or  62 miles, above the Earth’s surface and higher) — whether it’s military operations, commercial operations, civil operations, intelligence operations … happen at a speed that is way faster than anything that happens on the sea, or on the land, or in the air.

“We’re talking about objects in space traveling 17,500 miles an hour just to stay in orbit.”

Olsen’s transition from the U.S. Air Force to the U.S. Space Force came at 11:30 a.m. Sept. 10, when  Norwich President Mark C. Anarumo, who retired from the Air Force in August as a colonel, administered Olsen’s oath.

Of the 42 U.S. Air Force cadets in Norwich’s Class of 2020, one, Air Force cadet Jacob Foster, a current senior, was selected to enter the Space Force and service after he graduates in May.

“James is one of the first, so this is significant for Norwich,” Clifford said.

Shortly after his commissioning, Olsen said he joined the Space Force to continue his commitment to defending the United States. He said he’s glad to be part of a powerful, ever-advancing effort.

Clifford said that because Air Force ROTC Detachment 867, based at Norwich, includes seven other Vermont universities, selection for Space Force slots is highly competitive. Air Force cadets must volunteer to switch service branches and then enter a pool of applicants, much like Air Force cadets who apply for flight training.

“We are excited to see how many of our juniors (Class of 2021) will be chosen for the opportunity this spring,” Clifford wrote in an email. “There is a lot of excitement regarding this opportunity among our cadets.”