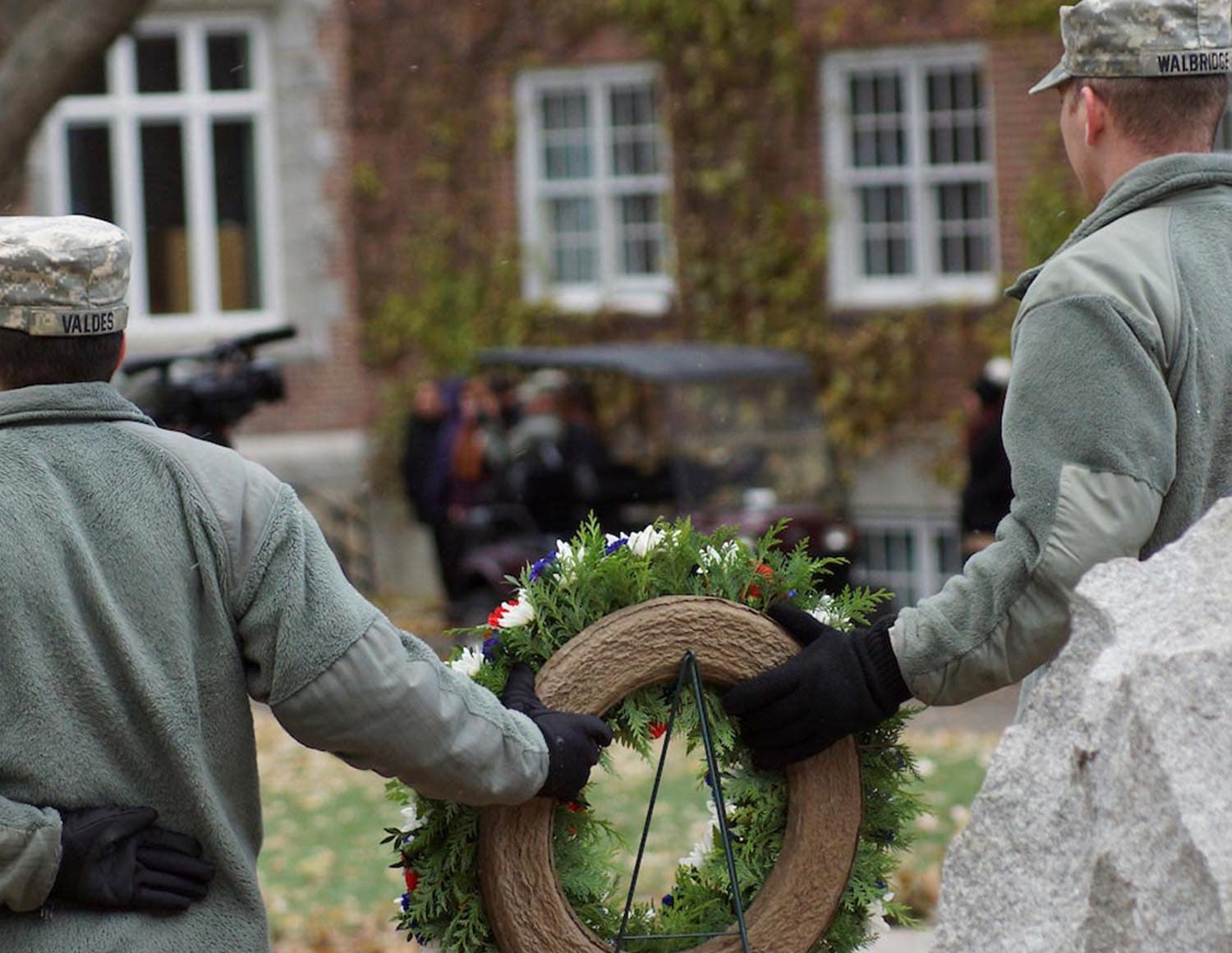 NORTHFIELD, Vt. – Norwich University will observe Veterans Day by conducting a Corps of Cadets review in honor of all veterans, past and present from 1:15 to 2 p.m. Tuesday, Nov. 10.

The ceremony will be livestreamed on Norwich’s Facebook page here: https://www.facebook.com/NorwichUniversity/. In the abundance of caution and for the health and safety of the Norwich and central Vermont community, the Norwich campus is closed to the public for the foreseeable future to include all buildings, fields and tracks.

Veterans, their guests, and community members are cordially invited to livestream the Veterans Day Observance, which will be conducted on Norwich University’s Upper Parade Ground. The ceremony will include prolonged cannon fire for the Roll of Wars, a wreath laying, firing of three rifle volleys and the playing of echo taps.

The reviewing officer and guest speaker is Lt. Gen. John J. Broadmeadow ’83, who retired from the U.S. Marine Corps on Oct. 1, after more than 37 years on active duty.

The reviewing officer and guest speaker is Lt. Gen. John J. Broadmeadow ’83, who retired from the U.S. Marine Corps on Oct. 1, after more than 37 years on active duty. His final assignment was in the Pentagon as the director, Marine Corps Staff where he was responsible directly to the Marine Corps commandant for the integration of seven three-star deputy commandants implementing significant changes across the Marine Corps. His previous three-star assignment was as the deputy commander of U.S. Transportation Command, one of nine U.S. Defense Department Combatant Commands with responsibilities for air, land, and sea transportation for the Defense Department worldwide.

Broadmeadow is the highest-ranking Marine officer to have graduated from Norwich and is honored to have received the Distinguished Alumni Award and have his named engraved on the Bicentennial Stairs.

Commissioned a Marine second lieutenant in 1983 after graduating from Norwich University, he served in a variety of billets. He commanded a company in Somalia for Restore Hope and a squadron in Iraq for Iraqi Freedom. He was notably responsible for planning and executing logistics operations for Naval Task Force 58’s amphibious assault into Afghanistan immediately following 9/11 and for the 1st Marine Division during the attack to Baghdad in 2003. He was the senior adviser to the 7th Iraqi Infantry Division as it assumed responsibility for operations in Al Anbar Province Iraq in 2008. Promoted to brigadier general in 2009, he commanded units in the Pacific, Afghanistan and the United States and served on the joint staff at the Pentagon. Before his assignment at USTRANSCOM, he was the commander of all Marine Corps bases and stations around the world.

Since May 1984, Broadmeadow has been very happily married to Karen (Rowe) also a NU ’83 graduate. Together, they have remained active with their alma mater in alumni clubs, reunion committees, and freshmen sendoffs. They are longtime members of the Partridge Society. John has returned to speak on campus numerous times including as the Joint Services’ Commissioning Official in 2018 and was the keynote speaker for Norwich’s Bicentennial Gala aboard the USS Intrepid in New York City.

Norwich University is a diversified academic institution that educates traditional-age students and adults in a Corps of Cadets and as civilians. Norwich offers a broad selection of traditional and distance-learning programs culminating in baccalaureate and graduate degrees. Norwich University was founded in 1819 by U.S. Army Capt. Alden Partridge and is the oldest private military college in the United States. Norwich is one of our nation's six senior military colleges and the birthplace of the Reserve Officers’ Training Corps (ROTC). www.norwich.ed