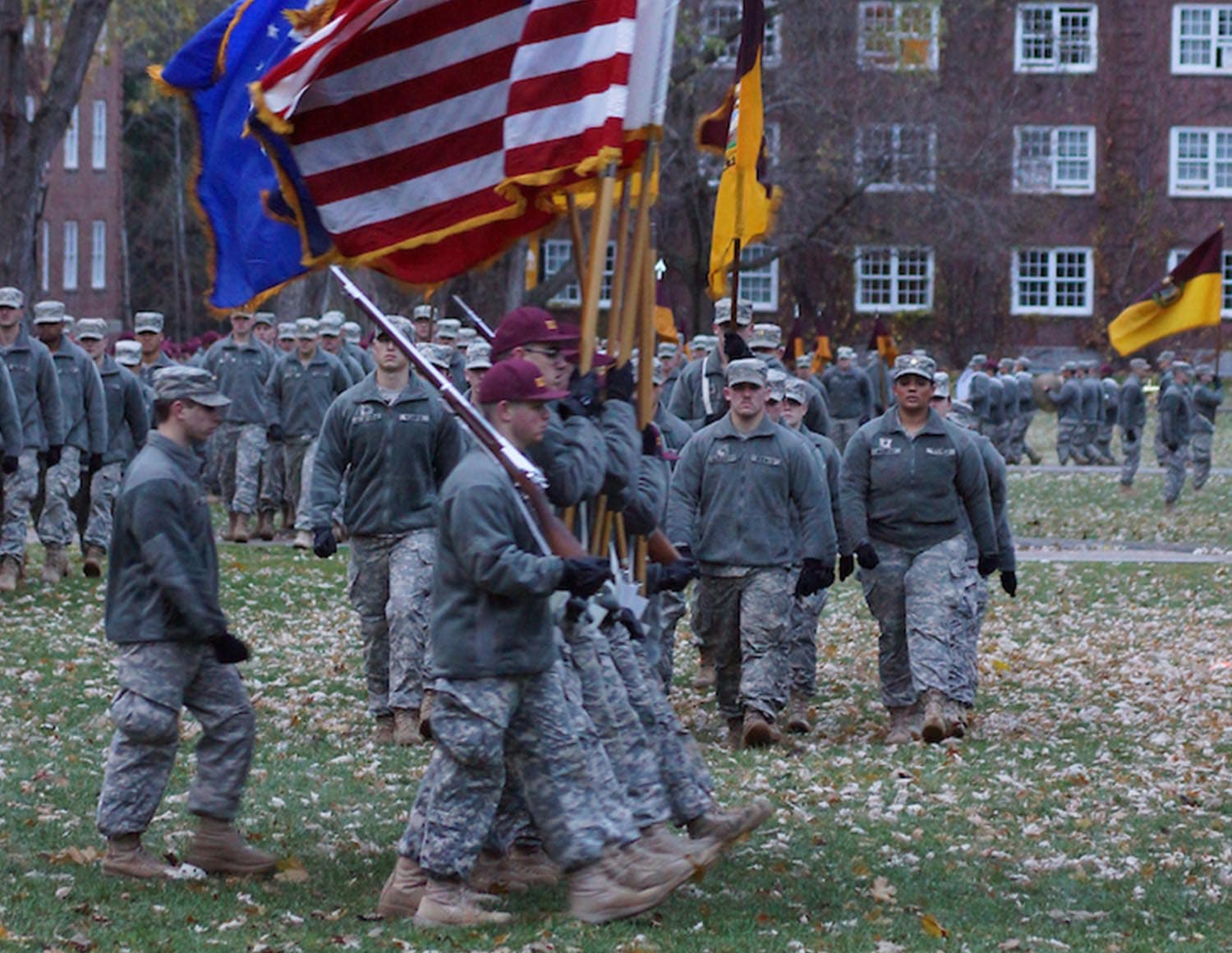 The Corps of Cadets’ traditional Veterans Day observance, with a review from the Corps of Cadets and remarks  from 1983 Norwich graduate and newly retired U.S. Marine Corps Lt. Gen. John J. Broadmeadow, highlights the coming week on Norwich University’s campus.

The Veterans Day observance, from 1:15 to 2 p.m. Tuesday — the day before Veterans Day — on the Upper Parade Ground, will include a review by the Corps of Cadets to commemorate the anniversary of the signing of the armistice that ended World War I. The review will feature the Norwich Artillery Battery firing multiple times during the observance’s “Roll of Wars” portion, and the placing of a wreath in honor of all veterans who have died.

The Veterans Day observance will include a review by the Corps of Cadets to commemorate the anniversary of the signing of the armistice that ended World War I.

Broadmeadow and Norwich University President Mark C. Anarumo, in his first Veterans Day on campus, will speak; the Rev. William Wick will deliver a benediction.

Broadmeadow retired from the Marines on Oct. 1 after 37 years of active duty.

His final assignment was in the Pentagon as the director of Marine Corps staff; he had previously served as a deputy commander of the U.S. Transportation Command.

During his Marine Corps career, Broadmeadow commanded a company in Somalia for Operation Restore Hope and a squadron in Iraq for Operation Iraqi Freedom. He also planned and executed logistics operations for Naval Task Force 58’s amphibious assault into Afghanistan immediately following the Sept. 11, 2001, terrorist attacks, and for the 1st Marine Division during the attack in Baghdad in 2003.

Broadmeadow also was the senior adviser to the 7th Iraqi Infantry Division as it assumed responsibility for operations in Al Anbar Province Iraq in 2008. He was promoted to brigadier general in 2009, commanded units in the Pacific, Afghanistan and the United States and served on the Joint Staff at the Pentagon.

Broadmeadow, the highest-ranking Marine officer to have graduated from Norwich, and his wife, Karen, also a 1983 Norwich graduate, are longtime members of the university’s Partridge Society. He received the Distinguished Alumni Award and has his name engraved on the Bicentennial Stairs.

Broadmeadow has returned to Norwich many times to speak. As the joint services’ commissioning official in 2018, he delivered an address touching on themes of service to nation and the importance of a military commission. In 2019, he was the keynote speaker for Norwich’s Bicentennial Gala aboard the USS Intrepid in New York City.

Click here for details on the Veterans Day observance.

On Wednesday, Veterans Day, the Norwich Army ROTC will conduct a 12-mile ruck march from 3 to 7:30 a.m. to honor armed forces members who defended the Philippine Islands during World War II. About 100 cadets will march, using Water Street and Dole Hill Road.

Norwich senior and Corps of Cadets member AnnaLeigh Runion will moderate the discussion, interviewing the faculty panelists about their experiences before they became professors. Click here for details.

From 12:15 to 1 p.m. Thursday, the College of Liberal Arts’ “CoLA Colloquium” series will address criminal justice perspectives. Matthew Fischer, an assistant professor of criminal justice at Norwich, will lead a virtual discussion on universal impartiality’s value as a predictor of public trust in police.

Guest speaker Pete Smith will deliver a virtual discussion on the aftermath of the U.S. presidential election from 7 to 8:30 p.m. Wednesday as part of the Master of Public Administration Speakers Series.

Smith, who delivered the keynote address at the College of Graduate and Continuing Studies’ virtual commencement in May, will deliver “After an Election, What Matters? How to Matter More.”

Smith brings broad life perspective, having worked in landscape design, sales and construction, national telecommunication sales and education. He founded his company SmithImpact in 2010 and published a book “Dare to Matter: Choosing an Unstuck and Unapologetic Life of Significance” in 2017.

Click here for a complete look at upcoming events at Norwich University.