Even in pandemic, this legacy isn’t lost 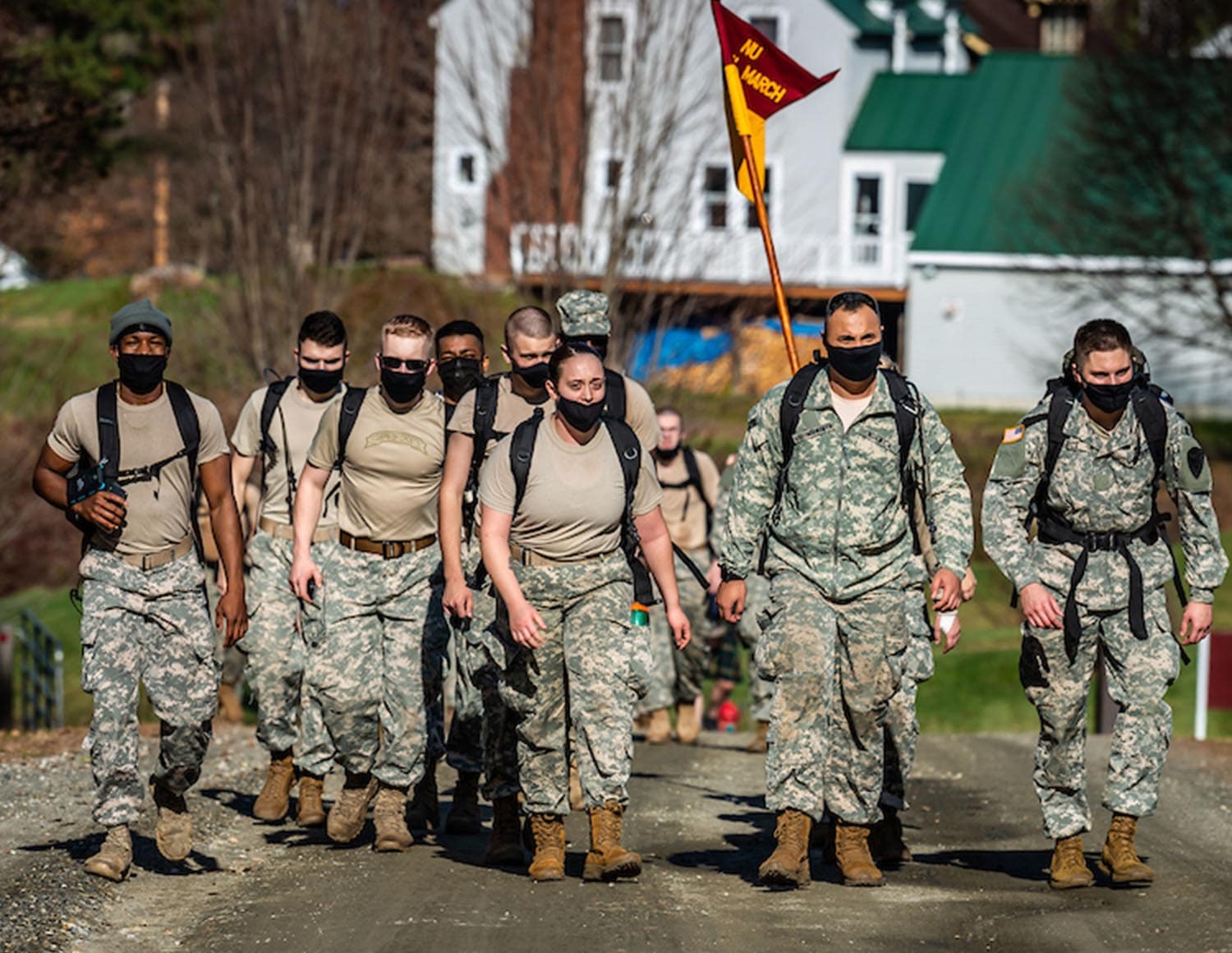 For the past three falls, Ethan Owens laced his boots, zipped his jacket and joined other members of the Corps of Cadets and Norwich’s community in the Legacy March, a trek from Norwich, Vermont, where Norwich University once stood, to its current location in Northfield, Vermont.

The three-day, 50-mile, usually 50-person trips re-created the historical movement in 1866 that brought the cadets from Norwich to Northfield after a disastrous fire on the original campus — and nodded toward the university’s service tradition, raising money for The Veterans’ Place Inc., a community-based, nonprofit, 26-bed, substance-free, transitional housing program. In 2019, the march marked its 10th anniversary, and coincided with the university’s bicentennial; a special concert by country music star Jamie Lee Thurston raised hundreds of extra dollars.

Over the years, the Legacy March has raised more than $30,000 to support Vermont and national veterans’ organizations.

“After spending many long hours planning and making several phone calls, (we) were able to ensure that the march would still go on, even if it was a little different.” 2020 Norwich University Legacy March Committee

Health protocols, which have kept students mostly on campus, in Vermont’s Washington County and in neighboring Orange County, meant this year’s march couldn’t go as far. Passing through Windsor County, as it had, was out. Overnights, like the one at a high school gym along the way were out, too.

So, Clarke Haywood, a 2012 graduate who succeeded construction management professor Michael Kelley as the march’s adviser, and Owens, a Civic Scholar who’s in his second year planning the march, adapted.

“COVID-19 threw everyone for a loop this year, and the Legacy March committee members were worried there wouldn’t even be a march,” the march’s organizing committee wrote in fundraising materials. “After spending many long hours planning and making several phone calls, they were able to ensure that the march would still go on, even if it was a little different.”

Owens said the march will stay in Northfield, mostly Paine Mountain, and go just for one day, 6 a.m. to 5 p.m. Saturday. The group, masked and physically distanced, will march 18 miles, or roughly what they’d have traveled if they’d followed the traditional schedule. The group will still visit The Veterans’ Place in Northfield, waving a removed hello.

Forty-eight marchers will participate; $5,300 has so far been raised for The Veterans’ Place this year.

Haywood, a former Corps of Cadets member who’s served as a Norwich public safety officer since 2018, has shared university history lessons on past Legacy Marches, especially at the gravesites and homes of Capt. Alden Partridge, the university’s founder, and former university President Truman Ransom, who first uttered the “I Will Try” motto. In an email, Haywood said students on the march believe in its service-oriented mission.

“The students are drawn to helping The Veterans’ Place,” he wrote. “There is an allure of recreating the spirit of the pedestrian excursions while learning about NU history and raising gifts for a cause. The students enjoy building rapport with the veterans and meeting other cadets in the regiment.

“It fulfills the idea of experiential learning and is unique for Norwich,” he added. “We have developed an affinity for this idea and it endures as a result.”

Lindsay Gordon, a junior in the Corps of Cadets who’s pursuing a U.S. Air Force commission, is participating in her second march. She joined the group last year, she said, because of stories she’d heard about it as a rook and because she wanted to see if she could go 50 miles.

“I’m so happy I was able to participate last year and make connections and lifelong friends while marching,” she wrote in an email. “I think this year’s march will be just as meaningful … no matter the length of miles, or amount of days, as long as we are getting out there and showing everyone that COVID-19 restrictions and (Centers for Disease Control and Prevention) guidelines aren’t stopping us from trying to support this institution.”

Owens, also a junior, who’s majoring in political science and history and is in the U.S. Army ROTC, said he enjoys the march for his historical lessons and immediate impact.

“This is one of these events where everything you do, you see the direct results,” he said. “The People at The Veterans’ Place are really nice guys … they were down on their luck and now they’re in this situation and they need your help.”