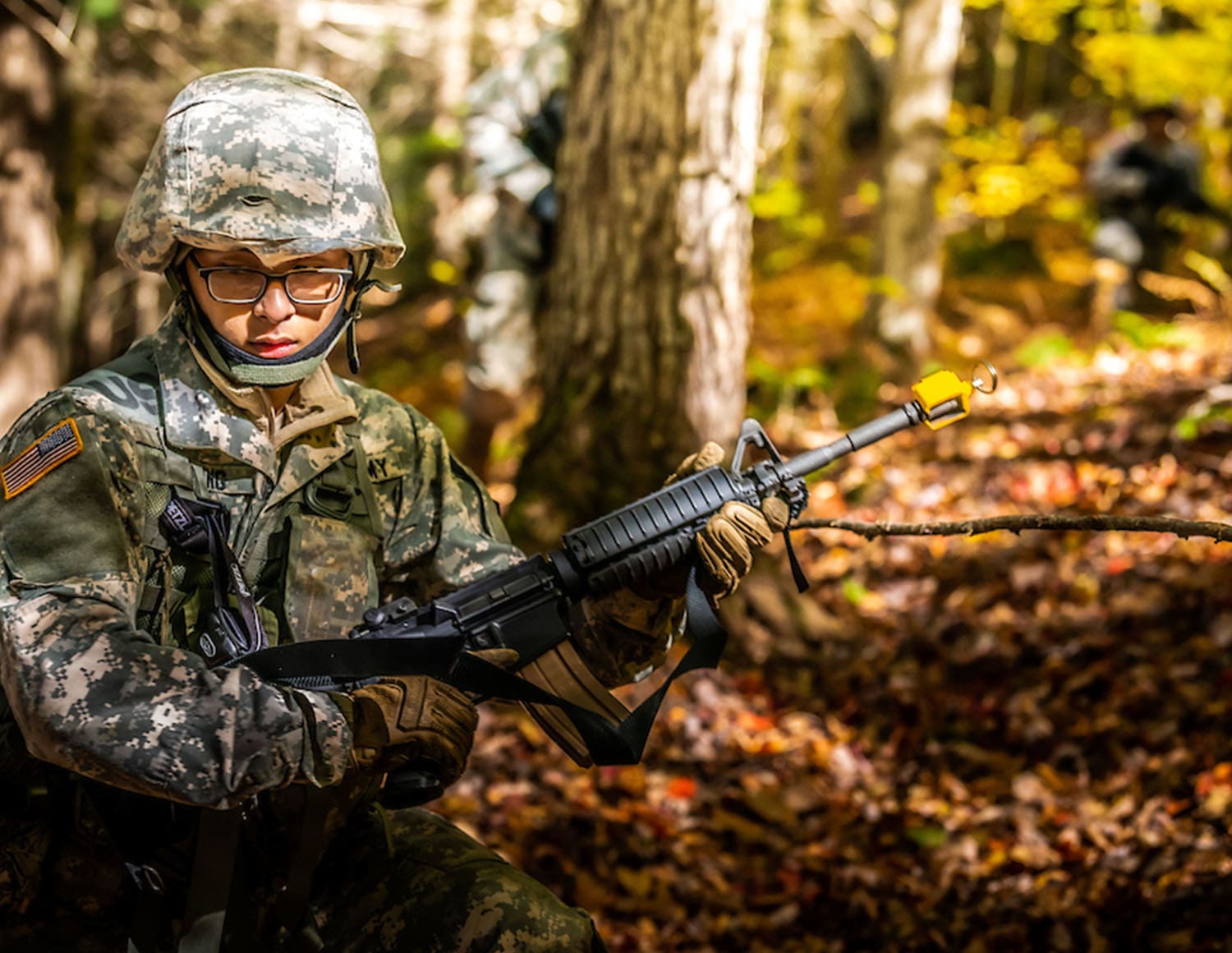 Before they can commission and serve their country, future armed forces personnel need a feel for the field. Last weekend, ROTC students sharpened their tactical aptitudes, during three days of field training exercises.

In an email, Garner wrote, “Cadets must learn how to move from one location to another using only a map and compass in both day and night hours. All of the training evolutions (had) the cadets moving by foot (dismounted), carrying personal and tactical equipment and actual M4 rifles.”

The Army cadets bonded as they learned, Garner said. Senior class cadet leaders mentored and advised their less-experienced colleagues. Garner said the exercises exposed the cadets to challenges they’ll likely face at Cadet Summer Training at Fort Knox, Kentucky, completion of which is required for a commission.

The training also boosted the cadets’ fitness, Garner said, as they ascended and descended Paine Mountain carrying loads of up to 50 pounds while managing the fluid and caloric intake needed to remain effective.

“To make our cadets successful at camp, (Army) cadre give the cadets multiple repetitions that instill confidence in their abilities and provide valuable feedback for use in continued training to become agile Army leaders,” he said. “Norwich cadets arrive to Fort Knox extremely well prepared, having been exposed to challenges we create to mimic those at camp.”

A show of flags

On Wednesday, to finish the celebration, students carried the flags of many of those nations to a spot by Jackman Hall and posed for photos.

“Being away from our families and our communities is not always the easiest thing,” Garcia, who comes from a Hispanic background, wrote in an email. “So, when this month comes, it reminds us of our roots, and gives us that sense of belonging again to where it feels good to embrace our culture.”

“Given that as a campus community, we’re limited in the types of programming we can sponsor at the moment due to the pandemic, it’s absolutely fantastic that these students took the initiative to safely gather and represent Hispanic Heritage Month,” Thomas wrote in a Wednesday email. “It’s a beautiful thing to see such enthusiasm and pride in action on campus.”

This weekend culminates with Parent and Family Weekend, in which 98 legacy students — those with relatives or parents who are attending or have attended Norwich University, gathered mostly virtually to celebrate their common college ties.

Many traditional Parent and Family Weekend elements returned for the festivities, including a Review with Retreat from the Corps of Cadets, the Rook Military Skills competition, and the Pinning Ceremony, although they were adapted for the coronavirus pandemic. The pinning, for example, happened under a tent on the Wise Campus Center green instead of Sabine Field at Haynes Family Stadium. Legacy freshmen received pins from siblings or other on-campus relatives or from guest proxies including President Mark Anarumo and Provost Sandra Affenito.

“It’s a huge deal to the families,” Habeck said. “You were an alum, and now you get to see your kid attending here. And the pinning is a moment to say, ‘Hey, I’m proud of you for being here.’”

Many Parent and Family Weekend activities are free to view on NUTV, a channel broadcast on the Alumni and Family Relations web and Facebook pages. Click here for the weekend schedule and broadcast details.

Beyond Parent and Family activities, this weekend will feature Sunday’s five-on-five paintball team challenge from 10 a.m. to 5 p.m. at Shaw Outdoor Center. Equipment is provided in this Campus Activities Board activity; all students can participate for free. Click here for details.