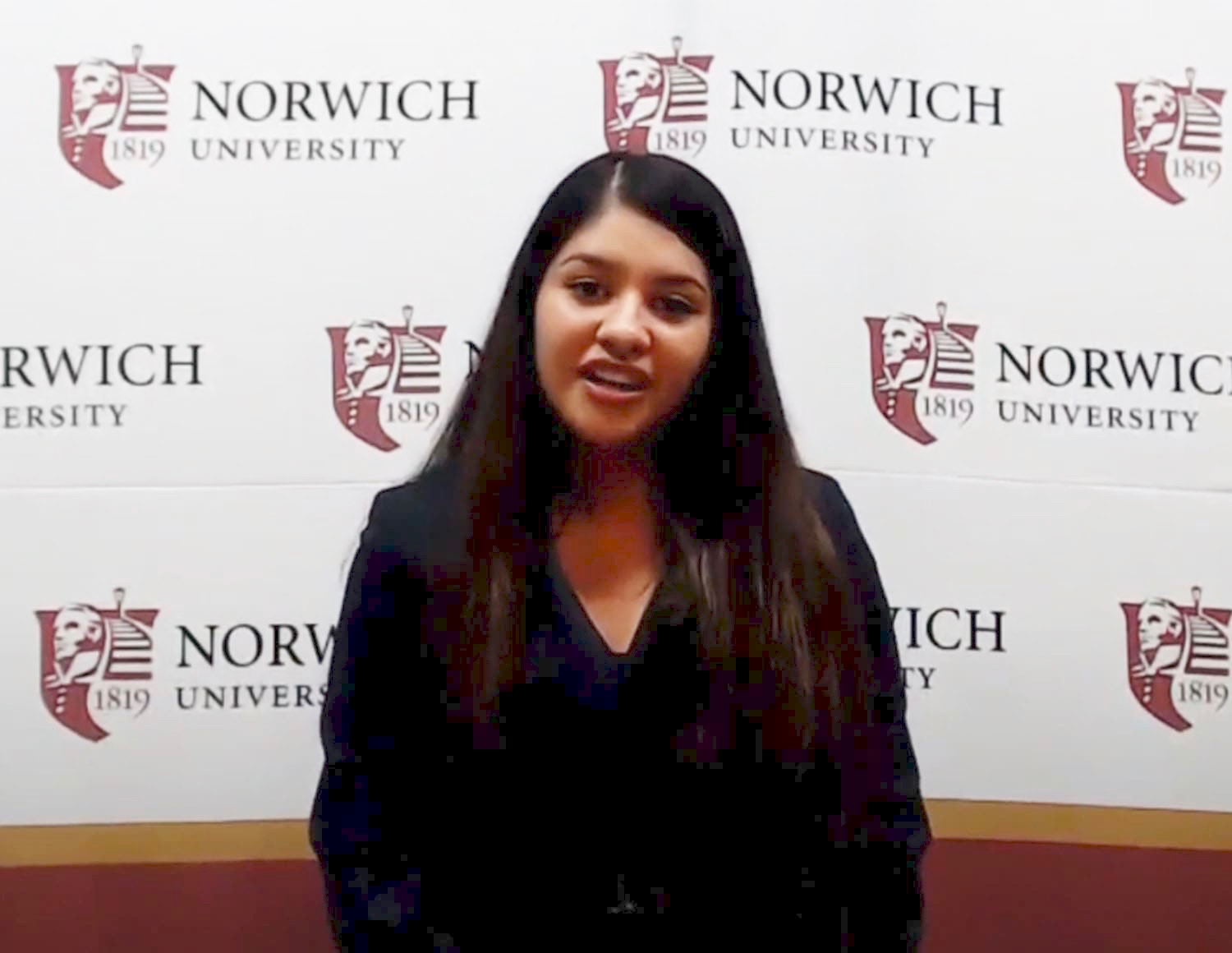 Navarro, a senior political science major from San Antonio, had earned her chance to present at the Symposium, a 26-year-old event presented by the John and Mary Frances Patton Peace and War Center and the Center for Global Resilience and Security.

Dr. Travis Morris, the Peace and War Center and symposium director, and an associate professor of criminal justice, had chosen Navarro as the 2020 research officer for the Olmsted team, which was ready to visit Egypt in the spring, until the coronavirus pandemic intervened.

“Being a part of this unique military symposium with scholars from all around the world has been the biggest honor and has allowed me to be able to further my education outside the classroom.” Nicole Navarro ’21, Richard S. Schultz ’60 Symposium fellow

She earned the 2020 Richard S. Schultz Symposium Fellowship, which lets Norwich undergraduates from any academic discipline pursue inquiry and experiences to better understand the past and its effect on the present and future.

Time as debate team president had put her onstage in front of an audience to deliver under pressure before, but this moment was big. She would speak on China’s weaponization of water to control ports and trade in Tanzania.

If she was nervous, it didn’t show in her delivery. She was ready.

“(I) had already conducted some research about Egypt’s water security, so this drew me into applying,” Navarro, who plans to commission into the U.S. Navy in May, said in an email. “Being a part of this unique military symposium with scholars from all around the world has been the biggest honor and has allowed me to be able to further my education outside the classroom.”

“The interviews I conducted with experts all around the world has allowed me to be more educated on the military operational assessments that occur between countries and how water plays a critical role in those assessments,” Navarro said. “As a future Naval officer, the policy recommendations I made are a step forward to be able to educate more junior officers about the historic and current relationship with the maritime Silk Road.”

China’s global “Belt and Road” infrastructure initiative, launched by President Xi Jinping in 2013, aims to create a “maritime Silk Road” along the sea corridor south from China to the Middle East and Europe. The Brookings Institution estimates China’s government has spent $50 billion to $100 billion annually on the initiative.

After her talk, Morris asked Navarro what advice she’d have for next year’s Schultz Fellow.

“Choose your advisers carefully and utilize them, because they obtain knowledge you probably would have never thought of,” she said. “And if COVID-19 still exists, your inability to travel abroad shouldn’t be a huge barrier. … Utilize that as a challenge to be able to conduct (research) virtually. … Use that information to hit the ground running and really challenge yourself.

“I am very grateful for this opportunity, because I was able to expand my education outside the classroom and this undergraduate fellowship has definitely influenced my career.”

Alex Rollins, a senior with a dual major in history and studies in war and peace, joined Navarro in shining during the symposium, receiving the 2020 Carlo D’Este ’58 Military History Award. Retired U.S. Army Col. Jerry Morelock funds the $1,000 award to honor D’Este ’58, who co-founded the Military Writers’ Symposium and the Colby Award. Rollins, who attends Norwich on a four-year U.S. Army ROTC scholarship, is on track to commission into the Army in May.

Morris said the symposium adjusted well to the new format. Although the live event would have included a big local audience — the whole Corps of Cadets in the audience after a march-down — the online audience was global and the largest ever. Eight hundred people registered, Morris said, from around the United States and beyond — Canada, Sweden, Iraq and Kosovo.

“In every session, we had more questions than time,” Morris said, citing a measure of the symposium’s success. “The overarching question was, ‘Could we pull off a virtual Military Writers’ Symposium?’ And the resounding answer is, ‘Yes.’ That to me was something to celebrate.”

Videos made for the symposium, including one of President Mark C. Anarumo introducing the event, helped attract viewers before the event, Morris said; a video of the individual lecture sessions and the centerpiece “Weaponizing Water” panel with supporting B-roll imagery, will draw viewers afterward.

Morris said he hoped to create a similar panel discussion video in following years, as it could stay on the symposium’s website and be sent to audiences beyond the university.