At virtual Commencement, moments of grace and gratitude for a beloved leader 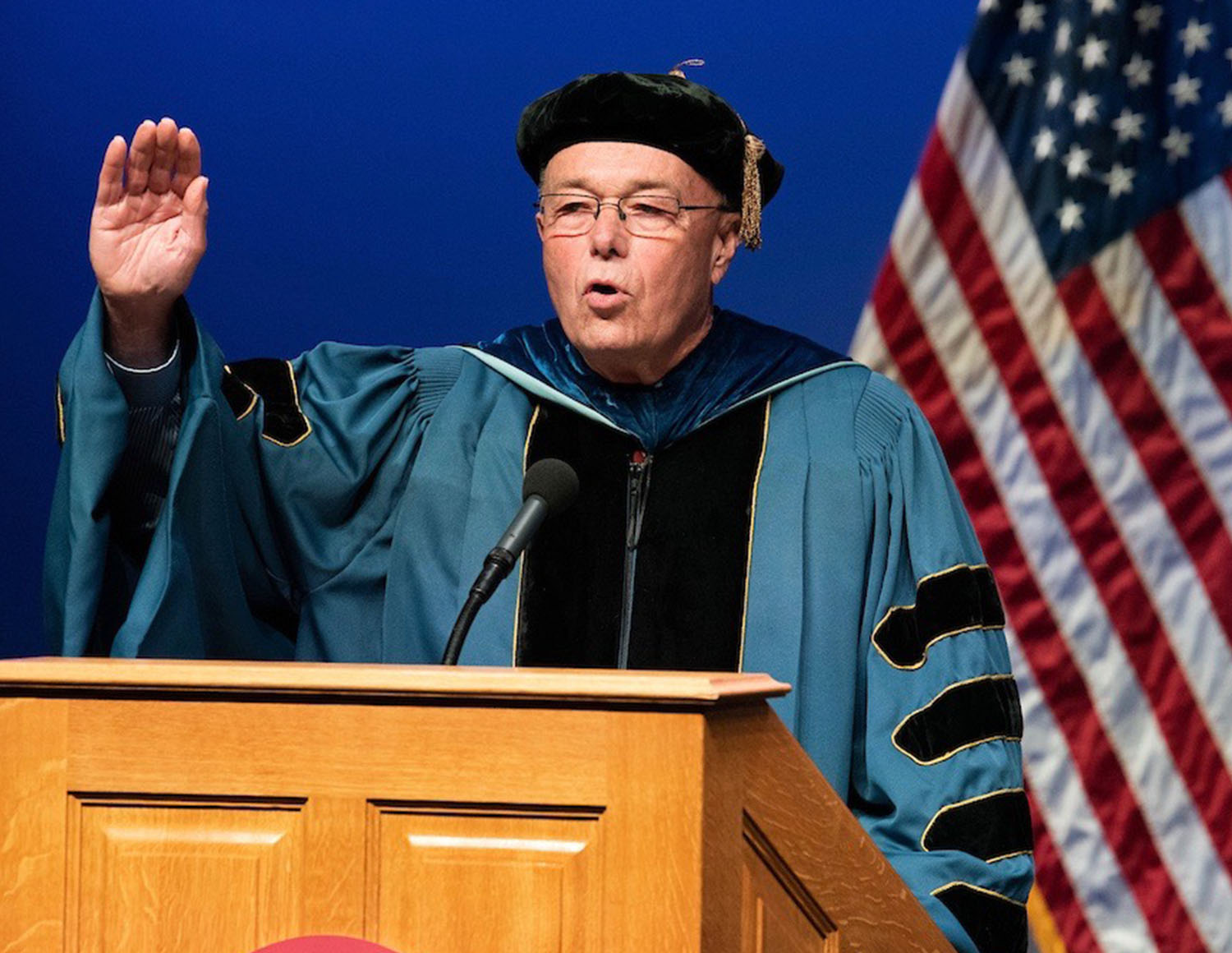 The audience seats were empty, but hearts were full when the Class of  2020’s Commencement finally arrived at Mack Hall, especially President Emeritus Richard W. Schneider’s.

Although the coronavirus pandemic had chased the ceremony from its usual spring slot and its usual Shapiro Fieldhouse site, many traditional touches remained for the Sept. 12 online version. The Regimental Band played the national anthem. The Rev. William Wick gave the benediction. President Mark C. Anarumo offered greetings and congratulations. And President Emeritus Richard W. Schneider kept his promise, returning to deliver the keynote.

Anarumo said the university was conferring 683 bachelor’s degrees and 12 master’s degrees. Three hundred eighty students graduated with honors, he said; 15 graduates hailed from 11 countries. One hundred sixty-four students had or would commission into the U.S. armed forces.

“All the things I enjoy doing are manifested in this job.” Norwich University President Emeritus Richard W. Schneider

“Today we celebrate your accomplishments during your time at Norwich,” Anarumo said, “and look ahead with anticipation to everything that you may do next.”

He led five fundraising campaigns, all of which exceeded their goals. They collectively raised $272.1 million.

A video-in-the-video farewell to Schneider, who’d had a building renamed for him earlier in the day, played before he spoke. In the farewell video, dubbed “Underway,” Schneider, ever the master storyteller, recounted his seafaring grandfather’s heroic example, active-duty service in the Coast Guard, fighting in the North Atlantic and Vietnam, the birth of his four daughters, the illness and death of his first wife, Beth.

“What drives me is doing things for other people,” Schneider said. “That’s why I joined the Coast Guard, to save other people who were in trouble.”

He described becoming a Coast Guard reservist and pursuing academia because he loved teaching. He never thought he’d be a college president.

He earned his doctorate at the University of Delaware, where he spent a decade. He worked in high-level positions at Drexel University in Philadephia. And, in 1992, he came to Norwich.

“When I arrived, it was clear to me we had to get back to the things we did really well,” he said, recalling how he went through the university’s 1843 mission statement. “I can tell you honestly I believe that I have lived every day executing on Capt. (Alden) Partridge’s vision. ... Every day, I came in trying to do that.

“All the things I enjoy doing,” he added, “are manifested in this job.”

Schneider told the 2020 graduates how he’d wanted to join their celebration in person, stopping for hugs, posing for selfies. Schneider said he hated how the coronavirus had robbed them, and him; he promised to return to campus to recoup those moments and take those pictures someday, when the coronavirus is vanquished.

“It’s people, it’s mission,” Schneider said, describing what matters. “I’ve loved the people at Norwich and I love her mission. The real joy of being president is watching (students) all grow up in front of you.”

Schneider said he labored over what he, a 74-year-old at the end of his career could tell young people, many in their 20s, who are starting theirs. He settled on values. As he’d done many times before, Schneider said Norwich’s Guiding Values of honesty, integrity and service, are durable and reliable as Vermont granite. People who follow them will never disappoint their nation, or anyone in it.

“I love you,” Schneider told the graduates. “I love you like my son and daughter, like I love my parents or my grandparents or my cousins, my nieces and my nephews.