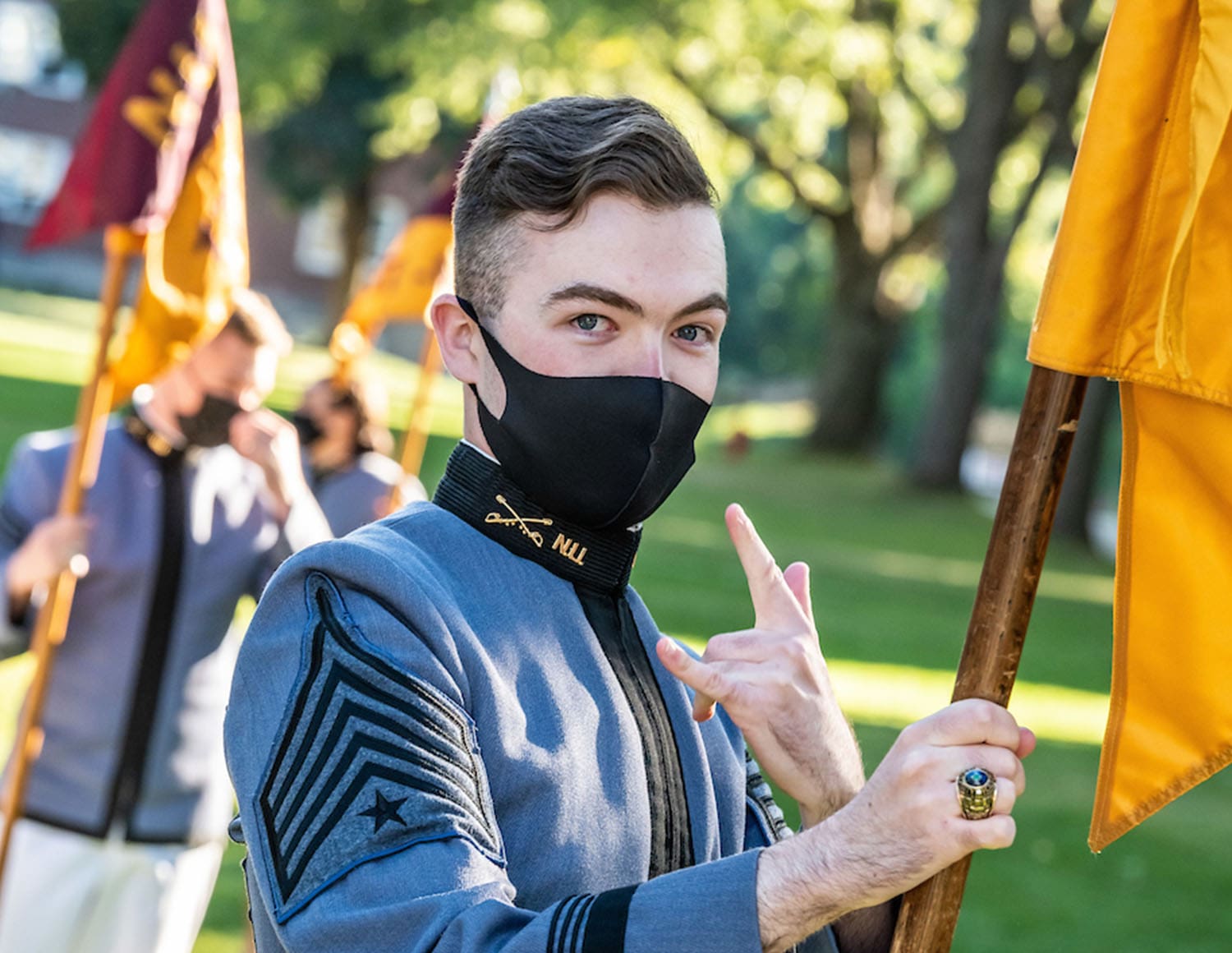 Peer-elected committee from each class devises look of momentous mementos

The rings, introduced in 1923, feature a class crest on one side and Norwich University’s crest on the other. The Norwich crest side is also called the 1819 side, for the university-founding year stamped on it.

In the 1970s, silver, gold and stones for a ring-topping bezel were introduced.

The civilian ring was first planned in fall 1989 at a meeting of the Board of Fellows and the Vermont College Student Government. A civilian ring tradition was started in 1990.

By tradition, cadets wear their rings class crest-side up until graduation. Then, wearers turn the rings Norwich crest-side up.

A 10-member class Ring Committee designs the class side of the Corps of Cadets’ ring during the sophomore year’s spring semester. In the preceding fall semester, the committee is elected online. In recent years, 70% of the class, on average, has participated. (For contrast, 55% of voting-age Americans turned out for the 2016 presidential election).

The rings’ Norwich side features cavalry sabers, to link graduating seniors to Vermont’s first cavalry. It also features the Norwich University Corps of Cadets scroll; the Norwich shield, depicting a cannon and an engineer’s transit in front of a mountain range that’s bathed in a rising sun’s rays.

The cannon represents the university’s military heritage; the engineer’s transit represents Norwich’s academic mission; the sun rising over the Green Mountains represents the light of knowledge flowering on The Hill.

The Norwich shield features an eagle to symbolize the school’s and nation’s strength. The eagle grips an honor scroll, representing loyalty, courage, truthfulness and self-respect, in its talons.

The Norwich side also includes the school’s “I Will Try” motto.

As the Norwich Guidon student newspaper reported, cadets often order two different class rings once they have earned the right to wear them — a garrison ring and a field ring.

The garrison ring, a gold ring with a stone, is the larger, flashier ring. The field ring, introduced in the 1990s, is typically made of a lustrium metal alloy, often nickel and chromium, and can come with or without a stone.

Also by tradition, students inscribe a message inside their rings. The messages are kept mostly secret, but students said they often relate to their Norwich experience. Shawnae Evans, a senior neuroscience major, for example, said her inscription relates to the deep camaraderie she’d built with her drill team. Nick Kandra, a senior criminal justice major, said his inscription relates to his bond with the men’s lacrosse team, for which he’s played goalie.